Is there a limit on number of tracks per album? [Solved - Split Into Multiple Disks]

I extracted the 24/48 flacs from the Blu-Ray audio Ring of the Nibelung opera cycle from Sir George Solti, and I noticed that the last two tracks didn’t show up in the album listing, even though they were in my library, correctly tagged. I can play both of these tracks if I search by track name in Roon, and they show that they are from the same album as the other tracks, but when I list the album in Roon, those last two tracks are omitted, so it stops playing the album at the end of track #176. The entire album is 178 tracks, so I wondered whether there is some sort of 176 track limit for albums?

Thanks for contacting support, I’d be happy to assist here. I do indeed believe the limit is 180 tracks per album as mentioned in this thread:

well, fix is not quite the right word… i raised the limit it to 180 – the real fix will come later… this is not small. the problem is in the performance of the graphical layout engine in this particular layout.

This limit is set to maximize performance of the graphical layout engine. If you want, you can split the tracks into multiple “disks” as the users have done in this thread:

Is there a limit to the number of tracks listed in an album? Roon Software

I created an album that has the 500 songs that Rolling Stone identified as the greatest of all time back in 2004. I noticed in Roon that only the first 119 tracks are shown. Curious what is causing this limit? I know I can easily break up the album into 5 “disks” with 100 tracks each but I prefer to be able to scroll through all of them in sequential order rather than having to select each disk in the Roon album view. Can someone please explain this limitation to me?

Why the last two tracks are not showing up is not clear, are those tracks by any chance under “Skipped Files”? You can check in Roon Setting -> Library -> Skipped Files, this option should look like this: 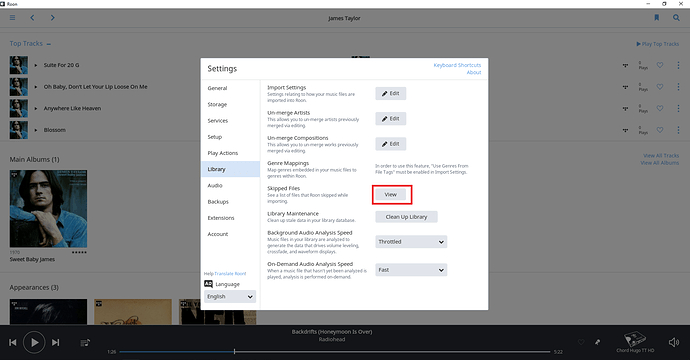 Please let me know if this helps.

Thanks so much. Splitting into multiple disks fixed the problem for me.

Glad to hear that splitting into multiple disks has resolved the issue, thanks again for contacting support!