Is there a way to roll back versions? CPU usage 50-70% maxing out my computer

From versions 1.5 to the present (1.6), CPU usage used by Roon flits from 30% all the way up to 120%. This makes my computer unusable when Roon is in operation and playing music. When it idles, it seems to be better, but it still taxes my computer. I want to downgrade to a more stable version. Or have this issue remedied. Very frustrating.

I know this isn’t what you want to hear but here goes. A 2012 Mac is elderly. Not so old it simply cannot run Roon, but certainly so multi-tasking is unlikely to be smooth running. Your problem is also made worse by the fact you do not seem to be reporting any issues with Roon operation, but with its impact on other things you do with the machine. Roon doesn’t support old versions and I don’t think they will contemplate supplying them but I suppose you won’t know unless you ask.

I have a 2011 Mac mini and it works just fine for Roon core and playback, idling at a few percent CPU usage only.
Have you restarted the core?
Is the core analysing media?
Hopefully @support will grab some logs Freon you and identify the problem.

As mentioned in our Knowledge Base, downgrading to previous version of Roon is not supported and can cause database compatibility issues.

Generally speaking, Roon is designed to be a somewhat heavy app, as it is often performing functions in the background such as updating metadata, scanning storage locations, checking for library changes, analyzing media files, ect.

Can you let me know some additional info here?

Hi Noris, please accept my apologies for the late reply. I haven’t had much time to consider these questions. See below for my answers

Do you have any active “tutorial” bubbles present in your Roon app? These are little circles that hover over words and contain instructions.

You mean the kind that appear when you run the app for the first time? Tutorial bubbles? I thought no, but I’ve seen the odd one appear.

Is there an activity spinner present in the top right-hand corner of Roon?

Is the behavior the same if you temporarily disconnect the OSX from the network and use Roon in an offline state?

You mean playing through my System Output? Yes, but the performance does improve a lot. This is what it was like when I first began using Roon a few years ago. As we speak I’m listening through System Output and it seems okay/very much usable.

Does rebooting the Core help?

What exactly are you symptoms here? Are you seeing dropouts, media loading slowly, UI unresponsiveness, ect?

I rarely see dropouts or any other issue related to Roon. Rather, the performance of everything else on the system is laggy by 3-4 seconds. Many apps lock up. I’ve opened the Activity Monitor a few times and CPU usage maxes out during these periods and many system services appear to go down as well. Most notably, one that appears to be connected to iCloud syncing. They never appear to lock up or freeze when Roon isn’t playing, however I’m less likely to monitor when system performance isn’t an issue. Perhaps it isn’t Roon but the system causing the issue? I can try rolling back OS but not for a while. Love to try something else before that. If you take a look at the below picture, that gives an indication of what happens on the system. I hadn’t interacted with Roon but for some reason it just spiked and froze my system. I was reading an article at the time. 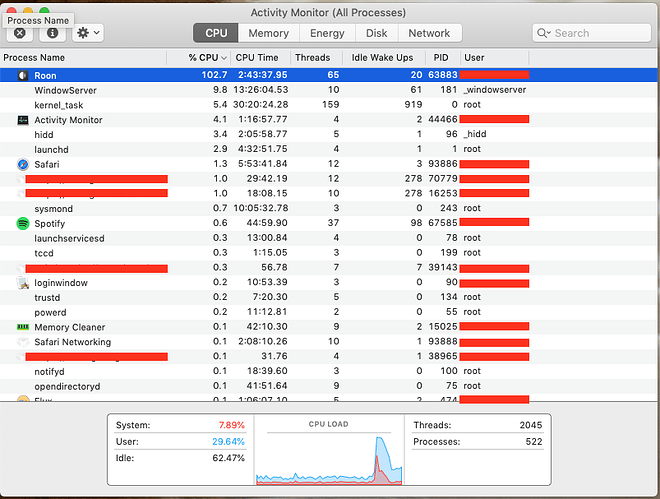 How large is your library? What is the total tracks/album amount listed in Roon -> Overview?

Thank you for providing that information.
I have followed up via private message for next steps.