Is there a way to ungroup boxsets if you want to?

Hi, this is my first post here. Up till now I have been lurking around reading and absorbing knowledge, and I have been very satisfied with how Roon works

But now I have a minor issue that keeps bugging me and I can’t get may head around it. I did a search here but I couldn’t find a similar topic. If I somehow missed it, I apologize for doubling the issue…

My problem is as such: I recently added the 4CD ‘Radio Gnome Invisible Trilogy’ boxset by Gong. I uploaded the 4 album folders to the Gong folder on my NAS and Roon grouped them together for me. Usually, that is no problem for albums with multiple discs, but in this case I want to have them separated because it’s four separate albums (Flying Teapot, Angel’s Egg, You and Est-Ce-Que).

They are part of a boxset, I agree, but I would like to have them separated into album level directories. So I used the Yate tagger to make sure there were no Disc Number tags left in the metadata (in fact, I stripped the metadata down to the bare necessities of Artist, Album, track titel, track number, Year, Genre and individual artwork) but after a forced rescan they are still grouped into 1 album with 4 discs, all called Flying Teapot (Radio Gnome Invisible, Vol. 1) and all with the same artwork.

That is probably how Roon has this boxset album in it’s database, but is there a way to separate it’s contents?

All I could think of was deleting the album from my Roon library and from my NAS, then do a full re-index, and then upload them separately with a full re-index after every single album. That will probably work (although I have found it difficult at times to ‘outsmart’ Roon

It’s messy. You need to hit the edit pencil for the album, then “Fix Track Grouping” and remove the tracks from the albums you don’t want individually.

I do hope Roon can come up with a more elegant solution. (There may be one, but not that I know of).

What folder structure do these 4 albums have ? Are they in four folders called \flying teapot, \ angels egg etc? Or are they in \boxset\flying teapot etc?

They are structured like this (hope you understand what I mean):

The metadata does not contain any information about the boxset, nor does it have disc numbers hidden somewhere below the surface. Just Artist, Album Artist, Album Title (to which I added [2015 RGI Trilogy] in the same way that I also add [24/96] for HiRes recordings), Track Numbers, Song Titles, Year (1973), Genre, Number Of Tracks and the artwork. No User Definable Text or anything else.

This morning, I deleted the album from my Roon library again (so it was also gone from my hard drive in the NAS, did a complete forced re-scan to be sure and uploaded just The Flying Teapot with it’s own unique cover art with the green goblin flying in his magic teapot.

Did another re-scan and Roon immediately identified it as part of the boxset, named it Flying Teapot but added (Radio Gnome Trilogy, Vol 1) instead of my addition [2015 RGI Trilogy], that got completely lost by the way, I could not find it in the editable data, and gave it 2015 as YOR and the new artwork of the boxset.

) but I am trying to understand what’s going on. In most cases, grouping multiple-cd albums like this can be an advantage, but with this particular boxset, like I already explained, I would like to have more possibilities to edit or just click an option like ‘use metadata from file only’. Since I am (and always have been) very ‘autistic’ about my metadata (I mean, I have over 7200 albums on my NAS so I paid for a better, more intuitive tagger) I can’t help but feeling a bit uneasy about this…

I will do a completely new Transcode to my NAS, using XLD, and I will check the metadata again before I do another re-scan, and we’ll see what happens

You can use meta from the files only. It’s part of the track edit options. 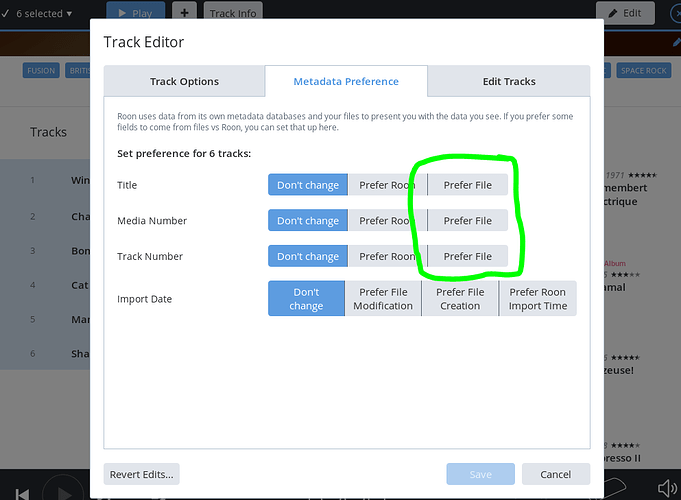 Also, when you look at the options that the album could be (identify album option) does it not show the original album as well as the box ?

Here is a similar example 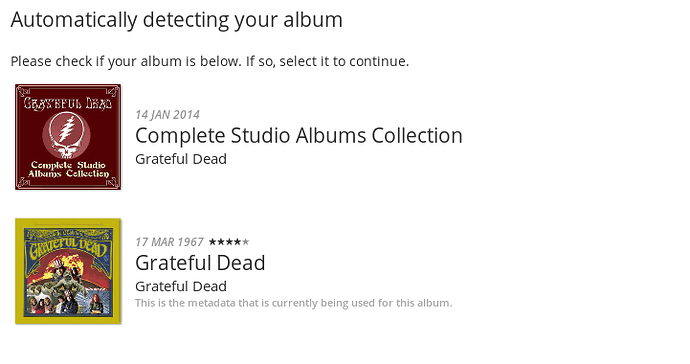 Ah, thank you, another feature that I hadn’t found yet. This player just keeps getting better and better…
Thank you, that first one definitely worked for me.

The new upload I tried did not fix the problem at first, but the option to let just the 6 tracks on this album use their own metadata did. Well almost, I still didn’t get the original artwork, but you second tip took care of that, so thank you again

Check the second option also. You may get all the rich album data too.

I did, and it worked great!

Simplest way to think about this is that the disc has identical info but exists on its own AND as a box set.

Consider Roon ID as flipping a coin here. It could be either.

So, you have the “identify album” option to select the preferred option.

Even within albums you can get reissues, bonus discs, extra tracks etc. Often you will find these as options within a specific album.

Plenty more things to discover as you go…

Hm, looks like it still does.t work. Now that I have added the next three albums as well, Roon insists on putting them together as a boxset again, and when I change the title of one album using the method described above, it changes the setting for all 4 albums in the boxset. There seems to be nothing I can do to change it back to individual albums, and that is crucial to getting this right…

Getting a bit grumpy now, but that’s also because I have an empty stomach… I have been at this too ling so I will call it quits for today, go and eat and see what I can do about this first thing tomorrow morning…

Please paste a screen shot of the folder structure and also how it shows in Roon.

I’m not sure if you have the albums stored as

Get something to eat

This may take a day or so to get it all done, lots of things to do in the office tomorrow (one of which is setting up an extended review of Roon, by the way) but the way my Gong folder is structured is like this:

I still have to add the other three albums of the boxset, but they will look like the file nearest to the top but with different names. Inside the file are the tracks (no more subfiles).

When I open the files on my NAS in the Yate tagger, it looks like this 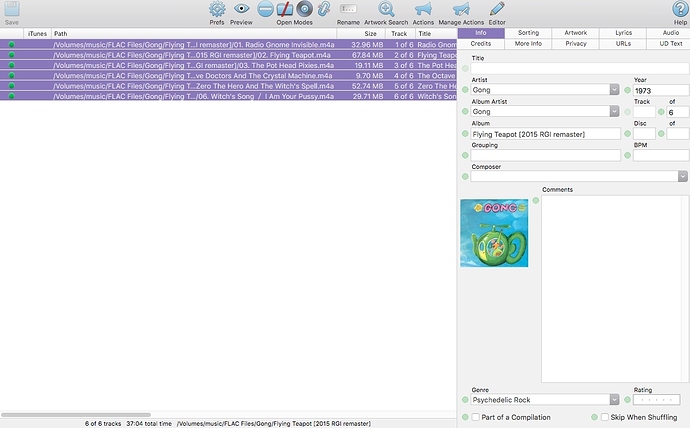 The only other tab on the right that is of importance (I guess) is UD Text (User Definable) but that’s completely empty.

I have just uploaded 1 of the 4 albums and did a re-scan. No editing of fields or ‘re-identify album’ yet. The new album is marked red: 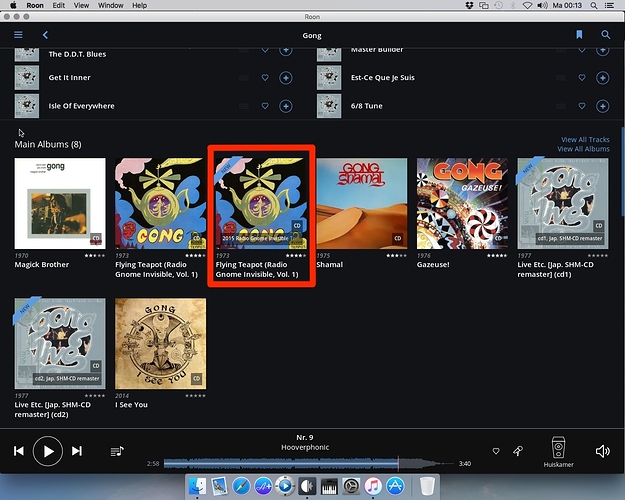 As you can see, the unedited album has different artwork to what you see in Yate, and ‘my’ artwork is not there when I open the ‘Edit Fields’ screen: 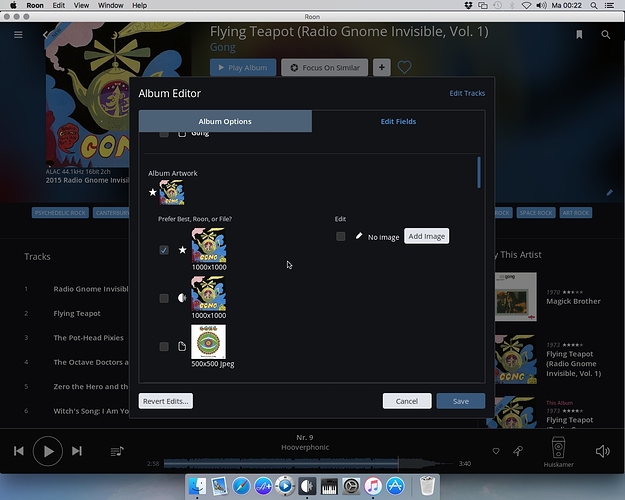 It’s not a great problem, and I could fix it by simply uploading the desired artwork to Roon, but the alternative ‘teapot’ album art is just fine I guess, even though I already use that for the non-remastered version you see next to it. What I find remarkable though is that ‘my’ image is just not there at all.

That’s all I have so far, I will try to upload more images tomorrow, showing the rest of the albums and the way Roon groups them (or not) after I upload them individually by re-transcoding them with XLD and doing a re-scan in Roon after each individual upload. I’m off to bed now, it’s 00.30 h…

I’m sure I’ll no doubt run into similar issues when I start sorting my box sets (I’m waiting for full metadata editing before I embark on this). But I just came to say - great albums! I love Gong, nice to see another fan. Groets!

Well, it didn’t work, no matter how I tried, so I kinda gave up. But no worries, that was after I came up with a near-perfect compromise.

I fiddled with the folder structure, the metadata, the artwork, but I guess that Roon decided to remember that I manually renamed the boxset to Angels Egg [Radio Gnome Invisible, Vol. 1] at one point and kept tagging (and indexing] it like that.

But then I thought: “this is distracting me too much from enjoying the rest of it”, so I came up with the best possible compromise, re-uploaded the four cd’s to my NAS, did a re-scan in Roon, set the 4 discs to use their own metadata, changed the album title to Radio Gnome Invisible Trilogy [2015 remaster] and added new artwork that shows all 4 albums that are in the boxset in chronological order. Like this: 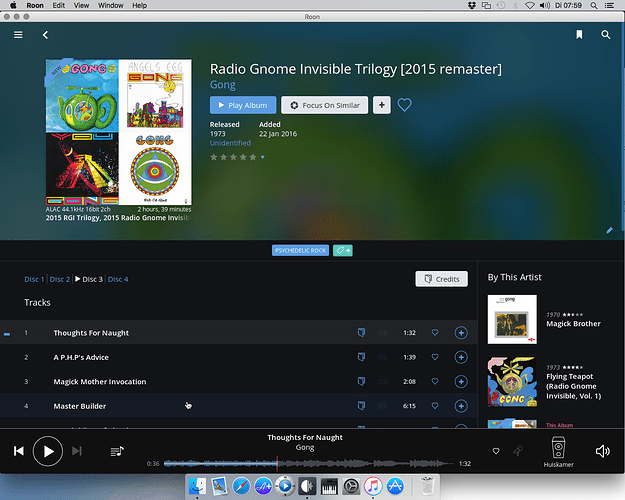 This works for me, and I’m completely happy again. Like you guys at Roon I always aim for perfection, but sometimes we need to accept that 99,99% may have to do. There is no need to change the software for the very specific needs of just one stubborn Dutch guy

Maybe I will stumble upon another solution one day, but if it stays like this, it’s fine.