I’ve found when using volume leveling (track) in roon that the subjective volume levels are seldom matched on otherwise-identical tracks taken from different masterings. Since roon is the first music player I’ve used that utilizes R128 for volume leveling rather than replaygain, I figured that R128 was the problem since it was designed for general broadcast programs and not solely for the dynamics of music. It seems that roon isn’t doing the right thing while leveling on playback.

Here is the information on the track “Lovers in a Dangerous Time” from two editions of Bruce Cockburn’s Stealing Fire album.

Here’s the track “Maybe the Poet”

The deluxe edition is mastered much louder, and this is clearly seen in the track position waveforms.

When Volume Leveling (track) is turned on and Lovers is playing, the signal path diagram shows the following “Volume Leveling” gains:

There is 4.5dB difference in recording levels between the two tracks. (Deluxe should be reduced by 10.3dB to match the R128 reference level, while First should be reduced only 5.8dB to get there.) Yet roon lowers Deluxe by 1.3dB and only raises First by 0.9dB, resulting in only 2.1dB of playback level correction between the two. The Deluxe track remains about 2.4dB louder per roon, and is audibly louder.

We see the same results with Poets. The signal path shows these “Volume Leveling” gains;

Here we have corrections to some reference level differing by 2.2dB, while the track recording levels differ by 5.1dB.

Here are my zone settings: 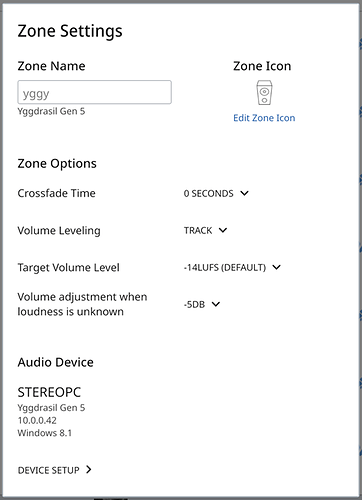 And here’s the signal path playing the first track mentioned above: 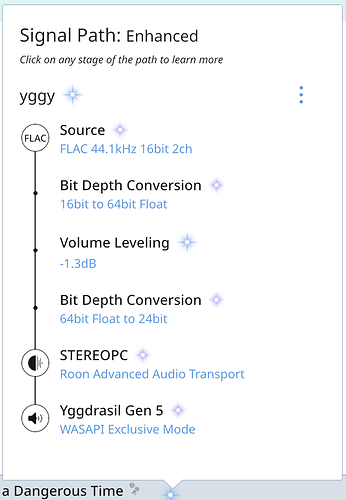 Thanks for the report! Can I please request that you upload the media you used for testing to a shared Dropbox / Google Drive / Send.firefox.com folder and private message me a link?