Jazz at the Pawnshop -- wrong artist

My version of Jazz at the Pawnshop has a wrong artist - Alice Babs, but should have been Arne Domnérus as i also have in my metadata.

The album version is the 3-disc version containing the entire event, originally bought from HD Tracks.

No option to find the correct album if you do a search?

Roon really needs the option to edit the metadata - but whilst maintaining the link to the correct album in Roon’s database (to get all the extra tasty data).

Unfortunately no. The suggested metadata is this:

My version of Jazz at the Pawnshop is the Vol. 1 - 3 combined to one version. The metadata in the ‘Alice Babs version’ is correct - but wrong artist and title - missing the ‘the’.

Totally agree with your opinion about editing the metadata.

There is several versions of this performance. There is also a ‘2-disc version’ (Vol. 1 + 2), which is the version that can be purchased at the moment at ex. HD Tracks.

I have both the 2-disc version and the “3 Volume SACD” version (converted to FLAC).

The 2-disc is ‘Unidentified’ and the SACD version as Alice Babs, but is not linking the two, given there will be duplication of some of the tracks.

I believe these are correctly identified by Rovi, so it depends on the metadata source being used. 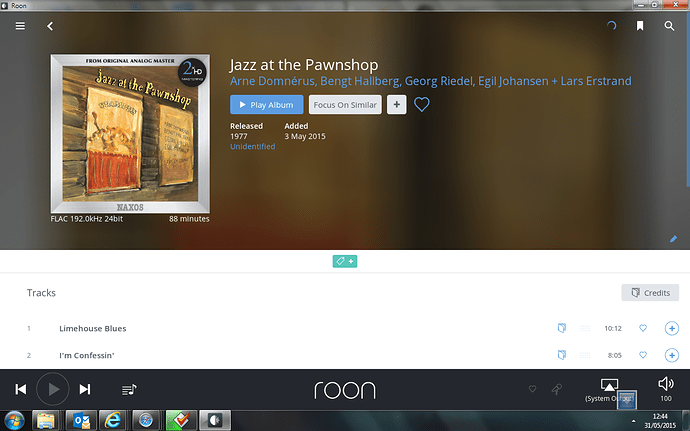 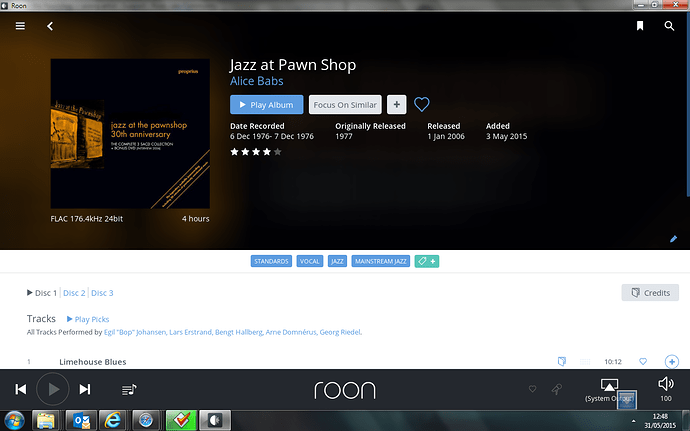 Hopefully the guys at Roon can correct the metadata…

At the moment i have 68 albums (of 2044) not recognized by Roon, mostly ‘Various Artists’ compilations, so the metadata source is doing a great job.

I have the 3 volumes in separate CDs.
Vol. 2 and 3 get correctly identified, but vol.1 gets Alice Babs as well (I could correct it easily by going to identify and changing to Arne Domnérus). But just to leave the report that it also happens in the original CD (vol.1) and not just in the several volumes compilations/collections.

Just some little tune-ups as the product matures, I guess.

I spent a large part of my college years drinking beer and listening to jazz at the Pawnhouse (“Stampen”) and it was never an Alice Babs place. I mean, jeez…

Agreed. When i visited The old Town in Stocholm a few years ago, Stampen seemed to play the same sort of jazz like Montmartre in Copenhagen