Decided this morning was the morning for some of the man in black but to my surprise he seemed absent from Tidal. 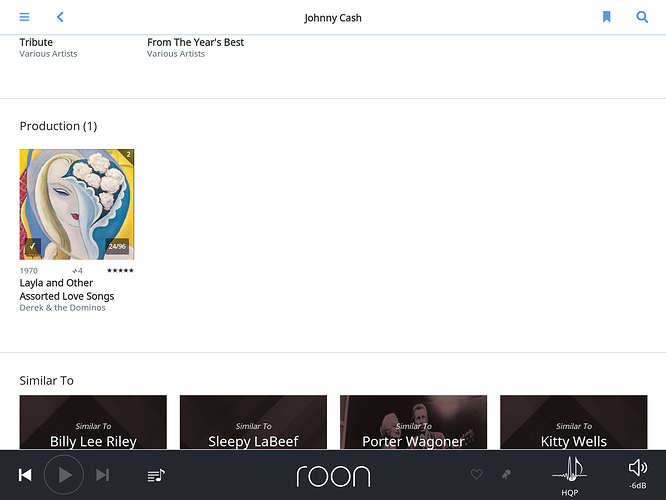 Did he really have production duties on Layla?

Checking Roon for other artists with long discographies that I have no albums of (Willie Nelson, Dolly Parton) their Tidal content was present. 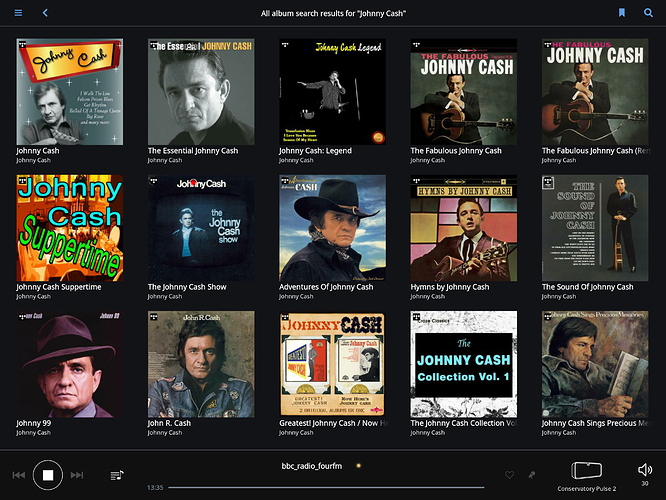 Just looked and took a screenshot. I’m in the UK

I’m seeing over 100 Johnny Cash titles on Tidal in the US.

Just ruled out it being a device issue, same on my PC as IPAD.

Not a TIDAL issue per se

A reboot brought no joy.

(even if it did add Nashville Skyline as a production credit) 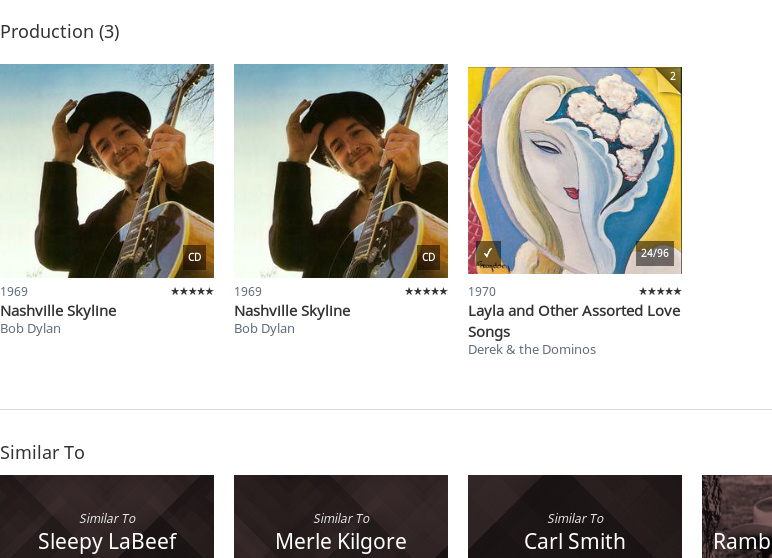 What country are you in ?

I’m in beautiful Ireland and have access to all his albums via the Tidal app.

We’ve just logged into Irish TIDAL account and Johnny Cash has ~150 main albums on our end. Why don’t you try to move your current Roon DB aside and start new one with only TIDAL content to verify that this is not a DB problem ?

I’m not sure exactly step-by-step what you’re suggesting here?

This is just temporary – you’ll be able to go back to your main Roon install soon, but if your issue is resolved this way, we know this is related to your installation, as opposed to something environmental.

Okay well on the new install I have access to Johnny Cash on TIDAL.

So this must be a database problem is there any way to solve this?

First, I want to clarify this statement:

Maybe local ones are under ‘Other Version’ button, because they have lower sample rate ? (assuming your TIDAL collection duplicates your local one)

As per the screenshot above I have no actual Johnny Cash albums but he appears on Layl and Nashville Skyline.

Now these don’t show up but the Tidal albums do. 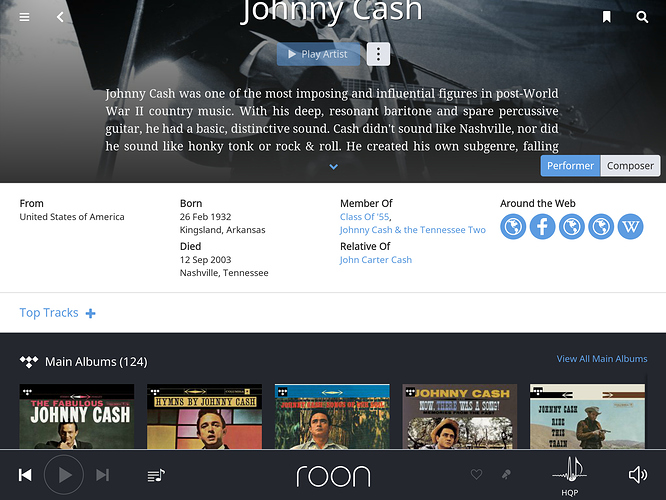 A search of artists shows up no Johnny Cash.

A general search shows up the Tidal version

Looking at Nashville skyline, there is Johnny Cash, when I click his name I get back to screenshot in my last post. 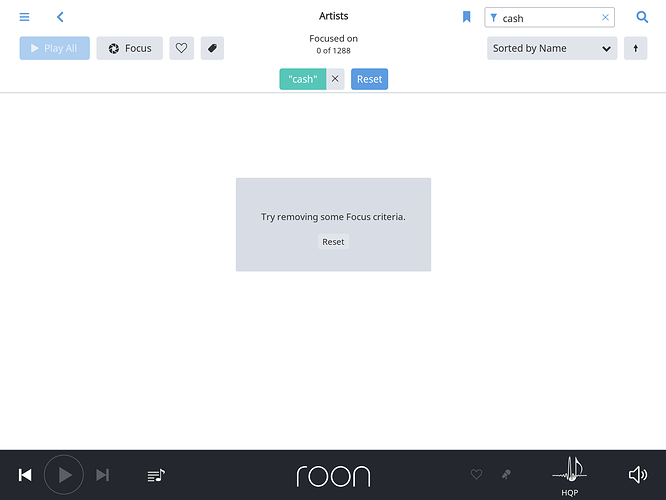 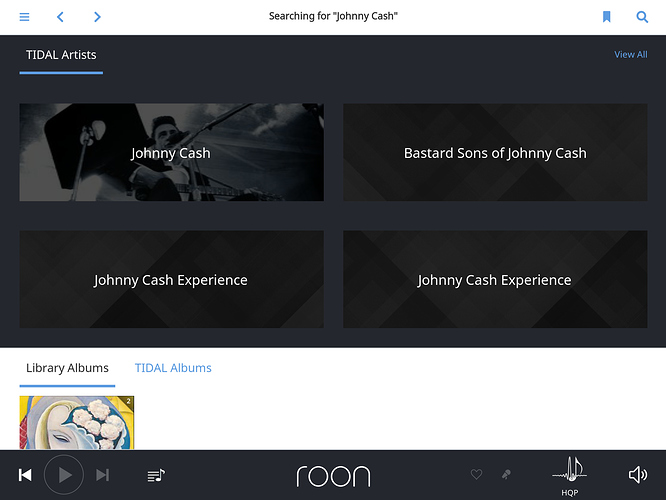 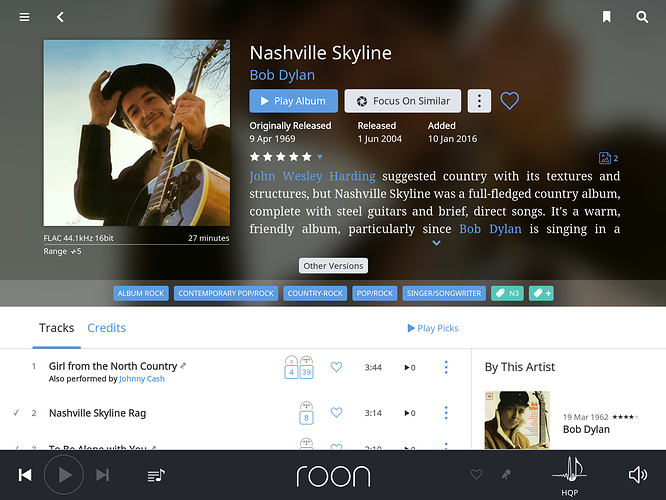 When I open Roon again after leaving it on the Cah page I get the following. 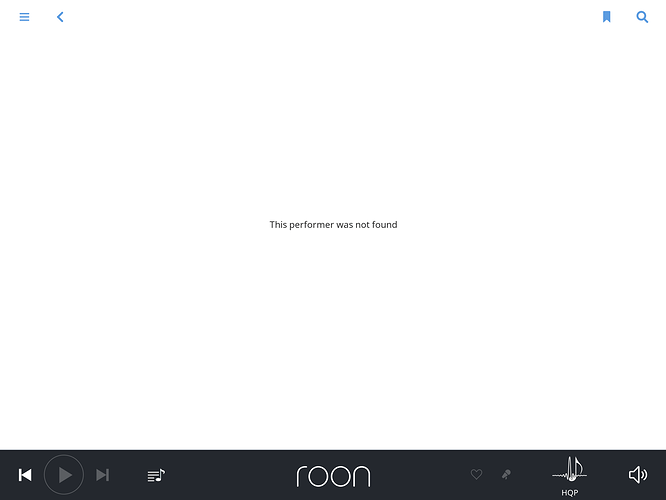 And the Highway men should be caught for Johnny Cash as well but aren"t, mind you they seem to be identified incorrectly anyway. 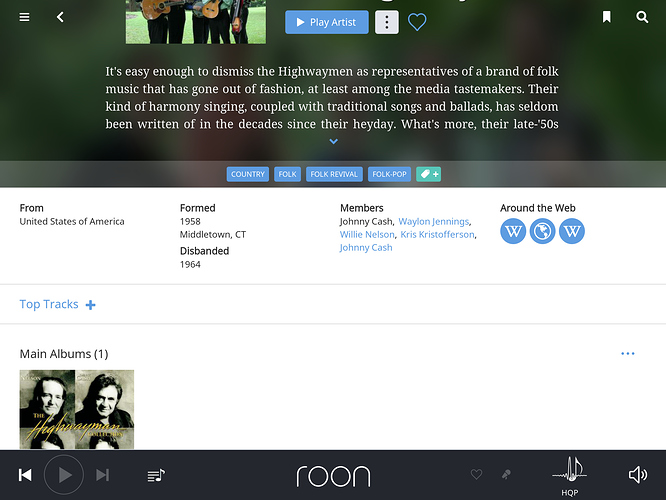 Ok, at this point we’d like to check your logs. I’ll contact you via PM with more details.

Speaking as a reformed Clapton worshipper, the production credit for Layla is a little questionable, regardless of what Roon might or might not indicate. I think it would only apply to the 2011 Deluxe Version of the album and only because the version of “Blues Power” that’s on there was performed on The Johnny Cash Show.

Edit: Sorry. There are some other tracks on Disc 2 of the 2011 Deluxe Version that were Johnny Cash Show performances. Cash, however, had nothing to with the original album, AFAIK, and likely had little or nothing to do with the production of those performances from his TV show.

Years ago, when the world was young and I was high all the time, I thought Clapton was god; now I just think he was a great rock guitarist. These days, you could probably convince me John Abercrombie is god.