Just a Crapshoot on NAS

Since moving my library to a NAS my Roon experience has been 70% pure frustration. From continual slow library scans to losing all ‘heart’ data and album meta changes being lost. It’s consumed hours and hours of my time over the last few weeks and made my partner hate having to use it.

More details about your CORE specs and Network connection to the NAS and internet please. Sounds like your Core is struggling with the NAS connection and access speeds - why not move the Library back to the Core machine…if it aint broke…

Thanks @wizardofoz. I would love to move it back but i moved it off as i’d maxed the external drive i had it on and it had seized up. I was going to build a nuc with appropriate storage in the new year. I hadn’t considered the connection speed to the NUC so maybe a larger external drive back connect via usb could be the answer for now.

The connection is core and the synology ds108 are both on the same netgear gs108 switch. Which is then connected to the netgear ax80 router.

DAS (Direct Attached Storage) is always going to be faster than NAS and with 10TB drives easily affordable these days a NAS for just music is really not the way to go. But great for a backup that is shared in the household. NUC will at least get you to place where your Mac doesn’t need to be on all the time you want music.

Now this issue of slowness while this old NAS it highly likely to be the major issue here let’s not rule out anything else perhaps.

What is your storage setup in Roon, using SMB etc?

Yes smb to the NAS. I have 3 folders on the NAS that are each set as storage locations in Roon. Not sure of what other data to give??

Hi @dylan, WHen i moved the library i setup each new folder as copies from the old ones and then updated them to their new location via Edit > Folder > Browse 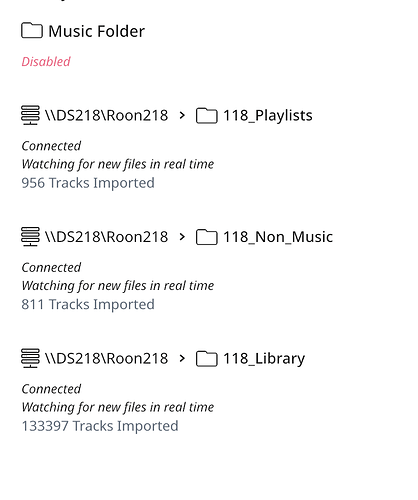 Hugo, this may not be related to your issue but I’ve found that MacOS has a nasty habit of loging me in as a guest - even though I have a valid login and the pw is saved in keychain.

Hey Graham, now you mention it, it has been defaulting to a test profile i setup. This could be the issue (though o can’t check until after work now). I didn’t think of it as the bookmarks were still there, i wonder if they’re not profile specific though.
Thanks

Maybe go thru you keychain and remove any incorrect login info for the nas. But roon doesn’t use the keychain for nas logins that I am aware of. This is not a mounted volume in macOS

So for the ‘heart’ data i’m an idiot. Roon had defaulted to a dummy testing profile so there were no ‘hearts’. I’ve now deleted that profile and yes all my metadata is still in the normal profile.

Now just leaves the slow library scanning (but i’ve set that to only scan every 24hrs. Hopefully it’s smart enough to only scan at 1am.

Roon may not directly, but SMB does!

I don’t have a directly analogous system - ROCK hardwired ti a 1Gb switch to a 2X1Gb into the (Qnap) - but scanning is brisk. If I go into settings and rescan the appropriate storage after adding, say, an album It comes up within a minute or two at most. And I have a lot of files!

Since moving my library to a NAS my Roon experience has been way more pain than fun. Literally lost hours and hours waiting for rescans and then fixing metadata changes i’d already made. Currently a library rescan takes up to 4 hours and it’s doing them daily. What are the guidelines for NAS connectivity?

10k albums isn’t what I would call a small library so this linked post might contain useful information:

I hate NAS’s for music storage. I know that some people like them/need them, and we do support them, but I wouldn’t use one for Roon (or any software trying to manage 50-100k+ music files) for myself, regardless of library size. They don’t support real-time watching for file changes very well, scanning them over the network takes 10-20x (or more) as long as a local disk. Because they don’t support filesystem watching very well, you pretty much have to scan the whole folder tree periodically to …

Btw.: Doesn’t this belong to Just a Crapshoot on NAS?

Do you know of any recommendations on when to use NAS vs DAS. Roon pushes you to NAS but it appears severely deficient (to the point of unusable) in certain situations. Would be nice to have a guide to assist.

A single drive nas is just a disk unless you have to use it for other things like file sharing etc. It is ALWAYS better to have media storage on the core machine, even if it’s via USB for Roon