KEF Egg or Muo, or other 'active bookshelf' type speakers

In my failing quest for a nice bedroom type system, I came across these two and wondered if anyone had comments on either?

The Jambox I’m currently using as a test isnt quite right, so I want something at least a little better, and since I have a ‘legacy’ (hate that term) Jambox, it makes noises when charging/low power etc which is far from ideal in a bedroom scenario if you fall asleep listening to music.

Of all the Airplay type devices I’ve seen the Muso’s are about the only ones that seem to fit the bill, but they’re a bit more than I want to spend for something I’ll use so little, and I’ll be paying for a whole Naim ecosystem I’m not going to use (been there) and end up being restricted to Airplay with Roon. Same for other all-in-ones - money is going on features that won’t really be used (although an alarm clock is useful) and also come with Airplay limitations as well as generally poor sound.

There were some other KEF actives and the Yamaha NS’s, but then we’re getting into slightly bigger and more expensive territory again.

When saw the Eggs I thought they might just do the trick and then I have the option of their internal DAC via the Pi’s USB, or the hifiberry DAC via 3.5mm jack. Anyone care to talk me into or out of it? What haven’t I considered properly?

Try the Elac Debut B6, really affordable and an amazing sound for that price.

Add eg a Raspberry Pi with an IQAudio hat (DAC+Amp) and you have an amazing combo.

I’m using the audio engine a2s with a Hifiberry DAC+. They sound great, much better than before with an airport express feeding them. I think the new A2+ have a built in DAC so you could get away with just a basic pi.

Follow-Up: the Audioengine A2+ from April 2015 (Vol.38 No.4): When Robert J. Reina reviewed the Audioengine A2 powered loudspeaker in the December 2007 issue, he concluded, "I have never been more impressed with or more stunned by a component I've...

I too am curious as to what speakers other forum members use for a bedroom/desktop setup. 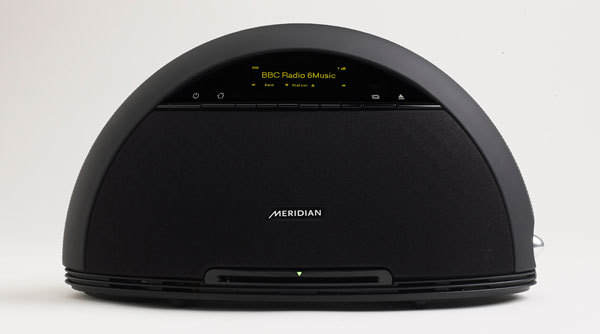 €2.600 when it first came out, but it still sounds like a million bucks. Fed by a Roon Bridged Cubox via S/PDIF.

Ouch! Slightly more expensive than my bedroom budget, but what is it?

These days you can pick one up second hand for a few hundred $/€/£.

Raspberry Pi with IQAudio DAC and active speakers is a nice combo.

I use Genelec’s G series with sucess. I like the SQ, quality build and looks. Really any active speaker will work but you get more “bang for your buck” looking into the pro market and studiomonitors vs your regular hifi shop.

Also have an old Squeezebox Boom in the kitchen. I was close to replace it but it got a second life with Roon.

All those suggestions look great (the Genelecs might be a bit ‘too pro’ looking) but sadly I’ve been vetoed on the Eggs and anything bigger/similar looking as being ‘too messy’ for on top of the bedroom chest of drawers.

Damn that Muso with its sleek looks and low profile… Guess I’m just going to have to try and find similar or save it until I can afford it and have emotionally detached from the money wasted on AirPlay. I might still try and sneak the Eggs or one of these lot into the kitchen.

I came across this brand in my continued quest, and this one might be getting me closer.
http://www.audiopro.com/products/addon-t9

I’ve been on the same hunt, broadly looking for something that is small, all-in-one (which excludes more traditional stereo bookshelfs), and sounds good. I was leaning towards either Naim Mu-So QB or Geneva Aerosphere Large (both received What Hi-Fi awards), but recently I’ve been leaning towards B&O’s Beoplay A6. All three are in the same price category, all three look good (but very different), and all three contain at least some built-in streaming (Naim and B&O have an extensive list, Geneva getting by with Spotify connect and local wireless standards). And none interconnect in any especially sophisticated way with a Roon (B&O has Google Cast support, so if/when Roon supports that, there will be an immediate solution).

I never really found anything all-in-one that I felt was
-Good value & in budget
-looked good
-sounded decent enough (Ie not crap but didn’t need to give the hifi a run for its money)
-had the connection options I wanted (wired Ethernet and RAAT)!

So I went for a pi2/hifiberry and Marshall Stanmore in the end, plus a ebay LPS on the pi to get rid of buzzing.

So all in all ,absolutely not what I set out ti get and has more hidden wires, power supplies, etc than I thought I’d tolerate. But it looks cool and works.

I’ve realised I could live with AirPlay in the bedroom, but I still feel it’s a bit of s restriction knowing you can’t group with the main hifi so since I was buying new I went for annRAAT solution. Ironically, I really need RAAT in the kitchen but the clutter of power supplies and wires is a no go there as I can easily hide them, so until Marshall include an Ethernet socket and RAAT I’ll keep looking.

It’s disappointing how few decent all-in-ones with good looks and connection options (non proprietary) are out there,mind even more so RAAT enabled (zero)…

In addition to my main system, I use the KEF EGG’s In my office/man cave with Roon on my 27" iMac connect via USB.

They take a little while to run in but after that they absolutely sing and produce a sound the belies their size. I love them!

I use the A2+ as a desktop setup and an Audoioengine d1 DAC as a headphone amp. The a2+ are nice for near field listening with surprising soundstage and dynamics but they don’t really fill a broader space. I’m considering the new active KEF LS50’s for a pair of stand mounts. Everybody seems to like the ELACs but then you’re buying a separate DAC/AMP combo or integrated amp. Audioengine has larger active bookshelf models, the A5+, HD3 and HD6 - would love to hear some Roon user impressions of those.

I think a plug and play active speaker would be perfect, you could just stream to it with your phone using bluetooth. Just set them up, hit play and you are done. I would look at Klipsch powered monitors (Amazon $350), the Dynaudio Xeo, and the Kef LS-50 powered versions among others.

you could just stream to it with your phone using bluetooth.

Not via Roon though…

what are the constraints there? can roon not push to bluetooth?

what are the constraints there? can roon not push to bluetooth?

Not if you’re on iOS at least, I’m not sure about Android. (Actually thats possibly not clear - if the core or another remote has bluetooth in range of the speaker maybe its possible)

Also, it wouldn’t be RAAT so you can’t group with other RAAT based zones - that may or may not be a problem.

I still wish there were a couple of amazing RoonReady speakers like a Sonos or something on the market. One day hopefully.