My NUC rock has been working fine since installation (6 months). Today, the NUC was not connecting as a ROON core and it showed the attached messages upon rebooting.

My NUC specs are:

I also have a samsung a Kingston SSD 960 attached to store music.

Greatly appreciated any advice given to solve the problem. 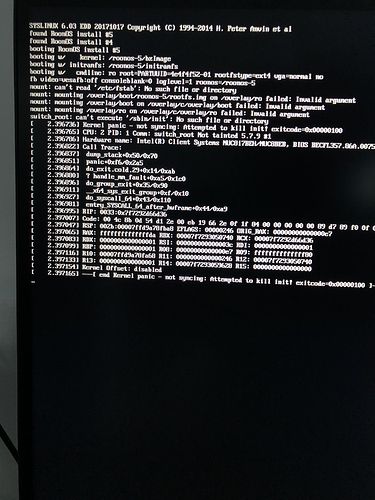 Hi @Walter_Del_Castillo. I’m not going to be able to offer a fix as it’s ROCK. I do know enough Linux to tell you that it’s a fundamental boot failure and the Roon OS image is damaged. Failure to find /etc/fstab means no filesystems, not good. It’s almost certainly data corruption and not hardware. I only replied as kernel panic caught my eye, the most alarming of the Linux error messages. Don’t panic and wait for help…

Thanks! Yes, i hope to get support on this. I may need to reset and re-install everything again? Unfortunately, I have not been able to find a guide online to do that.

So I stumbled on this Transcend 256GB SSD failed after only 9 months which looks familiar, you might want to read it.

There seems to be a bit of it about and you may have a similar issue.

My NUC rock has been working fine since installation (6 months). Today, the NUC was not connecting as a ROON core and it showed the attached messages upon rebooting.

Walter, I have moved your thread to the support area of the forum where it will be seen by Roon staff.

Your problem most likely is related to the issue some ROCK users have experienced after upgrading yesterday to build 220. Less than an hour ago, Roon released a new ROCK build (227) which resolves the issue.

What happened We released a new version of Roon OS (for ROCK and Nucleus), and while the majority of installs were fine, a small number were left not-booting. With Roon OS 1.0.221, our primary goal was to implement support for NUC10 devices with ROCK, which included the requirement of updating the Linux kernel. In recent months we’ve seen an increase in requests for this support, and @danny stated last month that this build was in more advanced testing outside our company’s lab: This Roon OS …