Can anyone lead me to a KB explaining how I can accomplish the second bullet of my use case? 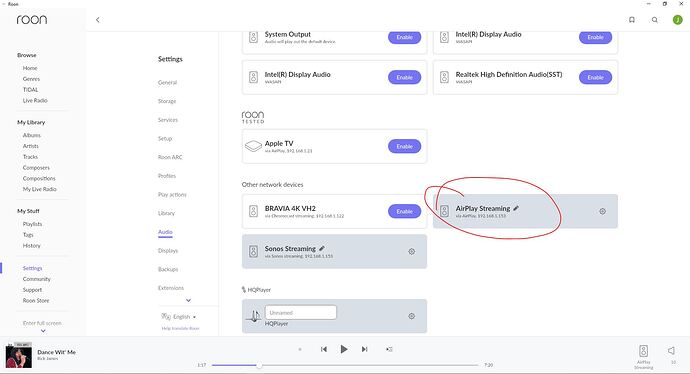 Get more information on the LG OLED55C14LB. Click for pictures, reviews, and tech specs for the LG C1 55 inch 4K Smart OLED TV

Exactly, @Martin_Webster. I have the LG C1 set up for AirPlay…it doesn’t show up in the Roon snip above. My Sony A80J TV (The Bravia Device) shows in Roon, via Chromecast and that was automatic; I don’t think I did anything.

Can’t get the LG to show up in Roon.

I have the LG C1 set up for AirPlay…

The TV only supports AirPlay2 according to the specification. Roon doesn’t support AirPlay2, only AirPlay[1].

I have a 2019 LG C-series TV and have the same issue, it’s compatible only with AirPlay 2 and does not appear as a Zone option in Roon. LG does not support AirPlay 1.

Can you confirm this with examples?

An AirPlay2 sender is compatible with Airplay[1], i.e., it can send to an older Airplay device or a device that has Airplay[1] support in its firmware. However, only Apple devices are Airplay2 senders. Roon can only send to AirPlay, and these TVs are AirPlay2 receivers.

Can you confirm this with examples?

An AirPlay2 sender is compatible with Airplay[1], i.e., it can send to an older Airplay device or a device that has Airplay[1] support in its firmware. However, only Apple devices are Airplay2 senders. Roon can only send to AirPlay, and these TVs are AirPlay2 receivers

Thank you for the discussion, Gentleman; huge help.

I have several Sonos endpoints which are Airplay 2 and Roon can stream to them over Airplay.

Are you sure about that? Yes, Roon supports Sonos, but it doesn’t use AirPlay2 to achieve this. As I mentioned before, only Apple devices can send over AirPlay2.

Here’s what my path looks, like (I think this is what you are asking @Bert for @Martin_Webster). Not sure how to distinguish between AP1 and AP2?

I do know when I use “Sonos Streaming” I get a higher quality, purple diamond-ie icon at the Sonos Arc endpoint, distinct from the green circular icon you see with AP. 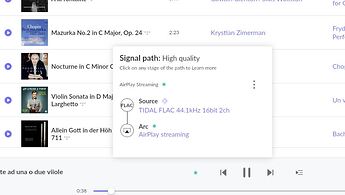 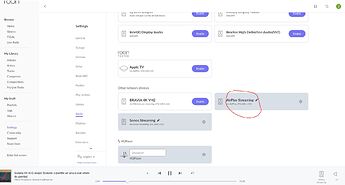 Roon uses a reverse-engineered solution for Airplay[1], which will resample the source, and is why you see the green, high-quality, badge. In contrast, native Roon Sonos support directly sends a bit-perfect signal to the Sonos endpoint.

Airplay2 streaming is only available on Apple devices, so I would guess that Sonos has to support both AirPlay[1] and Airplay2 on their devices, which is why @Bert is using an Airplay2 device with Roon. But I suspect the signal path will only show high-quality, as with Airplay[1].

Not sure you should get green with Sonos and Airplay if it’s 44.1/16 it would pass through lossless any other rates would be resample but Roon would show it in the signal path. Sonos streaming supports up to 44.1/24 without Roon having to resample. Does Roon just assume airplay as not lossless?

Not sure. I thought AirPlay converted 44.1 kHz to 48 kHz, and since this is outside Roon, it’s given a green badge.

Airplay to an Apple TV would but regular Airplay should be 44.1

It just deems Airplay as lossy when it necessarily isn’t as here is a native 44.1 and it’s still green.

So is the bottom line I can’t AirPlay to my LG C1?

If it doesn’t support legacy Airplay no it won’t as no devices other than iOS or Apple hardware support sending material via Airplay 2. Roon is cross platform and thus does not support Airplay 2 as it uses its own code to send via legacy Airplay and not the operating system.

If it doesn’t support legacy Airplay

I don’t know if it does or not. But yes that is what I am saying. There are lots of posts about the set and Airplay not working if you google

Just stumbled across this.

It looks like we always consider AirPlay to be “High Quality” as opposed to “Lossless”. Thinking back, I remember why. There are two reasons for this: Many popular AirPlay devices perform internal format conversions that we know to be destructive (example: all AppleTV models convert 44.1k->48k). Since AirPlay streams are clocked at the source, they must either have fancy adjustable clock hardware that can conform to the stream coming from Roon, or they must perform DSP to resolve the clock di…