Given what I’ve found in these threads it appears that there’s not a “list” view for navigation? Roon has a beautiful interface, but brutal for actually trying to navigate through - particularly in my case where I have multiple versions (masterings) of many cd’s, which I label accordingly in the album title. The graphic below shows the problem…for most the Allman Bros Fillmore East albums one can’t tell which version is which. Pointless in trying to find what you’re looking for. I’ve read about workarounds like putting songs into playlists and sorting that way, but when there are thousands of songs that’s hardly more effective.

It may be poor form to compare to other software, but Jriver excels with this (photo also attached). Much easier to navigate.

I can appreciate the aesthetics of Roon and what they’re trying to accomplish, but it does no good if it renders the ability to find what you acutally want to listen to useless. Not saying they should change anything as is, but an additional view option would be nice. As it is now, the software is largely unusable for me. 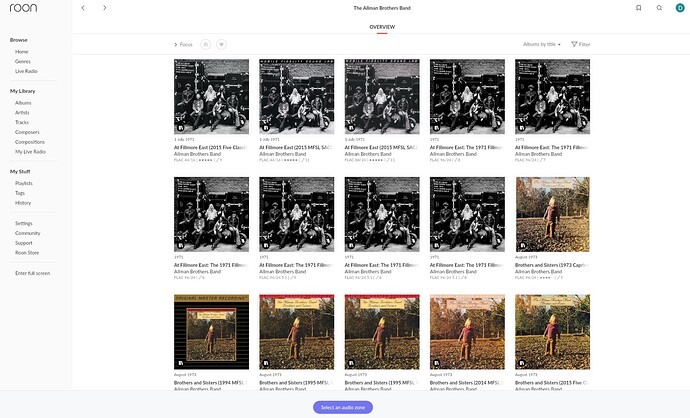 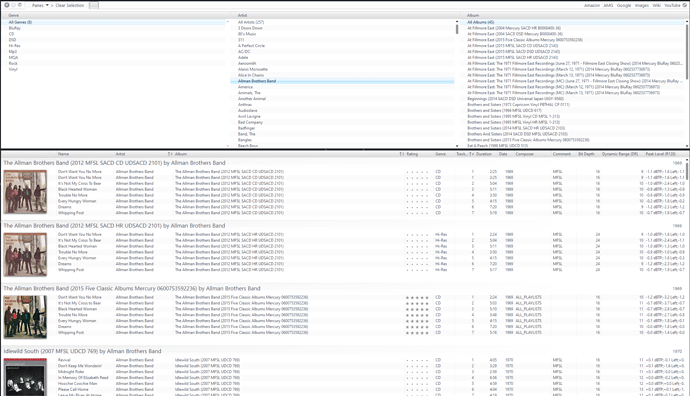 Doesn’t the versions tab give the information you’re looking for? 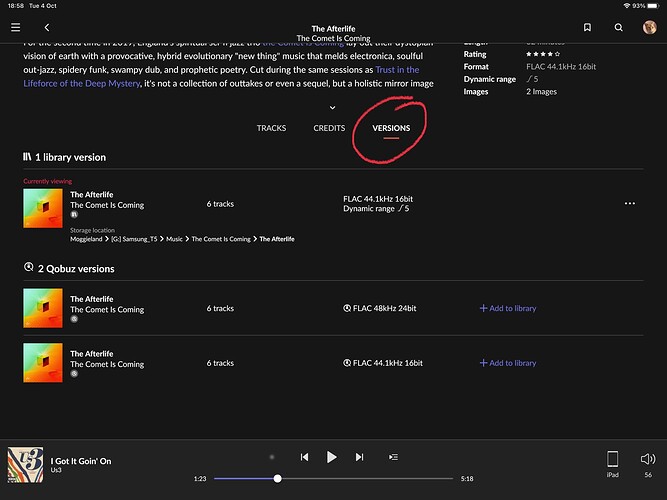 Ah - that’s certainly helpful and an excellent step in the right direction! Appreciate the tip.

A list-like view would still be beneficial for artists with large catalogs, like the Beatles or Rolling Stones. For example, to get to Sgt Peppers I have to scroll through 43 rows of album artwork icons of other albums. May be nit-picky, but it’s little time-wasters that add up to make song-surfing really cumbersome.

I think there’d be an easy adjustment…they essentially already have the logic there, but it’s for songs and not albums. Clicking on “View” from the artist page gives the option to view by Album or Recordings…if Recording is selected it’s exactly what I’d be looking for…just with album instead of song. I guess it boils down to there’s no way to adjust the large album artwork icon view, which for a large library is cumbersome (I don’t need to see large images of the covers). 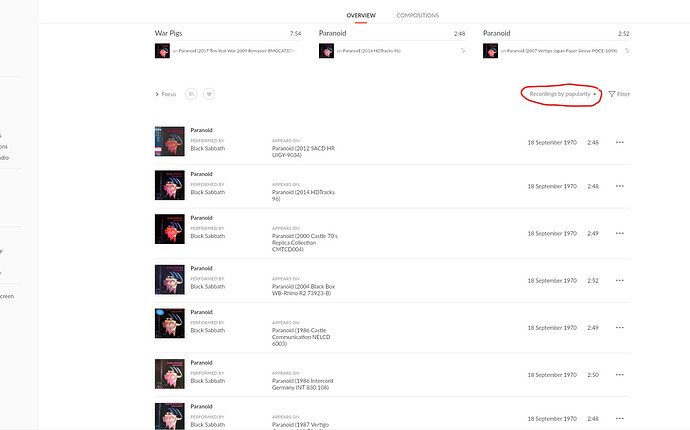 Producing a “simple list” likely be complicated by the heavy image usage throughout Roon, including the text which is also image based.

Roon has many times said they will never include a folder view.

Thanks, I wasn’t aware of that…good to know. And unfortunate.

If Roon considers these duplicates you can turn that view off. Then they will only show under version. If Roon does not consider them duplicates then I believe there is a way to tell Roon they are a different version of the same album.

FAQ: How does Roon handle multiple versions of the same album?

With my library, I have a LOT of duplicate albums and such. When I search in Roon, I see duplicates all the time. I’m sure there is a simple way to compress that to just show one instance. How do I do that?

Use the little filter funnel type Sgt then voila