Has anyone compared the Logitech/Squeezebox Transporter being used as a transport to the Microrendu?
I am feeding a digital signal to a separate DAC. Thanks!

Not even close . The microrendu is much better than either the Transporter or Squeezebox touch .

Old tech vs new tech . I had two Transporters at one point. The Auralic Aries is also way better than the Logitech devices .

Buying a Transporter purely as a digital transport might be a bit of waste but you can pick them up for around 500GBP now which makes them a great bargain given how many connectivity options they have. It is still in the reference class for its measured performance. Remarkable for a product that was launched around 10 years ago.

You would not use the TP as as transport to the MR. You would either use the TP as both transport and dac or you could use it as a transport only to feed another dac. If used in the latter fashion, it would be redundant with the MR which is also a digital transport (but has no dac).

I am a huge fan of the TP. I have had both Squeezeboxes and a TP (albeit a Modwright tube molded TP) for 9 years. Great products that were way ahead of their time. However, I agree with Jim that the MR is now a superior product. It is the cutting edge and the TP is getting out of date (no hi rez beyond 24/96, no dsd at all, no usb connection, etc). I am actually about to retire my TP in favor of a MR with a new dac.

That being said, if you do not care about hi-rez, the TP, especially the MW version, still sounds pretty great. And, i love the one box solution. On Audiogon, you should be able to get a TP for $500 or so and a MW TP for about twice that. The MW mod is a huge upgrade.

Yes, I know. Sorry if my post suggested otherwise.

I figured that was a typo.

Not even close . The microrendu is much better than either the Transporter or Squeezebox touch .

Old tech vs new tech . I had two Transporters at one point. The Auralic Aries is also way better than the Logitech devices . Please visit the product order page for the new UltraCap LPS-1.2. The world's first bank-switching, microprocessor-controller, ultracapacitor-based, ultra-low-noise external linear power supply has arrived! In development for more than a year, and...

The lift is SQ was one of the biggest I’ve ever heard. If you order, be aware you need a different plug for the SBT. Can as an example be found in the iFi power.

And the best part is that you the later can upgrade to the MicroRendu, using that power

What cable did you get to connect the LPS-1 to the SBT?

As said, I used the connector found in the iFi PS. I suppose you can find something cheap on eBay or Amazon.

Maybe this one is OK? I like this from DX. Find the cool gadgets at a incredibly low price with worldwide free shipping here.

So does the Uptone LPS-1 work better with the SBT than the Sbooster BOTW LPS designed for the SBT? I have the microrendu + LPS-1 combo serving as a Roon endpoint in my main 2-channel/HT station… The Microrendu feeds into a Schiit Yggdrasil and the result in sq is quite glorious…

I also have the SBT serving as another roon endpoint in a different desktop listening station in my home office, and I notice that the signal is not as energetic or robust as the one coming out of the microrendu, although because the signal of the SBT feeds into an Audiogd Reference 5.32 DAC and an Audiogd NFB1 amp, it is easy for me to increase the signal’s loudness by turning up the volume Dial on the NFB1 amp. Sheer loudness alone does not really pose a problem, as a result… However, I have been wondering whether adding an LPS (either the Uptone LPS-1 or the Sbooster) can give the SBT some kind of lift in SQ refinement… So far, I have been powering the SBT with the default logitech power supply unit that originally came with it.

Any helpful suggestions would be highly appreciated.

Buy a powercable from here:
http://www.ghentaudio.com/part/dc02.html

…and test for yourself

Thanks for the links to the cables. I have been looking for something like that to connect my LPS-1 to the Microrendu for some time now. And I shall indeed “bite” and get another LPS-1 if it will bring significant enhancement and refinement to the sound of the SBT as it stands now.

Well, Squeezebox powered by the Uptone LPS-1, via an Oyaide/Belden star-quad DC cable, is a completely transformed monster which has far exceeded my expectations, in all areas: More refinement, more dynamics, better instrument separation, deeper bass, more “air” more (microscopic) detail, more impact, more energy, and–marvel of marvels-- perfectly smooth, relaxed, non-etched on my Audiogd R2-R DAC, and non-fatiguing: I do not have enough expertise to explain the “voodoo” in the LPS-1 that has brought these dramatic enhancements to the Squeezebox Touch. Suffice it to say that I have now got another LPS-1 on my “to buy” list, because this one is not going back to the microrendu, which has thankfully now gone back to Jesus for a hardware upgrade.

Many Thanks to R1200CL for encouraging me to try the SBT with the LPS-1… What a revelation!.. Simply unbelievable!

I seem to be a little late joining the topic, but while we’re all here:
I have a Transporter (Tent clock and power supply upgrade) gathering dust because the LMS native on my Synology NAS is a downright killing proposition when the library exceeds some 5.000 albums. It simply stops performing. Changing folders will take up to 15-20 minutes, if it doesn’t crash.
What I liked best about the Transporter is the IIS - i2s connection (cad5 network). My Lumin T1 replacement does not offer that option. It has HDMI out, but not IIS. My Gustard X20 offers HDMI / IIS in, but not much else. Now they are connected through BNC. Not my favorite.
Now if I can configure the Transport as an IIS endpoint to Roon, that would be something I’d give a whirl.
Any experience with that?

Not sure if I understand what you are trying to do, but in Roon under Settings/Setup you can switch on “Enable Squeezebox Support” and then the Transporter is recognized as a Roon end-point.
When you do that, you have to stop using LMS and Roon takes over. Roon and the Transporter work like a charm. Then you can connect the Transporter to whatever device you want to.

curious what you mean as well, and i also don’t understand the i2S reference (i know what it means, just not sure how it’s applicable to the transporter.

btw, i have two transporters, and use them both with roon- they work very well.

Glad to hear it works well. I took leave from my Transporter before joining Roon so I havent really tried this combo yet.
I like to have I2S as a protocol. When I had my Transporter hooked up to a Synology Nas using a Cad5 network connection that is exactly what I had. There was (at the time) no other possible combination without some serious trade-offs. I had to resort to Windows7 / Jriver to get a working combination. Not the best results there. So by-and-by I upgraded to Roon Lumin / Gustard. And still there’s some harsh edges to the reproduction I don’t remeber having before.
Now if I can get this Roon / Transporter combination to work on Cad5 (which is IIS / I2S protocol) I can do a proper 1-on1 comparison and see where my sonic memory is playing tricks with me.
Maybe I find out my current combination beats the old one by a mile. So much the better…
btw: I’m not running LMS at present as it serves no purpose. It is what ultimately did not work due to the size of my library, so I killed it.

ok, so I switched on the SB support and hookep up the Transporter to the network cable like the Lumin was. No auto-detect.
This is what I get on the setup screen: 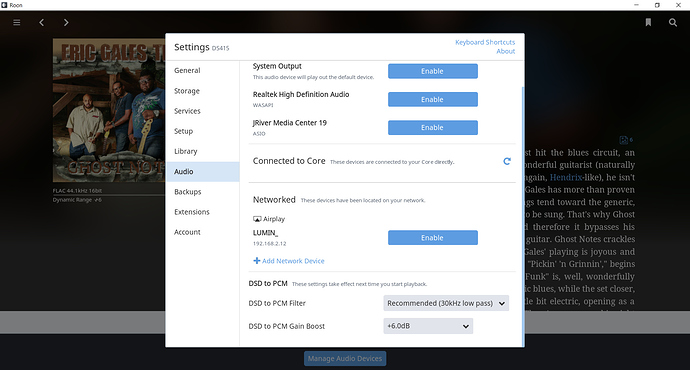