Lost tracks in playlist after moving to Nucleus

Connected to network via Ethernet

I just migrated my Core from a 2011 Mac Mini to a NucleusPlus. Control is via either an iPad or the old Mac Mini.

I followed the migration instructions and created a full backup via USB to an external hard drive. I then opened the NucleusPlus and restored from the backup.

Everything has transferred over well overall. The one exception is that I have a few playlists that no longer have all the tracks they started with. In particular, I had one that contained about 100 tracks that I use to test system changes. It is down to only three tracks. They appear to be the three that were added most recently. Not sure where the others have gone.

What should my next step be?

When you migrated, did the location of your media also change? Where is your library stored?

Can you share a screenshot of Settings > Library > Clean Up Library?

The library is now stored on an internal SSD drive in the Nucleus. It used to be on a Thunderbolt drive attached to the Mac. 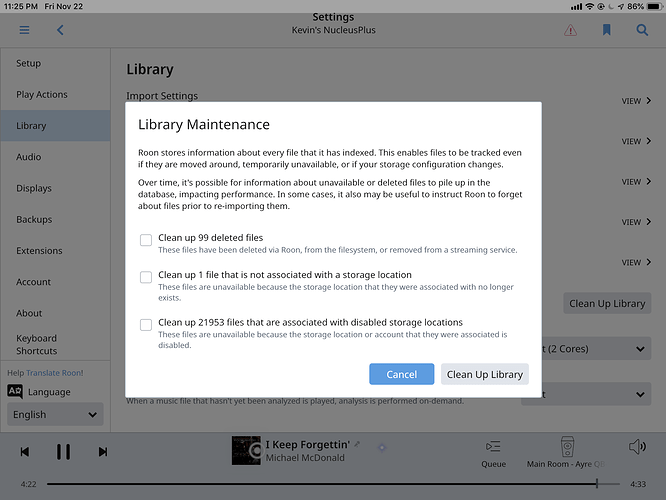 Thanks for confirming. It sounds like Roon might have seen two copies of your drive at the same time.
Can you please share a screenshot of your current Settings -> Storage tab?
Also, I’m noticing a yellow warning in the top right of Roon, can you open that up and post a screen shot?

Here are the screenshots 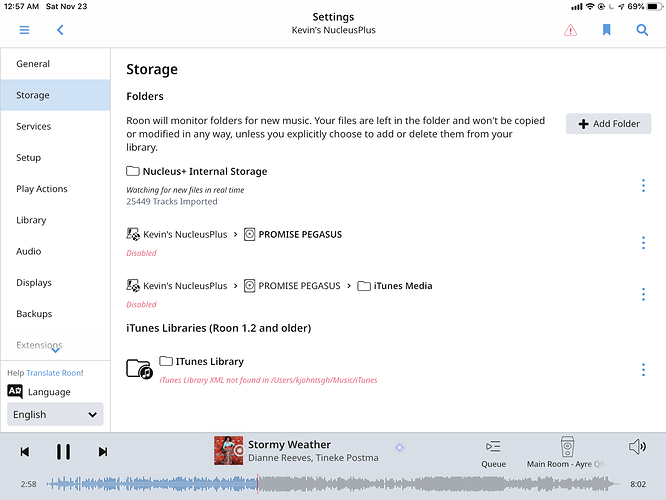 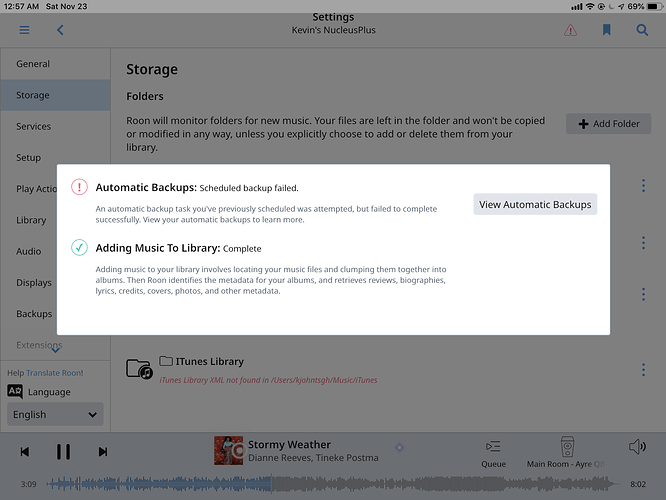 Thank you for sharing those screenshots!

Based on this information, it looks like the playlists might have been iTunes playlists, can you please confirm this? Do you still have the original .XML which contains all the playlist information?

Your .XML will need to be in the same root-folder location as the music files to be imported properly, please see our iTunes Playlist Documentation and general iTunes Setup Information. 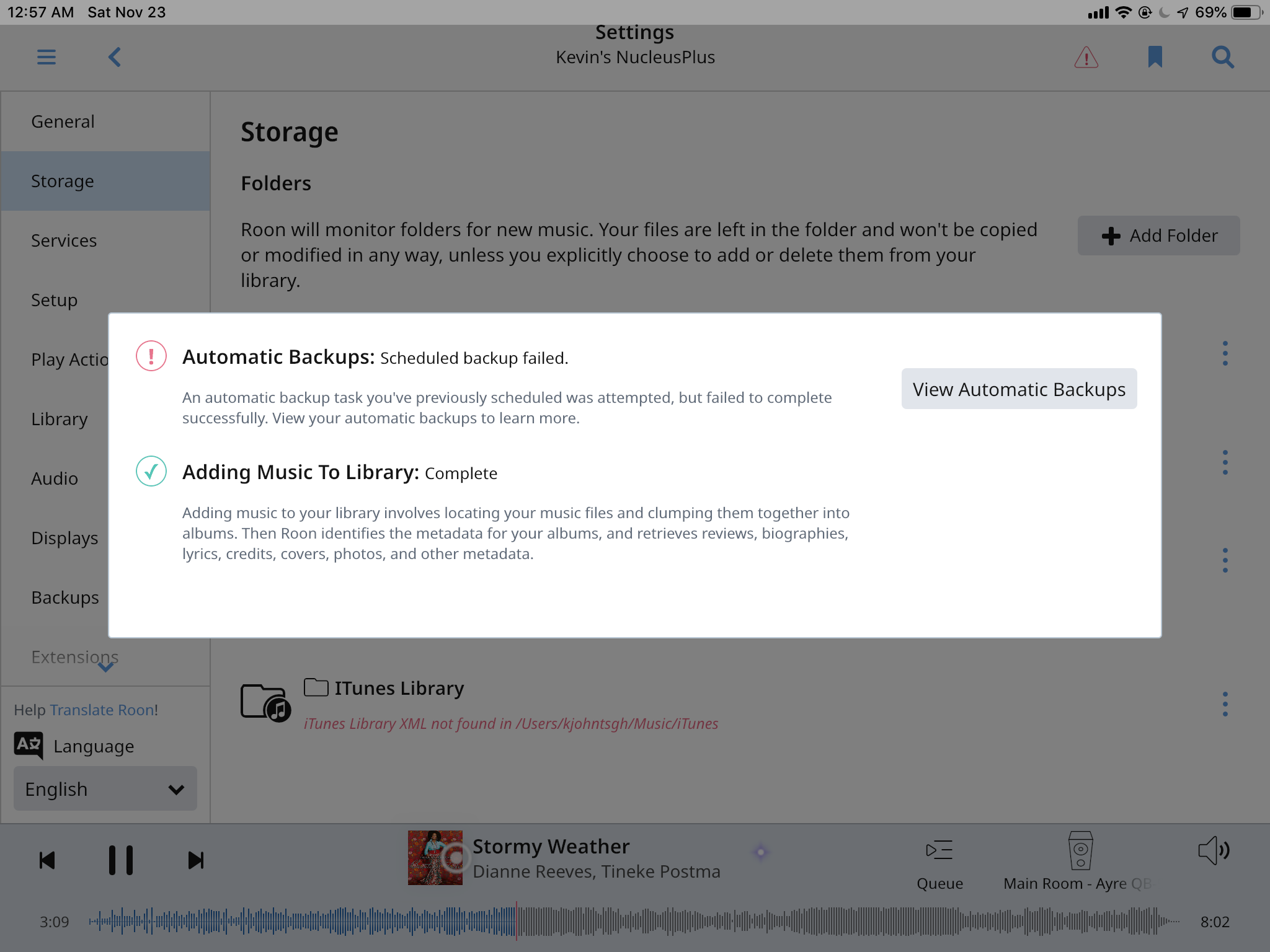 Also, it looks like your backups are not being properly created. Where do you intend to store your backups? I would suggest storing the backups not on the Nucleus InternalStorage, if you have a USB drive you can attach to the Nucleus this would be the simplest way to set the backups up, or you can store them on your Mac Mini if you share your Mac Mini folders via the network.

I’ve copied the XML file over to the iTunes folder on the Nucleus’s internal storage. See attached screenshots. Roon still hasn’t refreshed that playlist. What should my next step be? 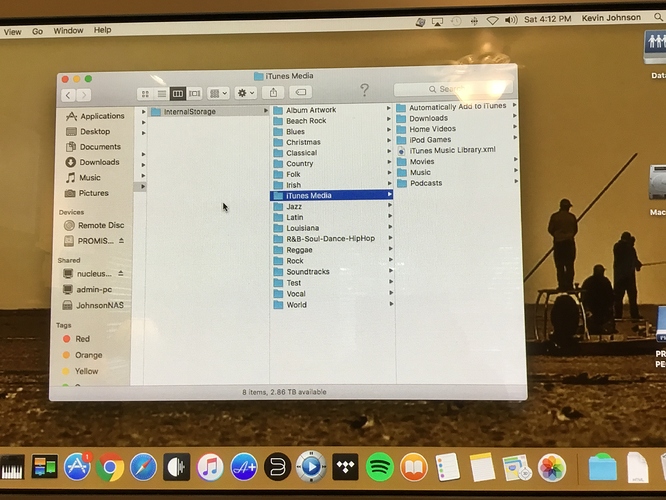 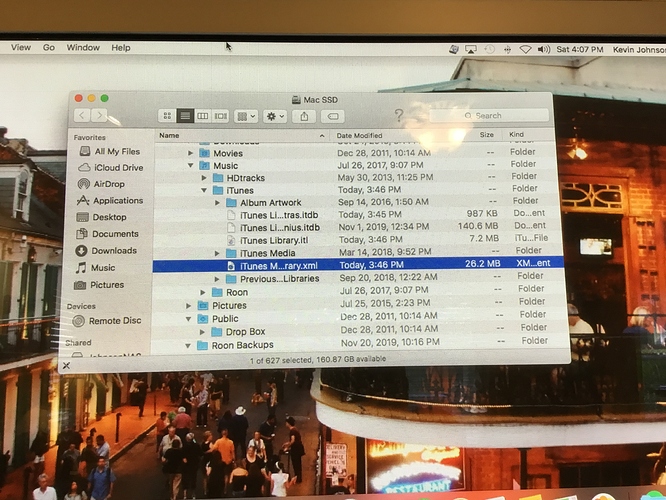 As for backups, I’m about to replace the old Mac with a new one as soon as I resolve this playlist issue. I am waiting to set up the backup to the Mac then.

Did you enable iTunes playlist support for that watched location? 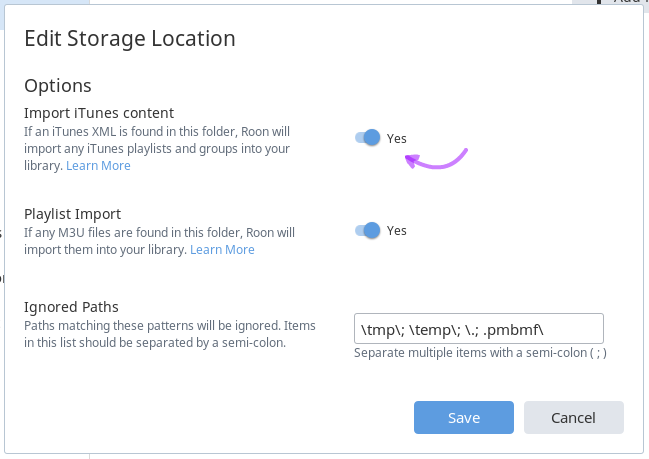 How is the .XML locating these files, are you using Absolute Path or Relative Path? If you’re not sure, please send me the XML via Dropbox/Google Drive and I’ll take a look. 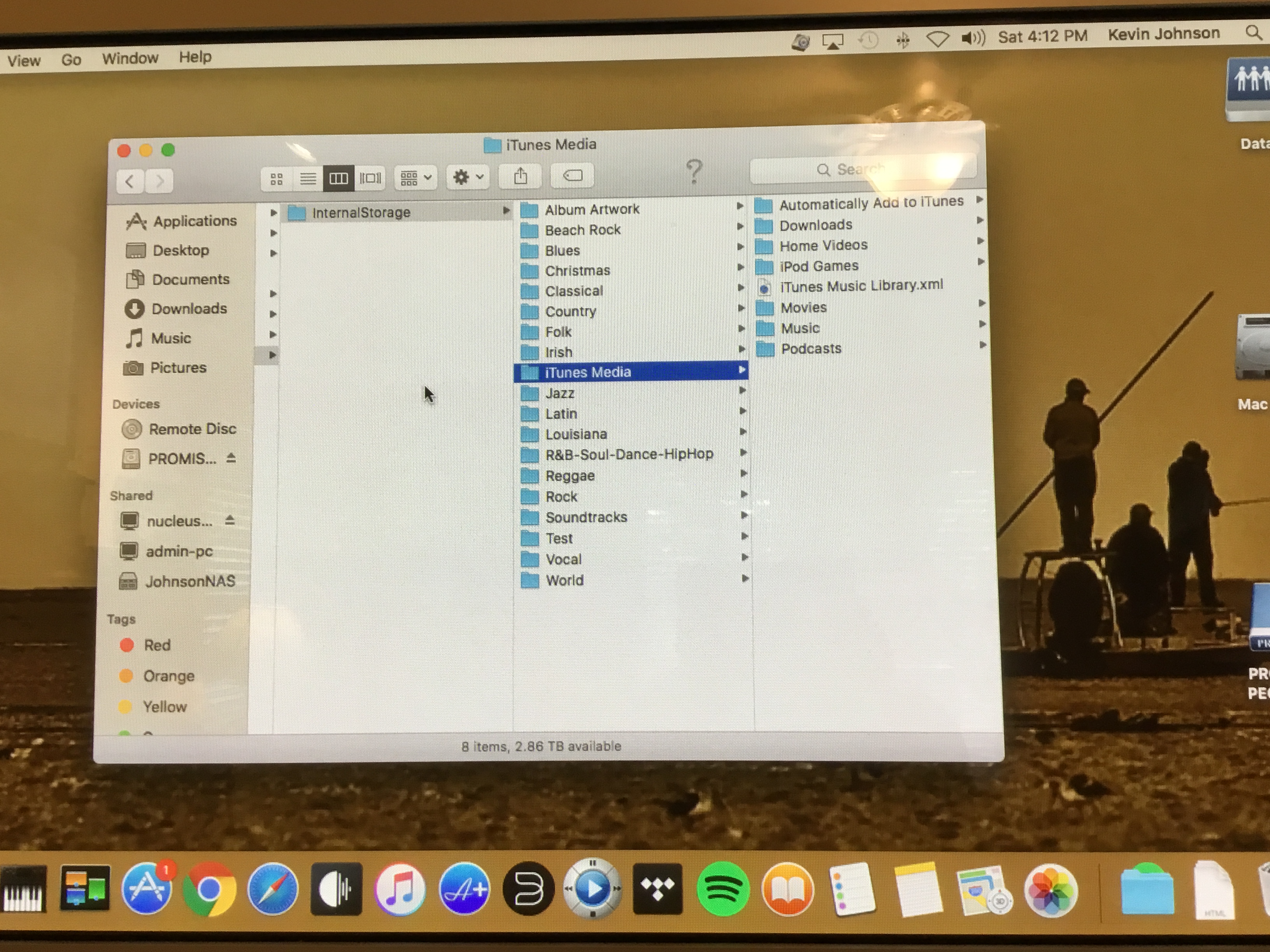 Just to confirm - does the Nucleus music folder have the exact same hierarchy as the Core it was on before?

I do have Import iTunes Playlists enabled.

The iTunes xml was located within a directory on the Mac itself. See below: 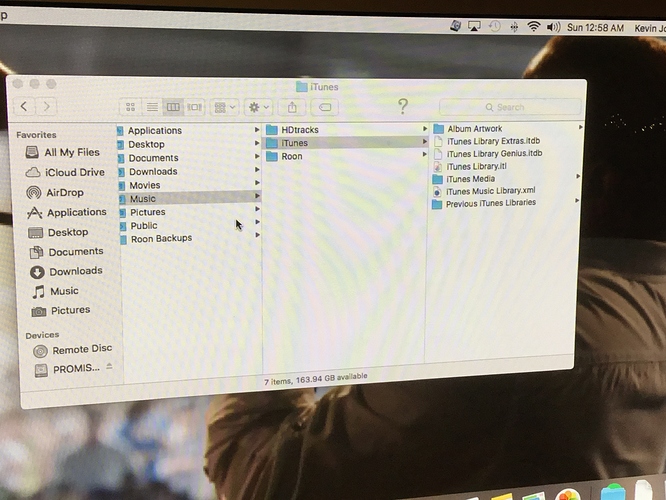 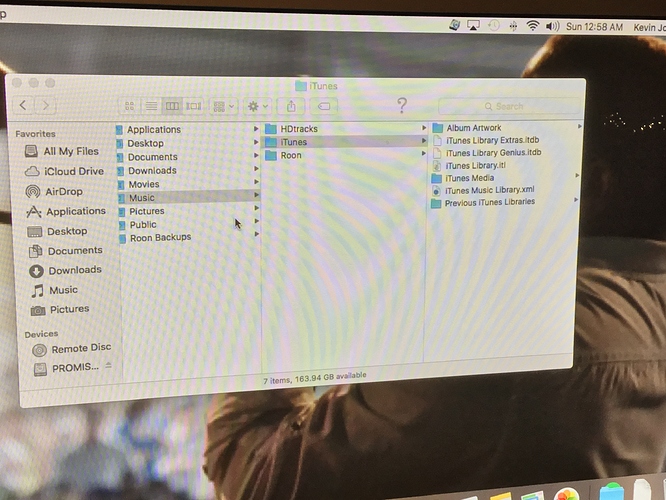 The music was stored on an attached Promise Pegasus device. Here is what the old storage directory looks like: 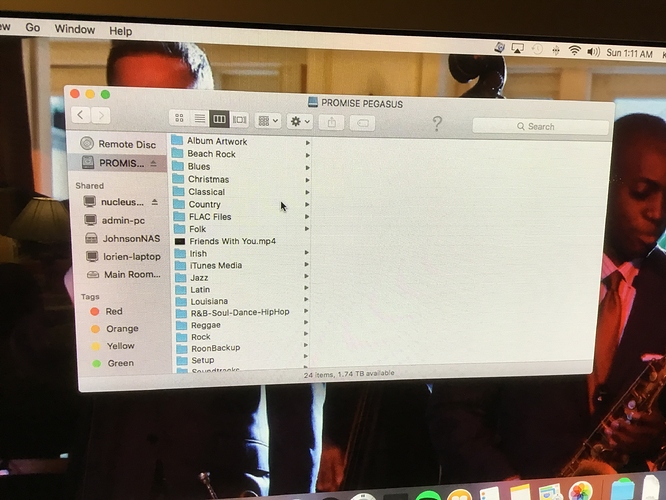 I’ve moved the music subfolders to Internal Storage on the Nucleus. Here is what the new storage directory looks like: 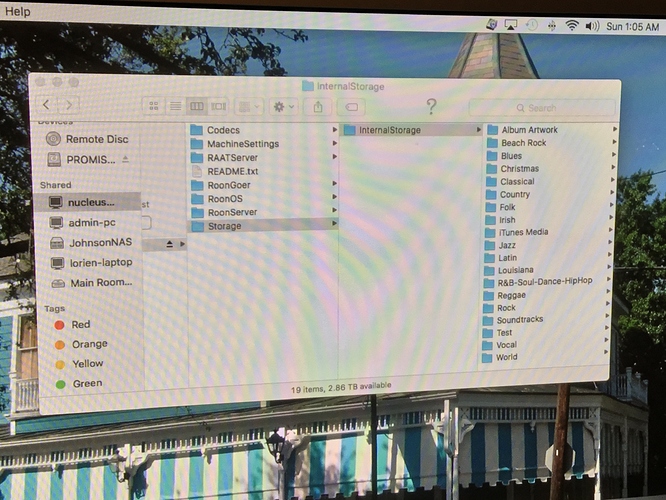 At this point, if the old playlists that are problematic were based on iTunes, is it easier just to rebuild without reference to iTunes?

Ok, they appear to have showed up overnight. Everything looks right now. Thanks for the help.

Thanks for the update, glad to hear the playlists showed up!