With Roon’s streaming technology built-in, both models have been certified by Roon Labs to provide the highest level of quality and performance in network streaming.

That link just goes to a general info page not a press release specifically about Roon Ready. Hopefully someone from KEF can confirm this Facebook announcement but it looks as if people like me who have been waiting for 100% assurance that certification is in place can now buy with confidence wrt the certification status.

And the release notes says it is Roon certified.

But Roon still says not certified 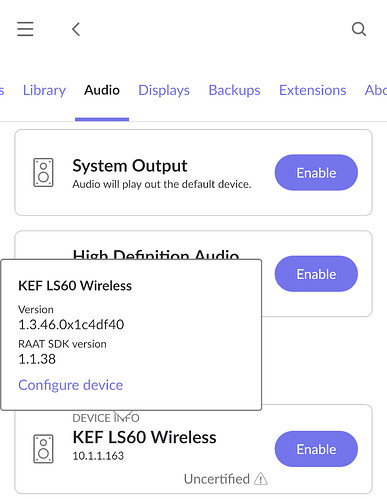 You may need to reboot your Roon Core for the changes to take effect on Roon’s side.

Well mine still says not certified. I am up to date. I have rebooted. Uncertified.

Did that work Aiden…the reboot? It didn’t with me and I am now at a loss as Kef are not really talking other than saying reboot…which doesn’t work. The only other thing I can think of doing is uninstalling Kef Connect and reinstalling. It would be interesting to know if people have had success.

Apologies, but I’ve been reaching out to my colleague in Hong Kong, and due to time differences, his late evening is coinciding with my morning. As rebooting hasn’t worked (and it hasn’t worked on the products I have here in the office, now that I’ve made my way in), we believe that Roon hasn’t yet ‘flipped the switch’ on their end. They have been contacted. Once they do so, you may need to reboot the Core still.

Ah! Well I have wasted a part of my day. But I am grateful you have updated this Ben

Think it would. Last update was today,3/10, and it says various bug updates and Roon Ready.

KEF Connect is the app, updating that will not affect the speaker firmware. The firmware in Settings → Speaker Update should read 1.3 for LSXII and LS60W, 2.6 for LS50WII.

Understood. Clearly you have solved it though Ben,It’s not been activated at the Roon end.

See the 3-10 update and V1.3. Hope Roon does its part soon- doesn’t show either speaker in its RoonReady devices list.

RoonLabs partners section now shows SLX ii as Roon Ready and Tested. Roon itself still does not recognize the speakers. Whoever is in charge in Roon, please advise.

Same result for me. Updated firmware to 1.3, rebooted Roon core and power cycled the speakers. They still show as uncertified.

Yes still the same this morning,uncertified. We shouldn’t really have an announcement of certification if the real update is no update. And I don’t particularly want to reboot my nucleus several times a day in the hope it now works.

Purely for the information of those that have these speakers . I spoke to my retailer who have managed to get response from Kef. It seems that Kef are totally happy that they have done their bit. In other words It is with Roon that the problem lies,awaiting them to update. Can’t say I am impressed at receiving an email this morning from Kef proudly announcing Roon certification,when they clearly did not actually test a set of speakers. But,as said,the problem lies with Roon who don’t appear to have addressed their side of the certification handshake.

Maybe @support can give us a heads up here after Roon activated support.

Can’t say I am impressed at receiving an email this morning from Kef proudly announcing Roon certification,when they clearly did not actually test a set of speakers.

My thought as well. As the person who started this thread by excitedly posting about the KEF announcement that appeared in my, and hance I assume many others, Facebook news feed I find it very disappointing that KEF would embark on a notification campaign to announce Roon Certification seemingly without anyone having even bothered to check in the Roon Core that I assume is somewhere in KEF’s development labs to confirm that the newly certified speakers were now being reported as certified by the Roon software. Yes, maybe it is an issue at Roon’s end but KEF’s failure to notice an issue that users here spotted within minutes of my original post isn’t a good look for KEF.

In my defence for relaying what now seems to have been a premature announcement at least it seems to have thrown a harsh spotlight on the issue and hopefully it will be resolved soon.

I don’t think you need to defend yourself at all. I don’t think it’s unreasonable to believe what has been presented to us with a degree of fanfare. Kef didn’t test this. On the morning of the update I contacted my retailer,who contacted Kef. I. Actually suggested that the uncertified state was because Roon hadn’t caught up. Kef replied to my retailer that I needed the latest firmware versions,reboot,and if it didn’t work put a ticket in. I wasted some little time taking steps to reassure myself.that it wasn’t my set up but the fault of Kef/Roon and that the announcement had been premature. I also find it annoying that there has been no real update as to when we can actually expect what we were told we had.