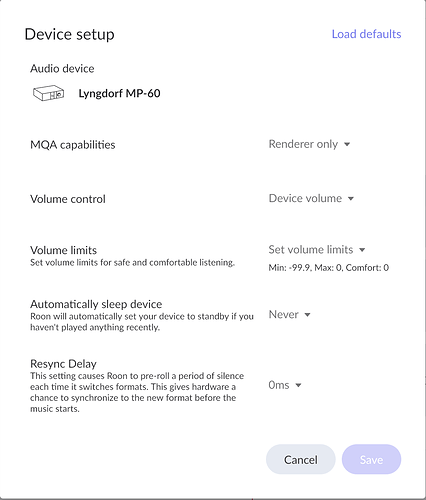 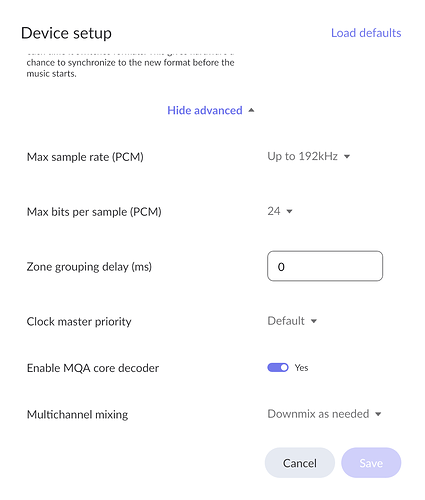 The signal path is as follows: 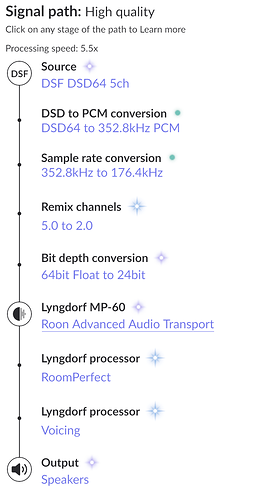 For some reason, there is no ability to select multichannel outputs on the Device Manager setup and the signal path shows down conversion from 5.1 to 2.0.

Any help would be greatly appreciated.
Thanks in advance.

The same reason as for the MP-50 (not supported by Lyngdorf). Choose another connection, like HDMI for example, that supports multichannel audio – but as it is a surround sound processor, don’t expected it to accept DSD from a source that’s not a properly licensed SACD/DVD/BD-player (AFAIK you’re stuck with PCM playback but Roon is able to do the conversion for you). Further reads:

[image] The Media Player of this product seems to be limited to 2-channel stereo playback according to the published Lyngdorf MP-50 whitepaper. Even DLNA playback is limited to stereo (MP-50 fact sheet). Media player: Internet radio, Airplay, Spotify Connect, DLNA Support (Stereo) Looks like you need to use another link (like for example HDMI) that supports multi-channel audio. Update: As of the papers linked above, I’m not even sure it accepts simple PCM audio multi-channel streams…

Thanks, BlackJack.
However, all of these problems with multichannel from my server (Wolf Audio Alpha 3 SX) have been over HDMI. I am aware that there is a PCM conversion but it is working only with 2 channel. The Lyngdorf MP-60 Roon Ready Device Setup does not allow for a 5.1 or 7.1 option. The USB connection is only 2 channel PCM but one is supposed to be able to play multichannel PCM over HDMI through the MP-60: multichannel works fine from the Sony SACD player.
Thoughts?

As by your writing and the screenshot from your OP, you’re using the Roon Ready network connection to your MP-60 and not HDMI. As can be seen above, only stereo (2-channel) playback is supported by Lyngdorf for their media player input (which includes Roon Ready).

Another user confirmed in the thread linked above that multi-channel playback is working when HDMI is used instead:

The MP-50 does support multichannel PCM audio over HDMI. I use an Intel NUC running Roon Bridge on Ubuntu as my player. Works fine. Multichannel audio input clearly shown on the MP-50 Web interface.

Much thanks, that was my misunderstanding.
That fixed the problem.
Thanks again!