This is really getting aggravating (to me).

I’m listening to Ute Lemper’s BERLIN CABARET SONGS, English translations of songs from 20’s and 30’s Berlin. The Roon notes on the album concludes with “Jeremy Lawrence’s English lyrics, based on translations by Alan Lareau, Kathleen L. Komar, and Haas, are amazingly deft, retaining the German flavor but singing well in their adoptive language.” It would be great to be able to look at those lyrics, but no. No lyrics.

The lyrics come from a company called lyricfind.com. Roon doesn’t create them. If there isn’t a lyric lyricfind hasn’t created one for the song and/or may not have the rights for them which have to be obtained separately from music publishers (not the music labels who put them on album or cd covers). Having run a company called gracenote for a decade who was the first to obtain rights to be able to display lyrics digitally, I know this space pretty well and it’s frustratingly complex.

Thanks for the insight on this. It sounds deceptively complex.

One final note. Since roon gets the majority of its meta data, album reviews and artists bios from AMG (all music guide, which is a part of tivo which used to be Rovi), you often have a situation where the data from AMG and lyricfind is matched together by roon and you have albums that have AMG data but not lyrics. That’s what you’re seeing. There may even be cases where lyricfind has a lyric but there is no AMG data, but thats probably not a too likely case and I would guess Room then may not make that lyric available…

Thanks, Craig. From my point of view, the lyrics come from Roon. And if they don’t have them, that’s a fail. They need to do a better job at having them. I guess I don’t really care if they’ve assigned themselves a frustratingly complex job.

Bill. No offense but that would be like saying if tidal doesn’t have an album you want to listen to it’s Roon’s fail and they need to fix it.

There is basically one company that does digital lyrics (LyricFind) and they are tiny, make very little money and have a very complex job. If Roon were to be responsible for “fixing” lyrics coverage issues, they would have to dedicate a whole team to it and it would be hard to move the dial much and they would lose money. Lots of it. It would be tremendously de-focusing and take away from them working on other important things that they are highly qualified to do.

I know his from firsthand experience with my previous company Gracenote as I was the first to build a lyrics business. I had 100 employees working on it (a bunch in India transcribing lyrics from the music because the lyrics hadn’t been digitally captured anywhere before). It would have only been profitable if apple embedded lyrics in downloads (this was before steaming took over) and as a matter of fact had a deal with Steve at Apple to do this but although we had 200 deals signed with major publishers, small publishers and bands (if you want lyrics rights from the eagles and other major bands you have to get them directly) but we still didn’t t have enough coverage due to a major publisher that refused to sign. And this only was for North America. In the end Apple and I gave up and I sold the business to LyricFind.

No offense but that would be like saying if tidal doesn’t have an album you want to listen to it’s Roon’s fail and they need to fix it.

Not quite. Tidal is an extra add-on, and explicitly distinct. Though, I have to admit, I’d probably at least feel that way

Sure I can. As a customer, I want them to provide the best possible interface for listening to music, and right now this is a frustrating lapse. Oh, and I want the price to keep going down, year over year, too.

Really, the whole vaunted web of information in the Roon UI feels kind of cobbled together, to me. I mean, it’s better than nothing, and does lend a certain je ne sais quoi to the UI, but I can’t spend more than couple of minutes linking around reading without cognitive dissonance. I was reading the Brenda Lee bio in Roon the other day, and immediately wanted to know more about Owen Bradley, who produced both her and Patsy Cline (not to mention Loretta Lynn and k. d. lang). But is there a link? No. I had to pop out to Wikipedia. (This despite the fact that you can search on Owen Bradley in Roon and get a bio page on him, a fact I was unaware of till just now when I thought to try it.) I should probably just ignore it.

Also checkout this three-year-long thread. Notice how mike says (in Feb 2016), “This will likely come a little later in the year with our next major release, which will be focused on metadata and editing.” Notice how nothing ever happened on this. At least, nothing that’s noted in the thread.

This thread reveals a constant challenge the tech industry has. You can either go forward with features knowing that sometimes they’ll be of value to customers, and sometimes they’ll fail due to hw, infrastructure limitations, etc., or you can hold those features back until some unknown time in the future when the earlier barrier can be dealt with.

Enormous companies like Amazon and Apple can sometimes throw money at these kinds of problems, which can create expectations in the consumer audience that any problem should be solvable at low cost and high reliability.

Having worked at two of the largest tech companies, I can say that in a fully informed world, consumers would make considered choices between getting imperfect features, or waiting years (or more) for much more complete ones. Not an easy choice for the product provider to make for a diverse customer base.

Regarding Mike’s quote, this is another dichotomy in the tech industry. Some companies are incredibly tight-lipped about forward facing statements, and others are much freer in an attempt to give customers future guidance.

The split usually falls along the line of companies providing mission-critical stuff to nuclear power plants and hospitals are like sealed vaults, while companies providing less critical products (like music entertainment servers) deciding that their customers best interests are served by a much more informative, If occasionally less perfectly accurate stream of info.

I absolutely do agree that roon should enable the display of lyrics provided by its users - whether embedded in tags or added via an editor (like you can with metadata) - as promised in the thread referenced by @Bill_Janssen. That oils be a great and relatively straightforward addition. 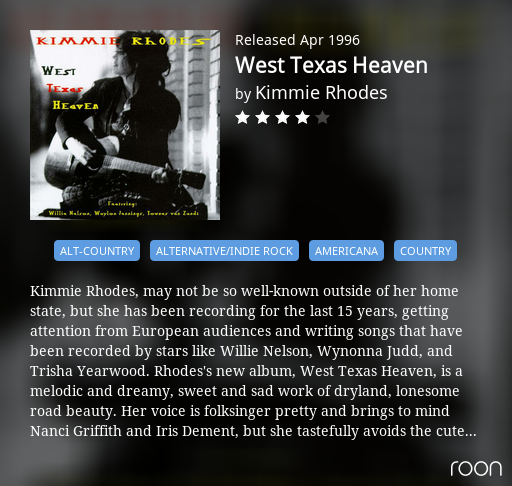 Here’s a curious case. Released 22 years ago, the first 9 tracks have lyrics, the last four tracks do not. 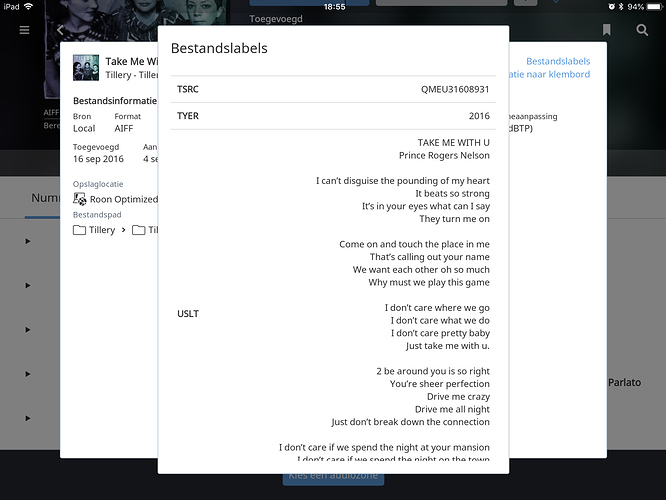 I do wonder why roon doesn’t allow that … not only with lyrics.
If they would ever come near what their webpage tells …

The solution
Roon looks at your music and finds photos, bios, reviews, lyrics, and concert dates, and makes connections between artists, composers, performers, conductors, and producers.
What you get is a searchable, surfable magazine about your music.

would be that nice if that ever becomes true.
But till then (I won’t bet upon this to happen within the next 10 years) it would be nice if one could stick with locally present lyrics until roon catches up offering a working soltution.

Sure I can but as said earlier … roon claims to offer a solution not just an ugly way. I could also see the lyrics if using a hex editor looking into my files.
I can hardly name another software being compiled within the past 3 years which implemented it in such an ugly way? Could you name one?

The whole metadata editing / augmentation thing is for all intents and purposes just about missing in its entirety because what’s there is cumbersome and certainly not geared to users serious about enriching the metadata in their library. I suspect it’s deliberate because Roon often espouses the mantra of users not having to groom their metadata, but the reality is right now users wanting to get the most out of Roon are left with little choice because as @StefanB has pointed out that aspect of Roon is thus far an empty promise. Add to that any artist or album Roon’s metadata sources doesn’t know about and you get no artist bio, no album review and no ability to do anything about it. That’s simply not good enough, not 3.5 years down the road.

It would indeed be better to have an option to show embedded lyrics by tapping the mic icon. Hopefully in the near future…

Indeed roon must to better here. I’m sure the developers are aware but roon evolves at a very very slow pace