Wired ethernet. Can get details if necessary, but suspect it’s not required.

Even when idle, the Roon instance on the iMac uses 280% CPU. This is especially strange as the core is on a NAS, so the iMac Roon app should just be idling. Picture shows Activity Monitor history starting with Roon playing internet radio, then shutting down the app for a few seconds and then restarting. Restarting jumps CPU usage immediately, even though nothing is playing. 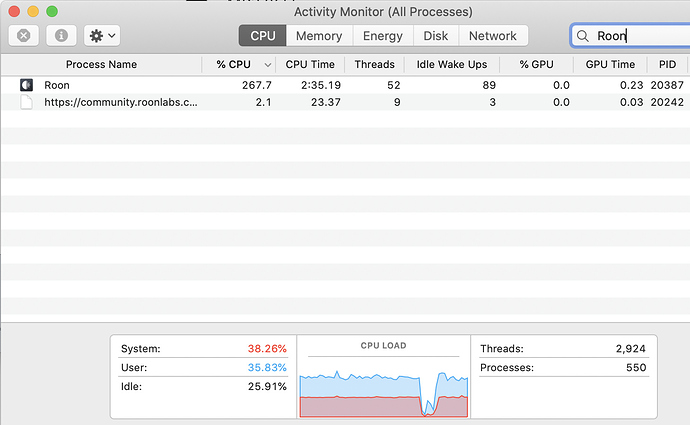 If it helps, I previously used the iMac as a Roon Core, but then installed the core on the NAS and now the iMac acts as a controller/player. 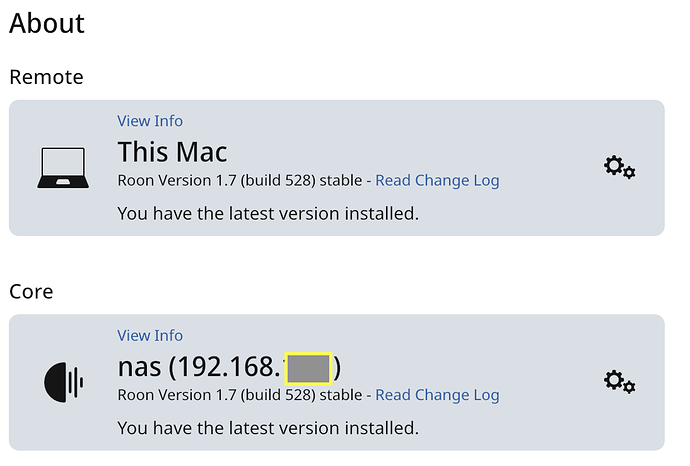 Is there any change in behavior if you try to disable and re-enable your WiFi adapter on the Mac? Does the CPU then temporarily subside?

Same issue here. Roon client only, Core on Linux server. Client on iMac with wired ethernet enabled only. Roon client idle, CPU at 400%. When I enable WiFi, the CPU utilisation goes down to zero.

Any chance to fix this?

Thanks for coming back to me and apologies for the delayed response. I don’t have my WiFi adapter enabled at all normally. Interestingly I tried the opposite (prompted by Peter’s reply earlier today). Turning WiFi on and then off causes Roon CPU usage to fall right down to normal levels - it’s now idling at 0.6% CPU which is sane.

The only other thing I’ve noticed (may or may not be related), is that under Preferences->Services, Tidal is signed in, but with a spinner active. Clicking on the Tidal row, it says “Syncing library now”. I wouldn’t have expected this to go on for too long as I’m not a power Tidal user. Just FYI in case it’s related.

For now I can flip WiFi on and off if this CPU issue crops up until a better solution is found.

I have a similar high CPU issue and the answer is YES to this question. If I turn wifi on, Room drops down to normal CPU usage (5-8%) and then I can turn wifi back off and it (seems to) stay normal.

Hi everyone First, I’d like to say that we appreciate your patience as we’ve continued to investigate this issue. After gathering data from a number of reports, as well as our own testing, we’ve traced this issue to a specific chip that appears to not be handling Roon how we’d expect. While we don’t have this resolved just yet, our QA team is in the process of acquiring this specific hardware for further internal testing in our labs. With this specific hardware in house, we believe we will be …

And several months later and a Roon update and it’s still not fixed. This is ridiculous!

Same here, and I thought my battery was old being drained so quickly. Not at all good.
Very disappointed. Now I have to use the mobile app for most stuff.

New Roon user here. I just installed Roon v1.8 build 764 on a 2020 64GB/10 core iMac running 10.15.7 with a wired network connection. The app immediately got my fans going – which almost never happens on this machine.

I found this thread and tried turning WiFi on. The high CPU burn immediately stopped and stayed stopped when I turned WiFi back off. Now it’s running at < 2% while playing vs crazy hot even when idle before. Clearly a bug.

I am having the same problem on my Mac mini (max spec, 2018 version). It’s a bit disappointing on my first day of using Roon. I’d expected a better user experience, not my Mac going berserk