When my iMac comes back out of sleep mode, with Roon still on in the background, it shows Roon as ‘connecting’.
Stopping Roon and restarting quickly establishes the connection again. In my memory I did not see this behavior in the past, but can not stake my life on it.

My core:
Roon build 29
Windows 2012 server (I know, not formally supported, but as the remote connects immediately after I restart Roon on the remote without doing anything on the core…)
Intel Nuc i5, 16 Gb

Not overly critical of course, but, as I am a lazy person, it would be great if it reconnects itself…

Thanks @rovinggecko – we’ll try to reproduce this and let you know if we need more information.

Everything wifi? Anything notable about your network? Obviously, recent changes would be the thing I’d be most interested in.

WiFi? No, fully wired, 1gb switched. Only my tablets and phones are wireless. No network changes recently.

Will see if I can make a more specific case.

Edit: thanks for the quick reaction of course.

I get this same behavior. With a similar setup, but all wireless.

@mike, I’ve been able to get some more info and have a workaround in place.
I found that when my mac came back from sleep mode it was no longer able to ping my Roon server.
A dhcp lease refresh would fix that for the short term.
Setting a manual ip address in my mac network settings (and allocating it on the router to avoid duplicates at some stage) seems to be a permanent fix.

Interestingly enough, I seem to only have this issue with my Roon server, I can still ping all other devices in my network after resuming from sleep. Maybe there is timeout or threshold or something that Roon triggers?

At this moment seems to be running fine with the workaround.

By the way, changing the Roon remote to use an ip address in the connection (manually setting it), made it connect much faster than using the ‘automatic’ core connection that Roon saved.

Thanks @rovinggecko – we’re actively looking into this one now, and that’s helpful info.

Anecdotally, this seems to happen with OSX remotes, so we’re looking into the steps that reproduce the issue consistently so we can debug.

If anyone is seeing this regularly, feel free to chime in with info about your setup, steps to reproduce, and any workarounds you’ve discovered. I’ll update this thread as we gather information, and thanks again for the report guys!

May be a bit late on this one, but I get this regularly (latest Roon).

When I wake up the laptop, Roon says reconnecting with the progress animating, but it never connects. Restarting Roon remote instantly establishes connection.

Yeah, we have a fix for this coming in 1.1. Thanks Steve.

Great news! You guys really have been busy….

Just to say the connection part seems to have been fixed in v1.1, but for me, I now get a blank screen (black in dark theme) with just the menu button top left. Selecting albums or whatever brings it back. Similar to what used to happen when adding an album from Tidal.

I now get a blank screen (black in dark theme) with just the menu button top left. Selecting albums or whatever brings it back

When are you seeing this?

After my remote laptop wakes up.

Previously (1.0) it didn’t re-connect. Now it re-connects, but with a blank screen. Once or twice it refreshed after 5-10 seconds, but mostly it stays blank and needs a new menu item selected to clear it.

Ok I must be doing something different here, as I can’t get the core to wake up.

Core on Mac mini, which shuts itself down at night and starts automatically in the morning, with roon in the automatic log on routine, but does go to sleep when not in use. Controller on MacBook Pro All running Yosemite, mini Ethernet, MacBook wifi.

When the mini is asleep, roon on the MacBook Pro cannot wake it, it stays on ‘waiting for a remote library’. None of the available alternatives will wake the core, not even typing in the IP address. The mini does respond to wake on lan commands as the Apple’s screen sharing functionality wakes it and then roon connects instantly.

Any ideas as to why it isn’t working for me?

I don’t this function exists? I don’t believe there is any WOL feature in Roon at the moment.

My mini running the core never sleeps. I believe the issue being discussed here is when a remote machine has gone to sleep (i.e. laptop hibernated) and then tries to reconnect to the (awake) core.

My apologies I must have misunderstood and thought it was the other way around. So I’ll just have to wait til 1.2 then.

And this is a new one!
Actually I may have seen this once before.
Same thing, after laptop wakes up. That one needed a restart to fix. 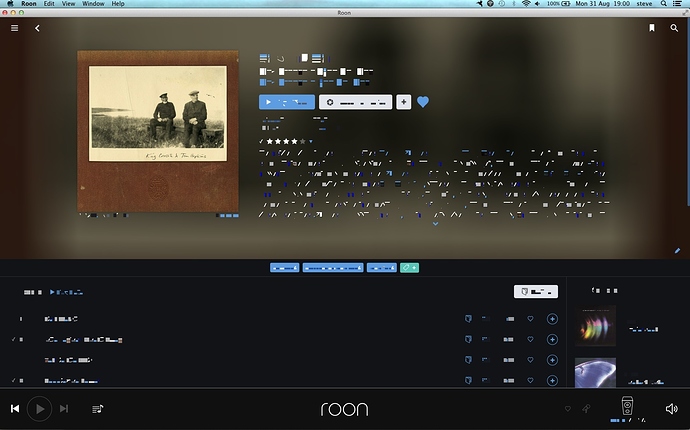 I got this one too today - first time ever. Was fixed by rebooting the remote Macbook.

I also had problems reconnecting the Macbook to the core Mac Mini after coming out of sleep. Most times I have to shut down and restart Roon. I’ll keep an eye out if this better with 1.1 - restarting the remote has become so routine that I don 't notice anymore

I’m still getting blank screen on the Remote after laptop waking - even on the latest version….