In reviews I read that Roon demands so much processor speed, that most hardware and NAS won’t work adequately with it.

Will work, no problem, I’ve even had a 1.8Ghz C2D MacMini do the server part. What does the rest of the setup look like?

You might want to consider upgrading to an SSD in the Macbook and some more RAM, will make it feel like a completely new laptop.

My recent upgrades and additions: SSD in my MacBook Pro, where I installed Roon. I also got the Meridian 218. Great gadget to both use Roon and be able to play Tidal MQA.
Question: how wil I make the (MQA in Some cases) music files on my Synology NAS play through Roon?

You’ll have to provide the location and login credentials in the settings / storagr screen. 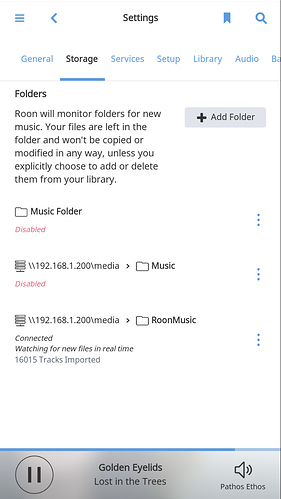 Thnx JanJaap, I followed your advise. It worked out Well. Now I can’t find the spot where it stores the files. I expected it to appear in the menu on the left, somewhere next to Tidal eg. Bout nada. Where might they have gone? Any idea?
Thnx beforehand!

All music it finds (it will show a number below the folder as seen in the screenshot) on your NAS is mixed in with Tidal in your regular album and artist views. The Tidal tab is for music you have not saved to your ‘own’ collection, more of a place to discover new music.

On my iPhone I have to press ‘more’ in the menu to actually show it… on iPad and Mac it’s just there in the left side menu.