So I’ve been a heavy Roon user since 2017. I’ve custom built probably 6 Windows 10-11 Roon cores, and have built my entire audio system around Roon’s capabilities.

When someone sees my system, they take a breath because my system isn’t a DAC, amp, and speakers. It’s more like the bridge of the starship enterprise - Roon remote control points, VU meters, “now playing” artist and album displays, everywhere, throughout an 800 square foot room.

This means my Roon Core runs:

My Roon Core is as built out as I could make it. 8 core 11th Gen i7 (3.60), 32GB, PCIE4.0 M2 drive, etc. Everything is hard wired via 10Gb backbone and at least 2.5Gb network adapters. The local collection is on a big HDD locally on the Roon core so no inbound data stream with local files. No wifi except the apple mobile devices.

Except Roon can’t run all this stuff. It will constantly de-authorize the Roon extensions; album and artist images don’t update; occasionally a remote will go back to the Roon squid logo; and ultimately it will start telling me that files are loading slowly and stop playing. Reboot will fix it temporarily but by the time I get all the peripheral stuff loaded back in, it starts again. After much repetition, it is clear that I am overloading Roon’s capabilities.

I’m not going to stop trying to build out this system, so I need ideas as to how to better stabilize Roon. A few ideas and concerns:

—More RAM? it doesn’t seem to be running out of RAM, albeit Roon gets up to 7GB

—Upgrade to Win 11? Doesn’t seem like it would be the answer.

—Linux build? Learning curve for this Windows veteran. Would it really make it more reliable?

Does anyone else run Roon as hard as I do? Is it rock solid? Ideas?

I have a bunch of different zones for whole-house sound, including a few separate mac minis running HQPlayer into Raspberry Pi RoPieeeXL endpoints. A few Pi endpoints WITHOUT HQPlayer. A few chromecast audio zones. A couple AirPlay zones. Sometimes zones are grouped, sometimes not.

But I don’t run everything all at once.

(The main-floor system is actually ONE Pi zone, which goes into a Luxman L509X > Harbeth 30.2XD, and then the Luxman line out RCAs feed a Cambridge Azur integrated with a Niles selector into four pairs of speakers.)

So, I guess the question is, does the system become taxed when you run only one or two zones? Or only when you’ve got everything running at once?

Thanks for the reply! It’s much more stable when I don’t run it all at once. Still a few glitches here and there, especially if I run a lot of queries using Roon Tags or searches, but in general the reproduceable symptom is loading it all up at once and it fails predictably.

I just think it shouldn’t with a robust enough build. Need some insights from those that push Roon as to what works and what really taxes it. From my experience, it really doesn’t like running the Roon web controller or the chromecast/browser display.

I have 8 zones, also hardwired.

I run a home assistant extension that monitors and turns amps on and off as required, and automatically groups zones sometimes.

While the Roon components are hard wired, the rest of the network is Amplify Alien wireless.

My only issue is occasionally in some places my iOS remotes don’t discover the core. My guess is this is a networking issue where the Roon discovery packet isn’t being routed correctly between the Aliens over WiFi.

Otherwise everything is very reliable, and I don’t see the issues you’re having.

Anyhow my guess is something isn’t working correctly across your network. Perhaps your router doing something odd.

Roon does keep logs - so you could take a log at a time that something isn’t working.

Also worth looking at your router - see if it keeps logs and whether something is happening at the point you have issues.

DHCP lifetime and renewal is one area worth checking

Another thing to try is assigning fixed IP addresses to your endpoints and see if that helps.

You could also try changing your router and see if that helps.

My core is an 8i7 rock - but I experimented with a much slower rock - and everything was still fine.

How many tags and how many tracks albums are in a tag?

About 100 tags; amounts vary as they are multi-level (tags of tags). Mostly the tags are on the artist object, some albums. Each Tag is dozens of artists so hundreds of albums, thousands of tracks.

I’ve noted Roon slows down quite a bit (regardless of what else I have running) when I run significant tag queries to build the queue. But it’s an independent issue when I load up all the web controllers and chromecast/browser displays.

Just curious, what’s the scenario when you’re “taxing” the system? I mean, are you just needing to play different music in every room of the house? So, lots of separate streams?

I always figured if you grouped zones, there wasn’t need for separate streams. You’re just pushing one stream to several endpoints.

And then, if you’re listening in a bunch of different rooms, that would seem to indicate that it’s not “critical” listening, so you could probably ease up on any upsampling/DSP/high-resolution stuff.

My setup is nowhere near as demanding as yours and I had lots of similar issues while running Roon core on a windows machine. I have zero issues since I switched to Rock on the cheapest NUC I could find - actually the lowest spec one in the official list of compatible NUC’s.
You seem to afford spending on hardware, why don’t you try Rock on a NUC or even a Nucleus (which is just a NUC in a fancy case)?

Sorry to not help but what’s your V/U meter setup.

You seem to afford spending on hardware, why don’t you try Rock on a NUC or even a Nucleus (which is just a NUC in a fancy case)?

Does Rock run any spec? My understanding is that Rock is limited to drivers that may not support a higher end NUC? OR any higher end hardware?

It’s better at night as there’s less glare, and I’m watching football now so the system is not entirely in music mode, but here goes, a few pics: 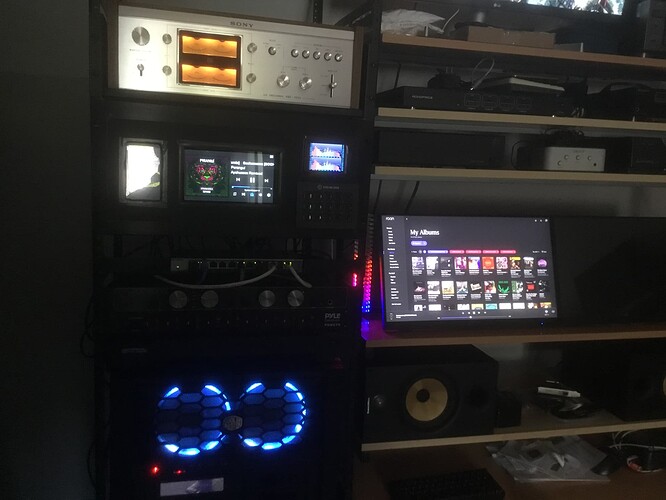 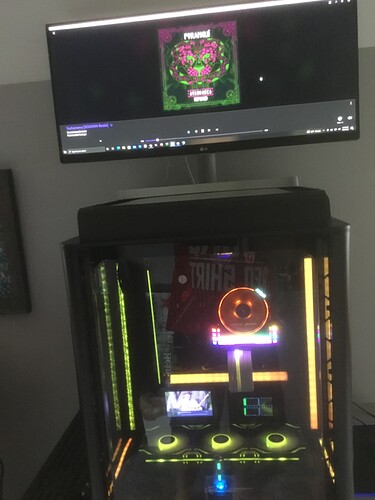 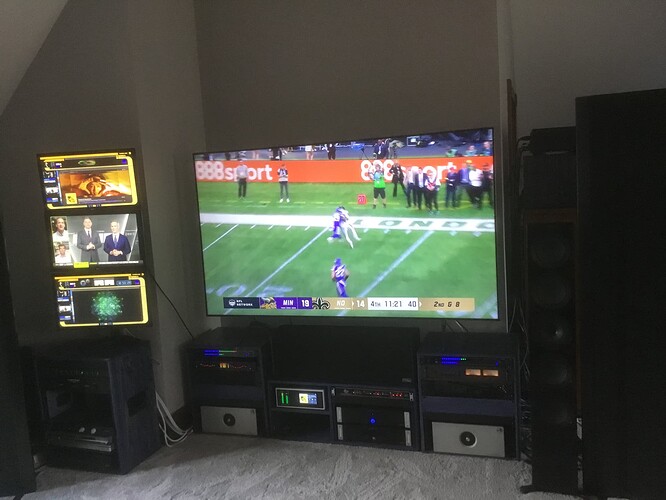 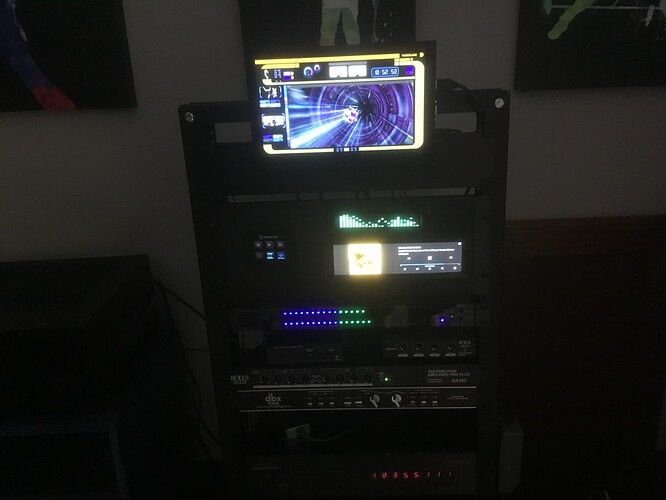 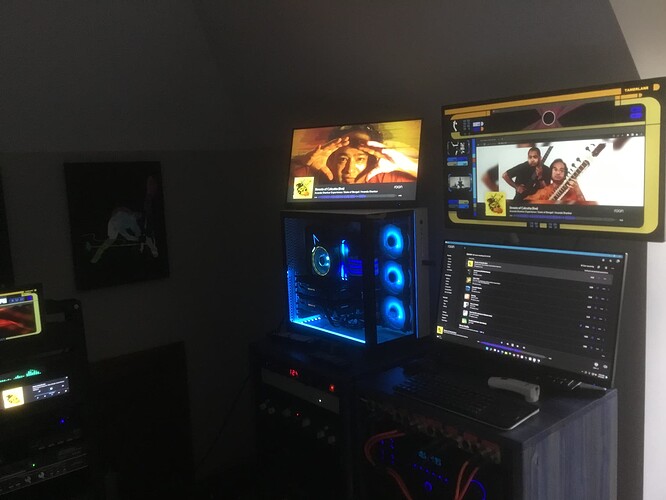 I’m running an NUC with 9 endpoints and up to 12 remotes on a Ubiquity network with as much as possible hardwired. I get plenty of problems and instability. Like you I don’t find the software an industrial strength solution.

I’m running an NUC with 9 endpoints and up to 12 remotes … I get plenty of problems and instability.

This is the type of feedback I’m looking for! What works and what doesn’t?

As an example I notice instability caused by having an iPad displaying Roon next to my main computer which is a Mac using a MOTU USB interface. I think it’s problems syncing multiple data streams. My system is complicated by a radio link between 2 buildings.

Transmitting to a 5 endpoint Libratone system can be a problem. Dropouts etc. Remotes on iphones can be very glitchy. I probably reboot the Roon core 3 times a week every time the OS gets a big update.

What works is the Pi endpoints and screens through Roipeee, although they do occasionally have a problem with the extensions. The audio side of the Pi’s is on ethernet, wi-fi wasn’t stable.

In all if I wasn’t a lifetime subscriber I’d be looking for alternatives. Although I am happy with the time I’ve spent with the software and what it’s done for discovery of new music. I’m not a streaming only kind of person though. I see the attraction if you’re just starting or have got rid of a physical collection but it seems to be the direction Roon are heading so things might get worse for those of us who are using it as a collection management tool.

As another example. I just switched to exclusive mode on my Mac Studio and Roon lost the audio zone. I had to restart Roon on my computer (not the core) to get the audio zone back.

Has anyone noticed if it behaves better at different times of the day? It’s been behaving most of the day but last night it was quite unstable. I wonder if the Roon back end had something to do with it?

I’m on my phone so will make this short but there are two areas you can probably improve.

First, network. Raw speed isn’t your problem but latency and jitter probably is. These devices make requests and Roon responds. Have you looked for retransmits, wifi errors, switch utilization? Describe your network in detail and maybe I can help. Errors can cause applications to “lock” which can’t be fixed with CPU horsepower.

Windows is a problem. I’m not a fan. Have never been a fan. It’s networking stack, compared to what you can do with Linux, is “consumer grade”. I’d try running Roon Server on Linux and see what happens. Additionally, the process scheduler in Linux is superior so I find it handles the errors I describe above better. But I’m old. I’m sure others will argue this is t true anymore.

OP… if you want a Roon server that’s an appliance… build a Linux box dedicated to Roon, preferably Roon’s own ROCK operating system. Looking at all the things you have accomplished with this system in windows world, I’m pretty sure you can figure it out, there’s a lot of good help available in the community.