Share your thoughts/opinions/news about a metal albums/music! It could be your latest find, something that you find interesting or just want to recommend to others. It would be nice to know why you like it or do not!

There are not many metal listeners currently active in this forum, but if you are reading, login and join the community!

I will start with one of my all time favourites Arise. 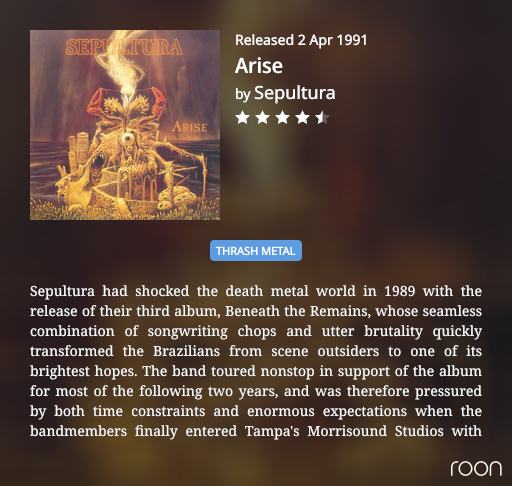 I still remember when I bought this from a local record shop. We only knew that it is some new cool band from Brazil… turned out to be one of the best Thrash albums ever made.

I think Arise is almost perfect Thrash metal album, Beneath the Remains is my second favourite Sepultura album but Arise just combines everything in brilliant way. After Arise Sepultura started to change their style and even if Chaos AD is good album it just did not have same effect.

Sorry if I miss somebody but @Henri, @Rockhound, @the_rev, @Peter_Bruderer, @Michael_Harris you listen metal. It would be nice to hear your album reviews/thoughts!

As a Brazilian, I may say that the apex for Sepultura was Chaos A.D.; subsequent albums started pushing too much into “ethnic percussion” territory under Max Cavalera’s lead, as if to give the stupid impression that most Brazilians were indians living in the jungle.

If you are interested in other great Brazilian metal bands, try Krisiun, Angra (of course), Viper and a band whose debut (and also only album) was simply spectacular (just forget the spoken parts; they were kids with less-than-proficient English): Thessera’s Fooled Eyes.

Do you think Chaos A.D was more popular in Brazil than Arise?
And yes I like Krisium (espesially The Great Execution) and Angra also, never heard Thessera but I am listening it now… sounds like Thessera could have become a very good prog metal band…

Chaos A.D. confirmed Sepultura’s definitive entry into the pantheon of the world’s best metal bands of the 90s. In my view it was more popular than any other album particularly because of MTV and the videos for Territory and Refuse/Resist.

As for Thessera, a good friend of mine is from the same hometown as those kids and knew them personally. He said that after recording their first album, they simply got on with their lives as students/professionals and ended up never returning to the studio (other than for an EP which, to my knowledge, has never been released to the masses).

Definitely a wasted talent as far as prog metal is concerned.

In the same vein, you may also try Akashic.

Unlike some of you here, I am not a metal head, just someone that likes music, some of which happens to be Metal.

Well in 1982 I was all Depeche Mode, Human league, Echo and the Bunnymen and the Cure (and still am to this day).

While I was at a friend’s house, he put on The Number of the Beast album by Iron Maiden and it absolutely blew me away with it’s power, precision and relentless thumping beat.
I walked into town the next Saturday to buy it on Vinyl (and still have it if not a way to play it)

Two months later at the age of 14 I was off on my own to see my first ever concert. I had no idea what to expect but made my way to the front and didn’t hear anything clearly for 2 or 3 days after that. 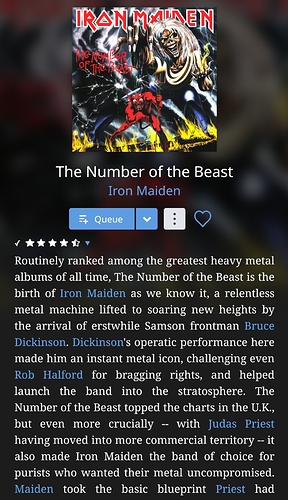 Great story, that concert at the age of 14 must have been something special! Was it just this album or did you collect other Maiden albums after that? And what is your favourite song of the album?

Agree that it is excellent album, can’t believe it is almost 40 years old…

—
(I edited the opening post (realized that I wrote it to be too restricted to favourite albums). This thread can, of course, also be used for general metal discussion!)

At 14 I had no idea what it would be like, maybe a bit to Yong to have traveled there on my own to be fair.

Almost 40 years and I can remember the support band (Waisted or Wasted) coming on stage and thinking oh Fcuk this is loud, and it was, but Maiden came on and unveiled two additional massive sets of speakers (they turned it up to 11).

Favorite song on that album is Run to the hills, being the first song I heard. But probably the best is number of the beast (absolute classic Maiden).

Probably my favorite maiden song is rhyme of the ancient mariner, and generally prefer Bruce Dickinson as front man, but open to most Maiden.

For me, Iron Maiden is THE best metal band in the world, period. Everything from the quality of compositions, the integrity and intelligence of band members to the unambiguous respect for their fans puts them far ahead of anyone else in the genre.

Iron Maiden was my first metal tape in my first sony walkman (“Somewhere in Time”), so I will ever like it…

Same here: listening to them during difficult times (especially No Prayer For The Dying, Fear Of The Dark and Seventh Son Of A Seventh Son) was a great psychological help when I was doing Military School.

Thank you @ds_2 for the invitation.

I did listen a lot to R&B, Rock and sometimes classical. I had already 2500 records, when I had to work with a guy. He was a full metal head. Playing bass guitar in several unknown bands. The ugly staff. We had to travel a lot together and always had discussions about music. He introduced me to symphonic and epic metal. So I met Rhapsody. I do like the opera like touch of the music. 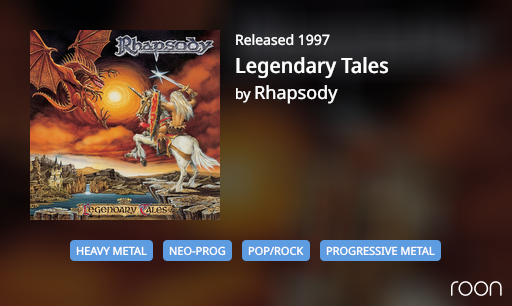 Rhapsody started as project from Luca Turilli. He wrote 5 concept albums, known as the Emerald-Sword-Saga. Legendary Tales is the first album of this saga. Later they did another project called the Dark-Secret-Saga. This time with orchestra.

In 2006 they were forced to change the name to Rhapsody of Fire for legal reasons. Like other bands they went through fights with management, started solo careers had partial reunions. But anytime when one of these guys launches an album or is part of another project, it is worth listen to it.

Thanks Peter I have just added this to my library and to my current listening queue.
Not a band I have ever come across, but I hope to be enjoying their music later this afternoon

Just couple months ago I discussed Turilli’s work with my co-worker. He explained all band names that Rhapsody/Turilli have had

Not the most clear discography.

Have you tried other symphonic metal bands from Italy like Genus Ordinis Dei: Glare Of Deliverance or Fleshgod Apocalypse: King? Or are death metal focals on those too much and you prefer clean vocals?

Iron Maiden is always impressive. 3 or 4 years ago we had the opening of one of the longest tunnels worldwide in Switzerland. At the same time Iron Maiden gave a concert in Luzern. Angela Merkel the German chancellor and Francois Hollande, French president were visiting the opening of the tunnel. Their planes were next to each other. The first one from Merkel, the second one from Hollande. The third one is obvious. 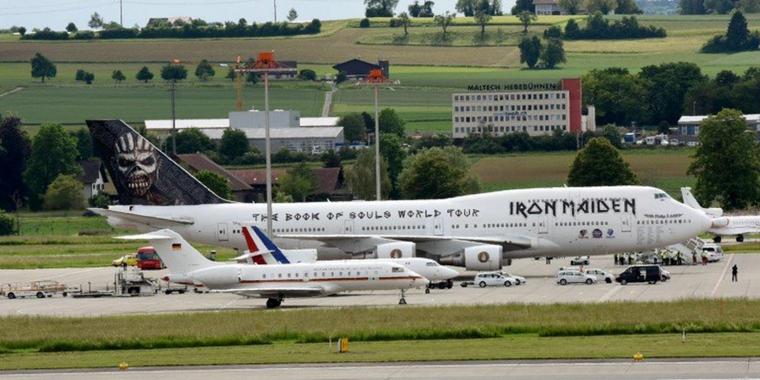 It is very clear: Iron Maiden did win.

No, I do not know them yet. I went more the northern way. Bands from Sweden, Netherlands, Finland, Germany … Female Front Singer Metal. Bands playing in Wacken are often on my list.

I do not really have a direct preference with voices. If the album is just growl, hmm. But on one of the records from Epica, don’t remember which one, there is a duet with growls and clear female voice. I like that a lot.

Well, now I also listen to death metal and similar. If I like the music for any reason, I do not care about the style.

I’m going to try these two. Thanks for the tip.

Just adding my 2 cents regarding Iron Maiden. I’ve loved them since I was a teenager and have been lucky enough to see them live several times.
For anyone who hasn’t heard it, listen to ‘Die With Your Boots On’ off the ‘Piece Of Mind’ album. Absolute classic heavy metal

I do enjoy an album with a theme, and there is something about Italian Metal/Goth/Symphonic Metal bands that make me enjoy the ones I listen too, a sense of theater maybe.

Somehow they remind me to the big Italian composers. Like Verdi. I was once told, that Luca Turilli took his inspirations from Lord of the Rings. In his second saga he got Christopher Lee as story teller. So if you like them, there is quite a bunch to listen to.

I’m currently listening to the recommendation of @ds_2

Amazing timing as I added Glare of Deliverance to my queue about 15 mins ago.
I think @ds_2 might have put me onto them when I posted some other Italian Symphonic metal into the what are we listening too thread. I have added a few Rhapsody albums into the listen later list.

You are correct that this feels like an epic tale, I almost referenced Elric of Melniboné in my response while listening, but that is not quite right (as much as I was a fan in my teenage years).