To save people wading thru several pages, including a mistaken measurement by Amir at the beginning:

The audioscience tests (done in DLNA mode) seem to show:
a)the mR, in DLNA mode, does not improve the audio output compared to using a standard laptop.
b) that the iFi PS actually adds noise.
c) that used with a quiet PS, the mR output is equivalent to the standard laptop results.

Question is why the mR should be so sensitive to PS noise? Isn’t it supposed to mitigate noise?

Amir hasn’t tested NAA mode to see if the conclusions are any different.

Also, just for those that aren’t aware there’s some history between the tester and some people involved in the uRendu design, so I’d say things are far from being unbiased.

That said I’m all for people taking measurements and checking the claims of manufacturers, it’s just a shame there’s obvious bias. It seems even the person posting the link had an agenda based on his comments in the linked thread, and previously regarding the regen.

Interestingly I found the regen did nothing in my system but the uRendu seems to bring a positive result with the ifi even. But I’m somewhat perplexed by the ifi/rendu measurements. It does make you wonder whether any measurements were made by the manufacturer at the design/build stage if their recommended base power supply adds noise, and even why this should happen with the devices design claims…

@danny2 Nope. The measurements demonstrate that the device does nothing to improve the DAC’s performance even with a low noise PSU. With the ifi PSU, it makes the DAC perform worse than connected directly to a laptop mobo via USB.

I think if you read @danny2 post, that’s exactly what he is saying.

Well the mR and iFi were an improvement for me over the CuBox-i and bog standard switching supply. And that was an improvement over a 5m USB cable direct from the BRIX. So I guess I’ll just have to muddle through in my world of illusion and imagine I’m happy

My first posting was incorrect, so I edited it to reflect what the findings on the other thread actually said.

Again, I’d still like to see the measurements done with the mR in other modes, especially NAA, where it isn’t doing any processing of the audio - just a pass thru.

In my setup I using the mR in NAA mode definitely sounds different than using it with HQP directly from USB of the server. I prefer the way it sounds when using the mR. Could I be hearing noise? Possible.

I’ll be getting an upgraded PS for the mR and then will have a better idea.

That said I’m all for people taking measurements and checking the claims of manufacturers, it’s just a shame there’s obvious bias. It seems even the person posting the link had an agenda based on his comments in the linked thread, and previously regarding the regen.

The same could somewhat be said about Chris Connaker’s review when Sonore and ifi are both paid sponsors on his site. Obvious bias.

Biases aside, the measurements do debunck the main claim of ultra low noise compared to regular computers. I’m sure similar unsupported claims caused the rift with Amir with the regen.

If the microRendu actually improves sound in someones system will always be a subjective opinion and it’s their money.

The same could somewhat be said about Chris Connaker’s review when Sonore and ifi are both paid sponsors on his site. Obvious bias.

Yeh, the man’s mind is blown on a regular basis.

Yes, noted. I had thought the same re the CA review - it is hard to think of it as independent or unbiased. Being split into two well separated sections, with part I at launch also felt pretty staged and advertorial. But, I do like the device myself so am intrigued by the findings.

As I said, I actually like people putting companies claims to test, but I simply don’t trust the motives or tests linked above. It’s clearly very easy to make a measurement incorrectly especially if carried out in ‘home science lab’ type environments by amateurs. Equally, if the findings were verified elsewhere it would be a bit embarrassing for all of us that bought into it.

Hopefully Sonore won’t follow the debacle of Uptone’s handling of the WBF findings on the Regen, and will come back with some proper measurements and evidence of their own to show that the uRendu design is solid, and that it was rigorously measured and tested and performs as claimed - with the ifi or otherwise.

I am not waiting for new measurements, claims and reviews where the reviewer does not use his ears, and does not compare the device with other devices ( at the same time and condirions) and writes the findings down more or less unbiased. I’m happy with the Microrendu, and have no doubt it sounds better than my previous optimized Nuc solution.

The only measuring instrument needed is one’s own ears.

[quote=“AllenB, post:109, topic:8219, full:true”]The only measuring instrument needed is one’s own ears.
[/quote]yip, coupled with expectation bias they’ll do a fantastic job hearing what you want to hear.

I don’t suffer from expectation bias.

measurements of several PS, including the IFi. In this one, unlike Amir’s, the iFi has good measurements. Noise produced by it is basically all below audible level, and much lower than standard wall wart.

@danny2 , even with a cheap RME uncalibrated ADC, anyone can see the low frequency noise. That’s nothing to be proud of. It’s consistent with Amir’s measurement. Btw, Amir uses an AP. 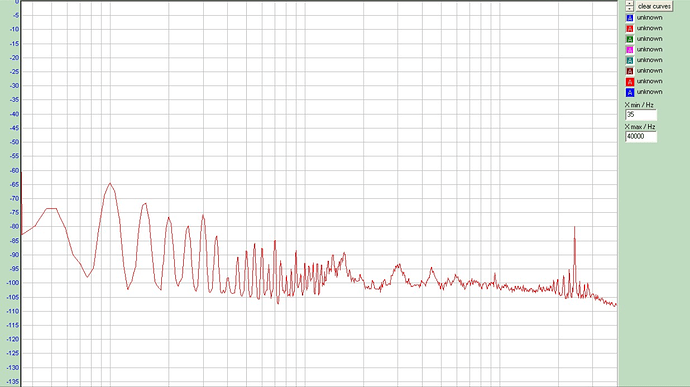 My point was that the iFi is a replacement for a standard wall wart.-both in form, size, and how it is marketed. It costs $50, not $300 - $1500 like most “audiophile” PS.
Seems to me the results show it is much lower noise than a $5-$10 wall wart. Is this graph not consistent with what iFi claims as it’s output on their web page (not the marketing speak, the numbers)?

I don’t expect it to compete with a more expensive linear PS.

BTW, the other factor generally never talked about is how much noise a PS throws back into your home grid, where it can get back to your components. Even some fairly expensive linear PS are know to be quiet on the output to the powered device, but to be noisy in terms of what they put back into the system on the other end.

@danny2 this thread is about the micro rendu. Amir 's measurements demonstrate that better DAC performance is achieved by not using it as its shipped with the ifi PSU. His measurements show its better to simply plug the DAC into the computer USB. The thread you linked to is a measurement of various power supplies. So it doesn’t have much relevance to what’s being discussed here. Moreover Amir tested the microRendu with a lab PSU and it showed to produce DAC performance equivalent to a USB to mobo connection.