The following is wrongly identified: 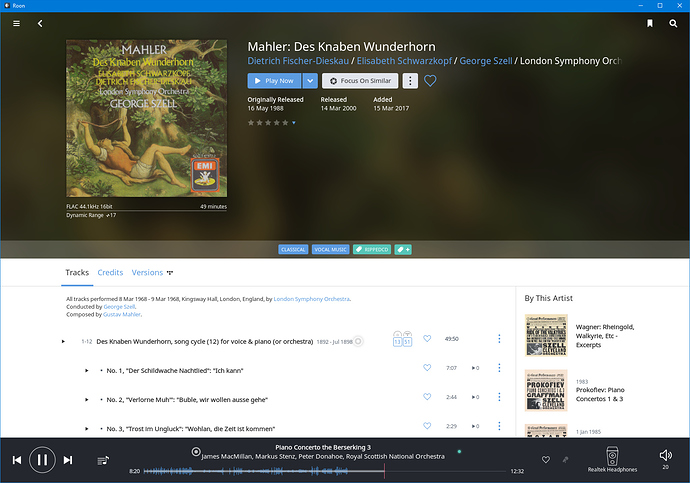 This identification corresponds to that at https://www.allmusic.com/album/mahler-des-knaben-wunderhorn-mw0001938178 .

What I have corresponds (if I check the booklet enclosed with the CD) to this: https://www.discogs.com/Mahler-Elisabeth-Schwarzkopf-Dietrich-Fischer-Dieskau-London-Symphony-Orchestra-George-Szell-Des-Kna/release/10289901 .

How do I tell Roon which to use?

I don’t think roon is really designed to do all of what you want but you can get someway to achieving your goals. Maybe there are roon features I am not using so I am interested in this question and other suggestions as well. At the moment, this is what I do.

Personally, I have not found with a lot of classical music that identification at this precise release level of detail happens very often. Very hit and miss. But, if it is important to you, then in the album editor you can also edit release dates, product and catolog numbers and of course album art to match your particular release. I have only gone to this trouble a handful of times as it is too much work and except for the release dates all this detail is hidden in roon’s spartan views anyway. But where I have a favorite album and I have multiple masterings I do make sure I have different album covers so I have a visual clue, what is what.

But, if you want the wording of the composition title to match exactly what is on your release, then this is another matter. With multi-part works this is currently unsupported by roon. Your only choice is to “unidentify” the album so you can align the wording to your release but I cannot imagine why you would want to do that. This limitation causes major problems if you have a lot of “transcriptions” as these generic composition titles do not cater for variations in vocalists, ensemble, instrumentation or orchestration. I do not know where allmusic (rovi) gets these “generic” titles for works. But I have 4 versions of “Des Knaben Wunderghorn” and none of them use the allmusic generic wording if I look at the catalog information or artwork. In fact I would go as far to say that almost none of my classical recordings use the generic “canonical” composition names being used by allmusic (rovi). So there will always be this miss-match.

There are probably other things you can do to manage a classical library at a “release” level implied by your question but it will be limited by the amount of manual intervention you are prepared to make. I don’t think roon has a fully automated solution at the moment although I may have missed something.

So I am certain that my CD is that described by the second link I gave above and thus that Roon is completely wrong about what’s on my CD.

How do I get Roon to find the right information? This is not a picayune mistake.

Assuming the track numbers are correct there is another possibility. I haven’t got that particular disc but I do find what you are describing to be quite a common problem. More so with pop music than classical where the running order of songs can vary a lot from release to release. For example, running order will vary from country to country of release, live or studio version, or from original release, bonus disc release, deluxe release or super deluxe release.

It sounds like in the identification process you cannot get an exact match for your particular release. What I do in these cases is I externally tag the files to match the catalog/art work. Then in roon you can “prefer file” for at least the track titles. You can “prefer file” also for a number of other identifiers. This way the song titles will match the songs you are hearing

I haven’t found another less manually intensive way of fixing this. Sometimes you can get an exact release match during identification but I have only seen that with mega-selling pop albums. With more specialist classical works roon often requires quite a bit of manual intervention I’m afraid.

James, Roon knows about 5 different versions of this album. It looks like you (and I) have version 2. You’ll have to help Roon choose the correct version. I’ll also have to tell Roon to use the cover art from the ripped tracks to get the correct match there as well. 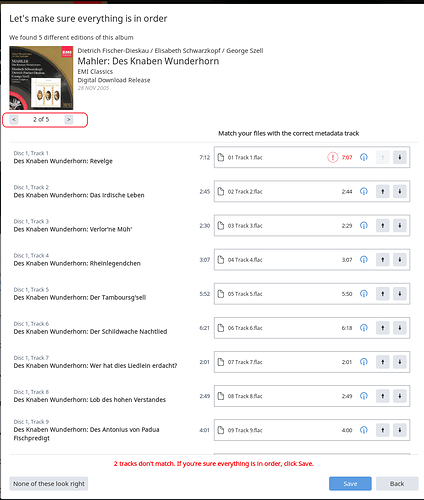 This is an interesting one. You see, on the two releases you link to, (a) the personnel are the same, (b) the track timings are so close that one really can’t be anything other than a re-issue, and (c ) both the Discogs entry and the allmusic (TiVo) entry say that this is the 1968 recording at Kingsway Hall.

So… We have the same set of 12 tracks (give or take re-issue truncation of a second or two). Which metadata are correct? Discogs or allmusic?

The answer is on the back cover of the allmusic album.

TiVo has made a mistake and applied a “standard part list” for Das Knaben Wunderhorn to this release.

To get the best quality metadata, I would submit a correction request to TiVo (via allmusic) here:

All you have to say is that the part listings for the performance do not match up with the track titles on the back of the CD cover. It won’t take that long to get sorted out.

Having said all that, the metadata you’re after is available via Roon. Do a manual identification and select the option “This is the metadata that is currently being used for this album”. Then pick the 2nd release (2 of 5): 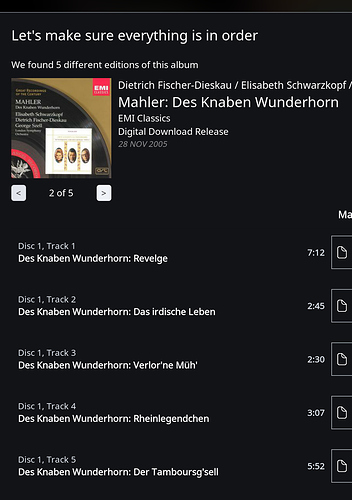 I didn’t check track numbers. But I just found that the wrong listing and the correct one have 10 (out of 12) songs in common (but different in order). The wrong listing uniquely has “Es sungen drei Engel” and “Urlicht”; the correct listing, “Revelge” and “Der Tambourg’sell.”

I submitted a request for correction at AllMusic.

Glad it worked out.

Had a look at IMSLP and was surprised to see that different running orders for this song cycle must be more common than I thought. Learnt something.