I have Roon (v1.5 build 334) nicely outputting 5.1 recordings wrapped in a 7.1 container over HDMI to an AV processor. I can choose whether the surround channels use the surround or rear speakers using the Rear/Surround swap option in device setup.

Since I cannot get 5.1 audio to work with a 5.1 container (same issue as Mr. Goff), I wanted to spread the surround channels to both sets of rear/surround speakers at different levels. A perfect case for the Mix tool in Procedural EQ.

When DSP Engine is enabled, all processes being still disabled, the surround/rear channels swap, same as if using the swap mode. Turn off DSP, they go back. I can also activate the Rear/Surround swap mode whether DSP is on or off. So that’s one thing that’s perplexing.

Using the Mix tool, I see two other problems:

Does not matter which channel is the source, the issue is not being able to light up the opposite pair of surround speakers. Due to that, I cannot spread the surround audio to both sets of surround/rear speakers.

Assigning a source channel to any of the other output channels appears normal – the sound comes from the designated output at full level. Something specific to the named Surround channels is the issue.

Anyone else observed this behavior?

I was able to reproduce the “Swap Rear/Surround” behavior enabling itself when enabling “Mix” in Procedural EQ. I will forward this information to the Dev team for further investigation. I have a few questions which will help us diagnose what’s happening here

Thanks for looking into this. Glad you could confirm part of the issue.

Roon is running on Windows 7.

Yes, there is an undesired level drop, and also when remapping to surround or back outputs, only one set will ever be used, not the other.

This chart may help explain better. I hope it makes sense. 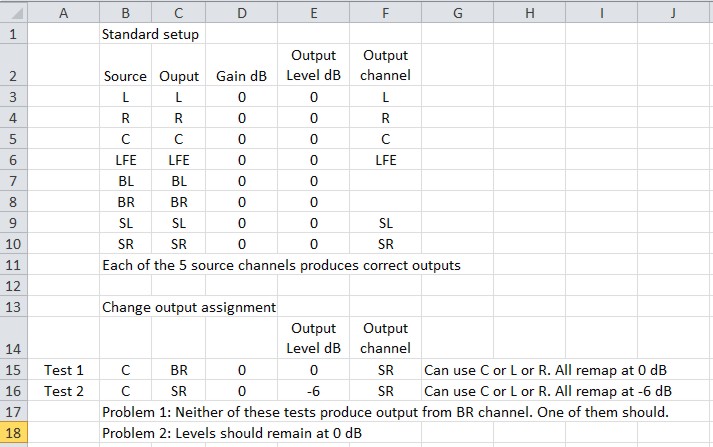 Just an update… We’re continuing to investigate this issue, along with a few other issues that have been reported to us regarding multi-channel support. While I don’t have an ETA just yet on when to expect a fix, this is defiantly on our radar and I will be sure to update you when I have more information.

While I have not heard anything further about this matter, I tried setting up the mixer again today and it’s apparently working! I did not perform the specific tests I described above, but just my original use case, which is to spread the side surrounds to the rear surrounds so that 5.1 music will play on the 7.1 speakers, all at -3 dB.

I doubt the improvement was due to upgrading from Windows 7 to 10, but that happened, too.