Mix up of the Swedish band Friends/The Friends

Artist page of Friends is a mixup of two Swedish bands.

The Artist bio describes the Swedish band “The Friends” who was a mods group from the mid 60’s. However, members and artist data on the right is referring the TV show constructed band from arround 2000.
The picture i have no idea what it’s depicting, doesn’t match neither.

This band is credited on my Alicia Keys - Unplugged , which is not true.

And the Discography is mixing in some Asian band also called Friends? 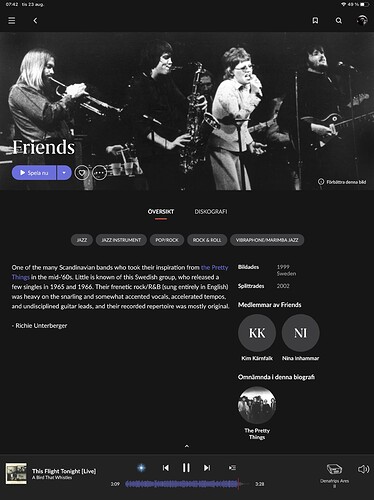 Alternatively, if a specific Roon problem there’s a “few hoops to jump through…”

How to report metadata issues Metadata

the same problem if you log in directly to qobuz

Not quite, Qobuz uses another artist picture. Probably the same band as Roon? However the bio on Qobuz is the same as in Roon, referring the 60’s band.
And on Qobuz all albums presented are from the Asian band…

It may be worth chasing Qobuz first, Roon will be getting the metadata from there so get the source right first. Then if Roon is mixing things up as well you’ll know as the source is correct.
Qobuz usually correct their data within a few days once the error has been reported, Roon can take a lot longer. Good luck