I’d say I see as much pro-MQA “ranting” as anti-MQA “ranting”. I try to avoid either one as I have almost zero interest in the topic.

edit: often one person’s rant is another person’s “stating of facts (as they see them) to try to change another’s mind”.

That depends what you understand by the term …

Nagging maybe but not ranting.

It simply means to talk incessantly about something without intending to change someone’s opinion.

Whether or not we agree with a comment about a topic that interests us, it’s clear that most people are passionate about their point of view. This rarely gets out of hand; we can thank the moderators for this–much of their work is done behind the scenes.

But even if someone is angry and impassioned it’s fine as long as they don’t direct their anger at another member of our community. It seems appropriate in an audio forum that some people may sound like a broken record. My simple solution is to switch off and ignore these comments; they certainly shouldn’t be censured.

This is Roon’s house - its is not an open public internet forums. Their house, their rules. Free speech is rarely ever free speech without consequence.

Now as it happens, I think Roon are actually very liberal. I have seen posts from Roon employees (I think maybe it was Brian) expressing that even rude and disparaging posts have their place as feedback and should not be ignored unlike many companies who go so far as to remove poor feedback and very definitely anything not delivered with a very polite tone.

I think it actually takes some guts to have that kind of attitude and they should be applauded for being as liberal as they are. I also think that over time the product benefits from this kind of openness and honesty. People can often let their politeness slide when they extremely frustrated. In many forums that will mean an issue is completely ignored with the poster probably even being banned just adding to their frustration.

Now I absolutely do not condone such posts, however I think Roon and their moderation teams have found a very refreshing balance. Right now you are annoyed as you have ended up on the wrong side of it. You will get over it, and at least you get to stick around to get over it.

I think there is a Chinese proverb that goes something along the lines of when in hole, stop digging

Censored for saying "“So MQA sounds good then, all the rest is talk”, yup moderation.

Moderating “So MQA sounds good then, all the rest is talk”

By telling people that they aren’t able to control themselves? What happened to manners

You will get over it,

I would get over unfairness or rudeness, why should I?

I think there is a Chinese proverb that goes something along the lines of when in hole, stop digging

There’s probably one about calling out something that’s wrong as well. I’m not in a hole, I’ve just had dinner, very nice.

You suggest directing anger at a member is suitable for moderation, so I pointed out what I was moderated for. It’s not quite as you paint it, tell me how terrible my comments were. That was my point.

I have no idea what you were moderated for since it was moderated. If you have a beef about this then your recourse would have been to reply to the moderator in a PM not opening a thread.

So much wasted energy and emotion in this thread.

I took pains to tell you, is this a wind up?

I did, it wasn’t responded to and the moderators started this thread. If you’re not following this, it kind of begs the question why you’re chipping in (other than a wind up)?

So much wasted energy and emotion in this thread

Not at all. Is your comment ironic (i.e. why comment if you think it’s waste)? I’m a bit slow.

… the moderators started this thread …

It doesn’t read this way … opening post is yours. Nonetheless, I’m calling time on this thread.

Out of curiosity why is that? Ranting pollutes but you can’t call it out?

This thread is turning into this meme. 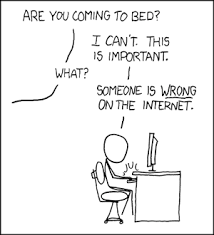 It doesn’t read this way

Maybe it was supposed to. Started by the mods.
[Moderated]

This thread is turning into this meme

I though it was about censorship and free speech but hey!

As I see it the rule is pretty simple and pretty much universal on most forums:

Maybe it was supposed to. Started by the mods

For clarity … the original post was off topic so was split out … there is a link to that other topic just below the first post.

Been following this thread with interest but I haven’t felt compelled to respond until this.

I have a 5 year old boy and a 10 month old baby boy. My sister-in-law thinks it’s fine to use offensive language (F$ck/C$nt) in front of my children (and everyone else’s for that matter).
I am definitely not happy when she comes into my home using this language and I most certainly try to moderate her (in fact I don’t want her in the house at all), my father-in-law is the same, what’s more is that they feel it’s fine to put on violent shows such as Games Of Thrones in front of the children and to leave them unhindered on YouTube watching whatever they want to. They don’t believe in censorship or moderation and feel that children should be aware of these things and that it does not harm them. I have several friends in the military who have served in the Middle East, according to their experience it takes less than 3 months to de-humanise an individual enough to think that taking their own life and that of others is a normal thing to do.

Understandably I try to limit the time they spend around these individuals and I most certainly censor and moderate what they are exposed to.

Are you saying that your home is a free for all?

Also I see you said earlier that you are canceling your Roon subscription because of the censorship and moderation of this forum? You really do feel strongly don’t you?
That feels a bit like “cutting your nose off to spite your face”.
Surely it would be more beneficial to enjoy Roon and not come to this forum?