I am unable to make Roon to use the audio interface in Wasapi (exclusive mode), when using this mode, it shows an error saying: “Failed to initialize audio device”.

So right now I am using Asio mode, but when starting the next song, I get a very broken version of the song, just random noise, then I have to pause, wait like 5 seconds and play again, this will fix the audio without problems. Sometimes this fix doesn’t work and I have to just skip to the next song, but the same happens, basically I just can’t listen music.

This issue doesn’t happen at all when using Tidal desktop application, it can use the MOTU M2 in exclusive mode without problems.

In my failed attempts to fix it, I found that the driver properties of the USB audio interface says “Driver not migrated”, I already tried all the possible fixes, including updating my BIOS firmware version, but that didn’t fix it, I still get both problems (Wasapi and audio glitches in Asio mode).

At this moment I don’t know what to do.

Any help would be deeply appreciated!

This is can be due to a Windows Update error. You can read about similar issues on Microsoft answers forum. But, I’ve copied the most applicable suggestion here:

So, uninstall the driver and install the latest driver from the manufacturer. At this point, it is not about fixing Roon, it is about fixing the driver issue on your PC. Even if your other software does not seem impacted, imho, you should correct this error first.

I tried that several times, I get the same result: 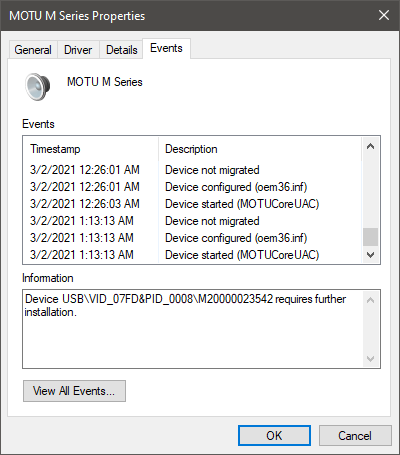 All these Device not migrated have the same error message:

If you have uninstalled the Motu driver and re-installed using the latest version (MOTU M Series Installer 4.0 (84479).exe), then I would suggest you contact Motu Tech Support as they may have better insight into what the issue is with their driver.

Btw, just another user, Official Roon Support will be by and they may be able to suggest something else.

I tried the nuclear solution, reinstalling Windows, it fixed the “Deviced not migrated” but Wasapi in exclusive mode still doesn’t work.

I guess it is just not compatible, also can’t find any related problems on Internet.