Is there any word on when Bluesound will support MQA in Roon 1.5 ?

Hi Gary. MQA seems to be working fine on my Node 2 thanks to Roon 1.5. Dont think Bluenode will ever update their RAAT version to support it natively on the Node 2 via Roon.

I have my Node 2 set up as @Peter_Hafkamp suggests: Roon decodes and my Node 2 does the rendering. Works as advertised.

Michael how did you make that setup if I may ask?

@oradba69 Go to the Node 2 device set-up (gear icon next to device) and select advanced settings. You’ll see that you may select rendering only for the Node 2.

In this case, the Bluesound device will not be completing the rendering process due to their implementation of the RAAT SDK. While most of our Roon Ready partners have released updates to allow for MQA playback if their device supports it, Bluesound is still working on their implementation and has not committed to a timeline for a fix.

I would recommend leaving the Bluesound devices MQA Capability setting set to “No MQA” support ensuring that “Enable MQA Core Decoder” is on in advanced settings for the best experience. This will get you the “first unfold” of MQA content which is a 24/88.2 kHz or 24/96 kHz stream for your device to playback.

Thanks. That answered my question.

Whoops, sorry for passing along faulty information! I was ignorant of the issue preventing rendering via the Node 2.

Setting the Node 2 to “Decoder and Renderer” will now allow full MQA playback from ROON?

Setting the Node 2 to “Decoder and Renderer” will now allow full MQA playback from ROON?

@anon82498359 I think a majority of people on this community forum set Roon to do the first unfold (decoder) and set their Bluesound unit – a Node 2 in my case – to do the second unfold (renderer). Thus, when you access the settings on your Bluesound unit, select “Renderer Only” under advanced settings. Works great! I have seen that some people have issues on certain Bluesound units with this implementation but the Node 2 is solid.

Thank you. These are my current settings too, I was just curios if something changed after the 2.18 BluOS update.

Thank you. These are my current settings too, I was just curios if something changed after the 2.18 BluOS update.

@anon82498359 Yes, something did change after the most recent BluOS update. Prior to the update, one could only get the first unfold of an MQA file via Roon. With the recent BluOS update, which adopted the latest Roon RAAT, you may now get the second unfold. In sum, you now can hear an MQA file as was intended. See the signal path below and you’ll notice that “rendering” in now occurring! 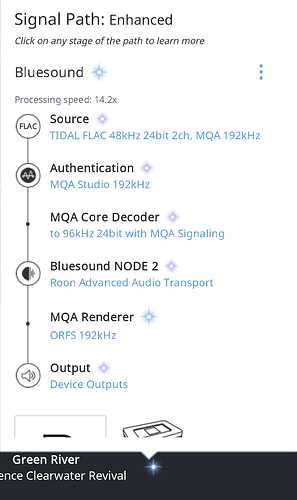 You can check it using the digital output of the Node2.
When you play a 96KHz original samplerate MQA file with the bluesound app the connected non MQA dac will show 96KHz input.
When you set the Node2 in Roon as decoder and renderer and play the same file to the Node2 the dac will show 48KHz input.
So the Node2 doesn’t do the first unfold and is only a renderer.

Thank you both. I’m counting bites for a living

so my mind it’s so full with digital stuff that the only thing I care about music it’s… THE MUSIC and I do not want to go too deep in never ending technical details.

It was the same situation that Peter_Hafkamp described above (i use the Node 2 just as a bridge between the network and another DAC) that caught my attention. The music still sounds the same but at least now i know why

I’ve tried that, the Node 2 sounds too digital to my ears, compared with the other one I have (and now I use).

You need the analog out for the second unfold, the digital out only does the first unfold .

You need the analog out for the second unfold, the digital out only does the first unfold .

@Peter_Hafkamp Peter, I could be wrong but prior to BluOS firmware 2.18.0 I think the analog out on Bluesound was needed for the second MQA unfold, as one had to access the internal DAC of the Bluesound device, independent of the Roon stream. With the recent BluOS firmware update, implementing the current Roon RAAT, I believe that the second unfold in the Roon stream is accomplished without the need to involve the Bluesound DAC. Thus, I believe you can unfold completely in Roon and still output (in my case) the Node 2 through its digital outputs, in my case, coax. Can someone else chime in with their thoughts on my accuracy?