Calling in the troops on this one! @support, @noris, @mitr…

In order to stream internet audio and video content around my home from a PC in my basement (Dell with i7-4790, 3.60 GHz, 16 Gb RAM), I take the HDMI out of the PC, run it through an HDMI splitter with one end going to the monitor in the basement at the PC location and the other end connected to the sender of a Monoprice Bit-Path AV HDMI over Ethernet Extender (https://www.monoprice.com/product?c_id=101&cp_id=10105&cs_id=1010504&p_id=14158&seq=1&format=2). The opposite end of the sender is ethernet connected into an unmanaged switch. That switch, in turn, is ethernet connected to my Roon core server, to my Marantz AV7702 pre/pro in my main system, to a Monoprice receiving unit (which is then HDMI connected to my Marantz AV7702 in the main system to allow me to see and listen to the internet content on the TV there) and to a Actiontec MOCA 2.0 device to allow me to move the basement PC HDMI content throughout my home via the cable TV wiring in my house.

This diagram essentially shows what is occuring:

The “source” is my basement PC HDMI output and the links from the switch to the various receivers are the MOCA 2.0 ethernet over cable runs.

This setup works like a charm. I can watch and listen to the content from my basement PC in multiple areas of the home.

So, this all led me to think about using products I have retired from use to listen to mulitchannel audio in my bedroom. I have a MOCA 2.0 device in the AV cabinet there and with the Monoprice receiver, I am getting the basement PC audio and video content playing out fine. My audio receiver is a legacy Marantz SR5000, which has analog multichannel audio inputs. I have my old Marantz AV7005 pre/pro still and it does multichannel from its HDMI inputs and uses the Audyssey MultiXT system for sound correction.

I have Roon running on the basement PC and I set up an endpoint for the bedroom, with settings as follows: 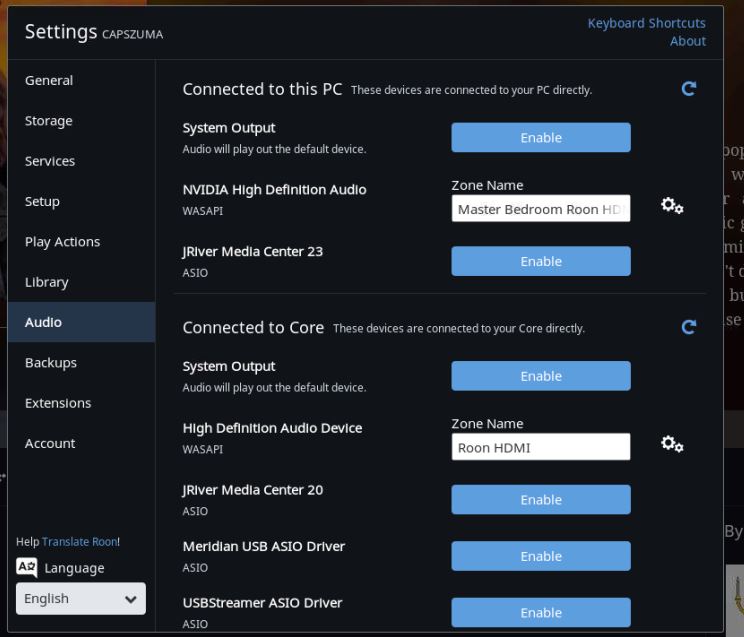 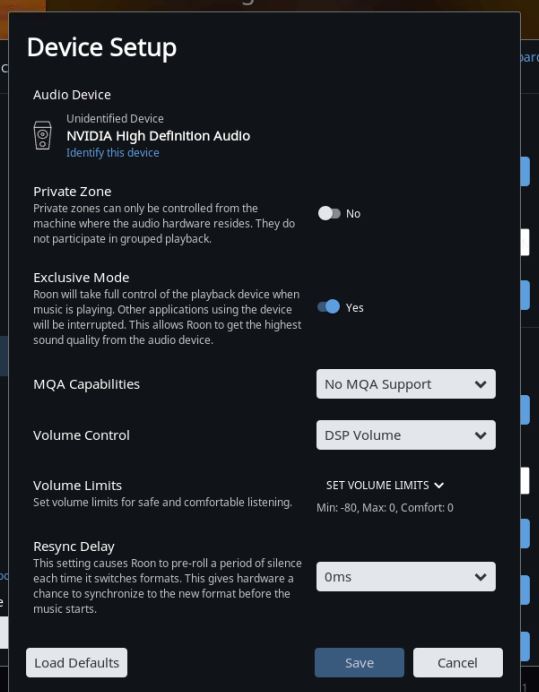 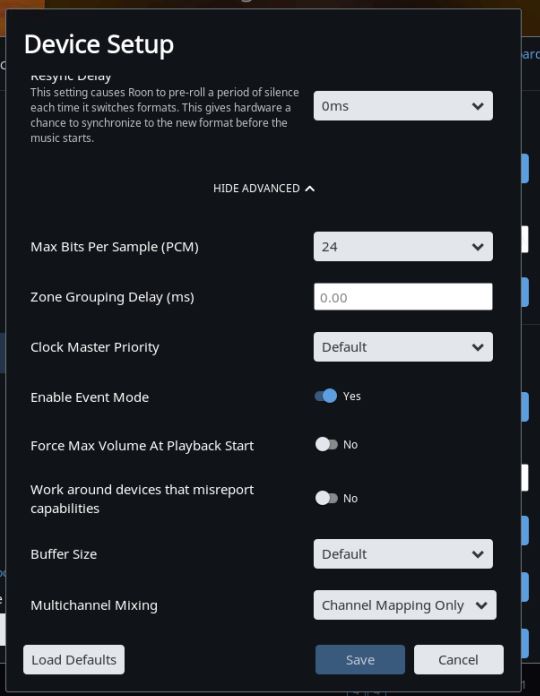 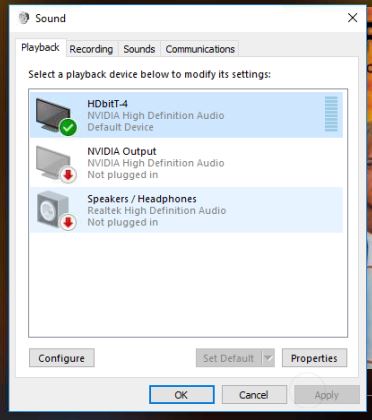 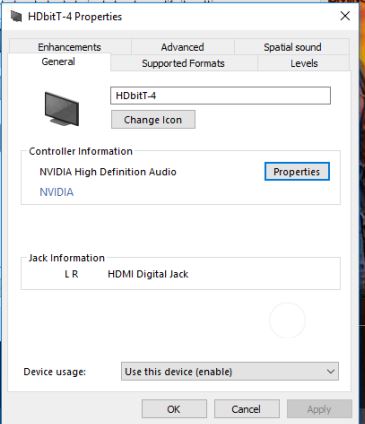 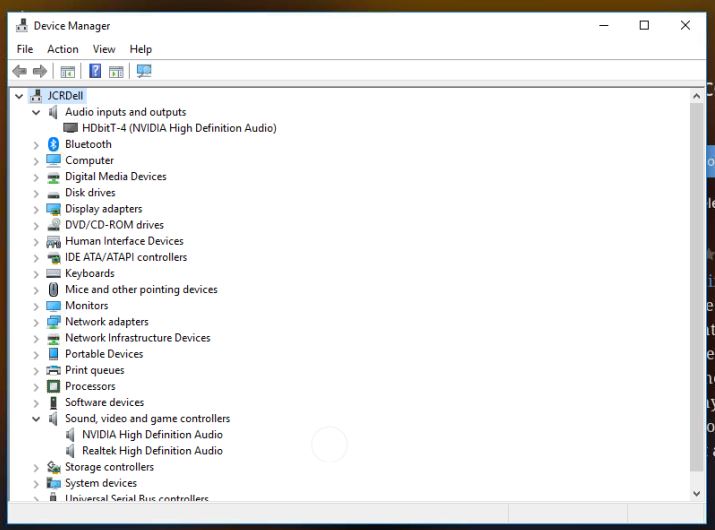 The result? The basement PC endpoint is apparently operating and can see and decode DSF Multichannel files, but they are being remapped to two channel and the sound isn’t coming out of the bedroom array. In fact, I can disconnect the HDMI cable from the Marantz pre/pro in my bedroom and Roon continues to play out through the basement PC endpoint. 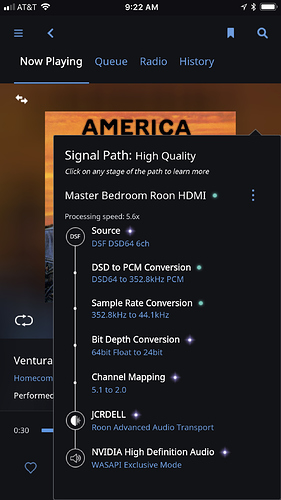 But where is it playing out to? And how do I route it to the bedroom array?

Note that the Monoprice devices only support HDMI 1.2, but that should be good enough for even DSF material.

Have at it, crew. JCR

It’s interesting that your Device Setup screenshot is missing the Channel Layout selector. There are also other differences with what I am seeing on my HDMI zone setup: 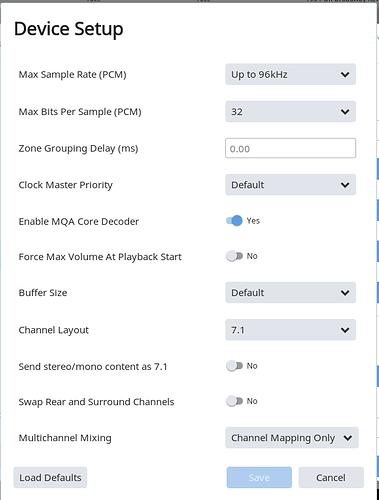 Something is telling Roon that your desired endpoint is only two channels, I think?

I assume that the Supported Formats tab on the Windows HDbitT-4 Properties is showing multichannel support?

According to the screenshot below, the HDbitT-4 is only reporting two channel capabilities to the Windows device manager. I have not dealt with this device before, so I may be getting some details incorrect here. Usually, an HDMI receiver device reports back to the sender device it’s capabilities during the initial handshake using EDID. Most likely, the Monoprice unit is reporting via its EDID that it only supports two-channel audio. 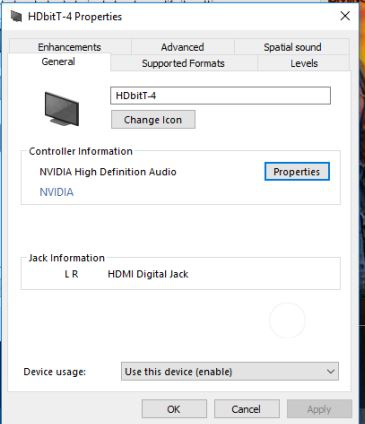 Hello, @Geoff_Coupe and @john. Well, here are screenshots from two other HDMI multichannel endpoints in my home. 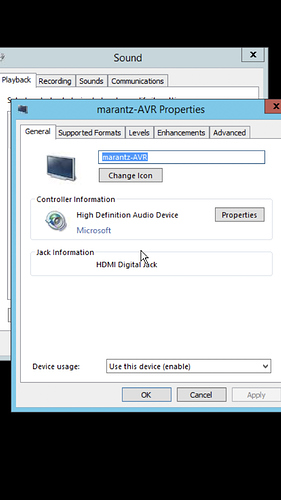 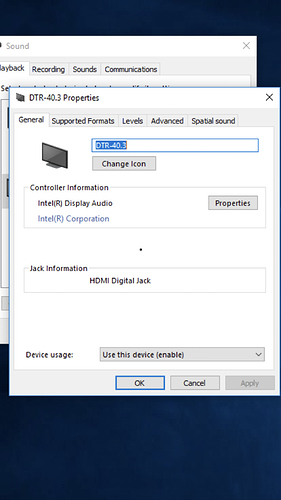 You are thinking that the L R reference is HDMI 2 channel whereas silence is multichannel? Or is the L R simply to indicate that the sound card in the basement PC is only 2 channel, as it is.

And @Geoff_Coupe, the audio settings in Roon for my two other working HDMI multichannel endpoints only show what you see above. I have the greater detail you show on my USB multichannel endpoint — a miniDSP U-DAC8. So, I believe there is nothing unusual about how Roon is showing the HDMI endpoint based on my home experience. JCR

Please check the “Supported Formats” tabs (as I asked). That will tell us whether Windows has loaded the multichannel support in the drivers. Thanks.

@Geoff_Coupe — ahem, I did not know that supported tabs existed.

Well, here we are: 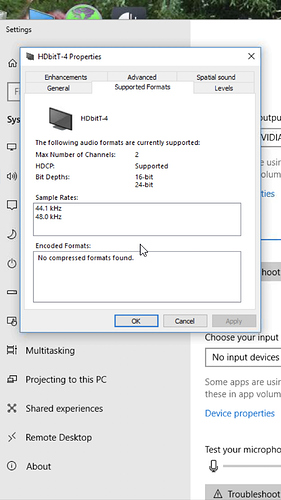 I assume that is the limitation of the Monoprice extender?

In comparison, my living room PC is direct HDMI connected to an Integra DTR-40.3, and we see: 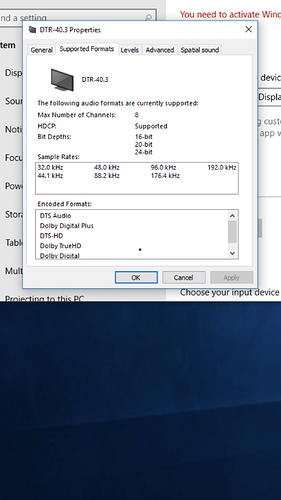 Even my miniDSP U-DAC8 via USB reports: 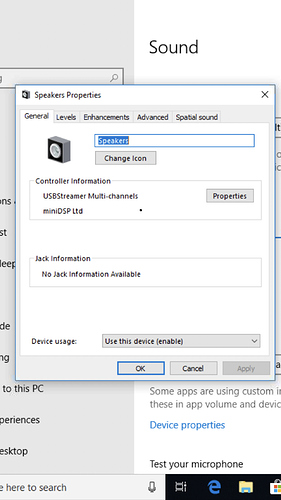 So, I would need to replace the Monoprice extenders with something like this from Just Add Power? 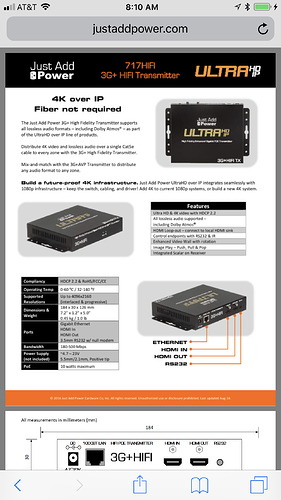 A followup question, @Geoff_Coupe. I spoke with an engineering specialist at HDTVSupply (they carry JustAddPower products of the sort pictured above) and he said that my issue is not the HDbit-4 network — even at HDCP 1.2 — but rather is that the video card, being an NVidia GeForce GTX 745, is what is not supporting the high definition audio. Would you agree with this? I question it as the NVidia site has a chart for which HDMI audio format do NVidia GPUs support. For “GeForce 600/700/Titan” (and I assume the 745 card I have fits here), it shows multichannel 7.1, LPCM up to 24/192 lossless uncompressed.

So I am now confused as to what is the fix. Thanks. JCR

Well, I’m no expert in these matters, but I really doubt that the video card is the issue here. My bet is that if you were to connect it directly to your AVR with an HDMI cable you’d get multichannel support, and Roon would see it.

You definitely have a complicated signal path. I don’t have any experience with a system like yours but I do have some of the same types of components as you do and I will offer some recommendations. You do know that HDMI is not intended to be used in a multicast topology? The HDMI handshakes are intended to be one source to one destination. I have a couple of splitters and they are really intended to work with either identical destinations or destinations with identical capabilities. This is because during the initial HDMI handshake the source is asking the sink what its capabilities are. If there are destinations with different capabilities then you will have to consult with your splitter to determine how it chooses which port to derive the EDID capabilities from. I recommend that you disconnect the multiple HDMI sinks and see if you can get one at a time to work. If that is successful then it is likely that your problem is how your splitter is choosing which EDID information to use.

I also have a ROCK that is a multichannel endpoint for HDMI. This feeds directly into my pre/pro. Sometimes when the HDMI handshake get messed us I will see the same 2 channel and <= 48 kHz sample rates. I resolve this by some how getting the HDMI handshake to reoccur. I can reboot the ROCK or sometimes switching the pre/pro source inputs will reinitiate the Handshake.

Both observations suggest that what you are seeing could be caused by the HDMI handshake getting corrupted. Again I recommend you try isolating your configuration to one destination sink and see if you can get things working.

Hello, crew. Time to give you all a final update on what I’ve done to resolve the issues.

I determined that, indeed, the bitpath HDMI to Ethernet extenders that I have from Monoprice are in fact limited to 2 channel, 24/48. Direct connection of my Marantz AV7005 prepro to my basement PC showed supported audio up to 8 channels, 24/192.

Consultation with both the local distributor for Just Add Power and a local installer for them I know confirmed that the JAP product would support 8 channels, 24/192 to extend HDMI over Ethernet across my network. However, the JAP product requires a managed switch and, as I recall, such a contraption is incompatible with Roon. And how to integrate a managed switch with an unmanaged one is a bit over my pay grade. In addition, I’d likely spend $1,500-2000 for the components from JAP to do this.

I did find some other less expensive extenders online that appear to be workable, but, in light of all of this, I went a different direction.

Instead, I decided to create separate endpoints for multichannel for the three remaining surround systems in my home. In my den, I already had a PC that I have been using for USB out to my miniDSP U-DAC8 into a Sherwood R-972 receiver. Because further testing of that PC confirmed that the HDMI out from the motherboard was not functioning, I bought a $40 MSI/NVidia graphics card, installed it in this PC and ran HDMI out directly into the R-972. Supported audio is 8 channel, 24/192. The R-972 has the Trinnov processing within via the HDMI input and, in 3D remapping mode, it indeed virtually raises my center channel speaker (below the TV) and my surround speakers (sitting on end tables) to the same ear height as my KEF LS50 front speakers. Although the R-972, being rather old now, downconverts multichannel DSF to 24/44.1, it still sounds very good. So, endpoint one done.

For my porch, I moved the miniDSP unit there and bought a $129 reconditioned Dell i-3 PC from my local Microcenter. Indeed, it supports 8 channel, 24/192 with the miniDSP. So, endpoint two done.

Finally, for our bedroom, I acquired a second of the $129 PCs to support my Marantz AV7005 as output to my Marantz SR5000 receiver, now acting as only 5 channel amplifier. Again, 8 channels, 24/192, is supported. Endpoint three done.

And so, after all of the experimenting, I simply found a lesser expensive way to accomplish my real objective. PS, the Monoprice extenders are still in service to bring audio and video from the basement PC to all three of the endpoints above described.

Thanks to all for the feedback along the way. Happy Fourth! Cheers. JCR

Glad you got it sorted. I was going to suggest going the endpoint route earlier.