I know, there was a topic with nearly the same titel in 2017, but my question goes in another direction as the discussion there.

I#m relatively new to roon and on the way to optimize my music library to work best with the roon concept of music selection. I converted my SACD iso’s to dsf and now have twice as much tracks as a normal CD. This is not known by the roon recognized discs.

How do you organize your discs regarding Multichannel SACD? Is it better to split it in some way in a multichannel version and a stereo version?

I would like to hear your experiences, what works best for you.

Put stereo and multi in two separate folders, then Roon has a chance to identify them.

And label them as stereo and multichannel, respectively.

For me it’s better not to rename the title, but let show roon the format.
So you can choose the album versions in an easy way.
For a SACD I’ve three versions: DSD 2.0, DSD 5.0/5.1 and CD.

I have asked Roon if an faq could be created for DSD naming for library storage.
So far I have run across 2.0ch, 6ch, 1.0ch (mono). Have some 8ch PCM as well.

What I did for an example:
Jeff Wayne’s War of Worlds two disc SACD the underscore is 6ch. The next two photos show into directories further. Roon will show format information if you turn it on.

Why would you do that?

I would do this:

This will give you multiple versions of the same album but separated by track types.

For this specific SACD I had to use disc 1-4 as Roon already had it like this, the track listing is wrong on disc 1 and 2 so splits album see screenshot. For disc 3-4 the multi channel version it shows properly.
SACD rips are handled different from album to album hence suggesting FAQ. Doesn’t matter to me what is chosen as long a way to do is considered universal. You can select “show format information on albums” then Roon shows DSD64 for stereo and DSD64 5.1 for multi channel.
Still waiting for support to fix track-listing so DSD64 lists together. Been using Jriver to listen to rip for 3 weeks. You can see my posting in support for further info. Seem to spend much time having SACD’s display properly hence using Jriver instead. Frustrating when your metadata is correct yet unexpected results occur anyway.

You didn’t have to do anything…

I would still make them separate albums. Why would you want them as operate discs instead? SACD rips work great in Roon but you, the user, have to give Roon a chance to get them right when you have stereo and multichannel versions. I think you are just making things hard on yourself…

Have a look here what else should I do to get the disc to show correctly. Already a month old still not fixed.

I rip album ensure metadata is correct before adding to Roon Library yet albums show as split listings, there is no procedure on how to do this so what should I do to make it easier? A free mpd linux client or Jriver shows the same files correctly as separate albums, different formats as the Metadata is correct.
@volschin agreed 100% best practice, FAQ, procedure would help in these matters.

PS I am beginning to cringe when I add music to my library as it always seems my favorite albums that I really want to listen to and read about split for whatever the reason.

I use a stereo directory and multichannel directory. Roon sees these as duplicate copies of the album but under “version” its easy to identify the 2-ch vs. multi-channel copy. 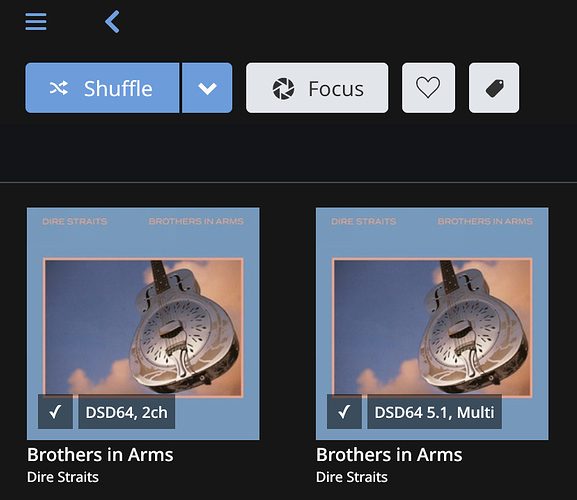 Yep…that is what I said and showed earlier…

Copy those directories to your “Jeff Wayne” directory in the directory Roon is watching.

I originally ran all my MCH SACDs through Musicbrainz, and generally Roon does a great job with them. Maybe this will help:

read the provided link.
had you checked you would notice in screenshots that Roon has one track listing for multi channel and a different track listing for the stereo files.
Great you are trying to help, make sure you read others troubleshooting steps first, otherwise you just add to their frustration.
Yes tried that naming convention, yes I have been waiting 30 days for a fix. Now using Jriver on my primary listening device.
Ps
You prove that roon needs to create a FAQ on this everyone has different naming methods

Perfect thanks will try MusicBrainz when I get home.

As thread suggests there should be a procedure or FAQ to address this, I find many problems with both SACD and PCM 2ch and 6ch files. Also box sets and collections even ones that are purchased online which should just work as they are created by studio.

Did you try what I suggested to the letter? Or did you try it after you added the album your way and not remove all the music files and not clean up the database?

Thank you for all your great input. I will put my dsf files in seperate subdirectories and Play around with naming convention of the directories.