Multiple performers listed where only Main Artist should be

Since 1.1 I’ve seen an increased number of my albums have multiple performers listed where only the main artists should be.

See attached screen shot, prior to 1.1 only Motorpsycho was listed and now something that looks messy and not clean. Should not those other performers be listed down in the white area “All tracks Performed by…”, basically those 2 areas need to be flipped.

I know for example the latest Steven Wilson album looks like this, from another post, but I don’t know the reply from Roon. 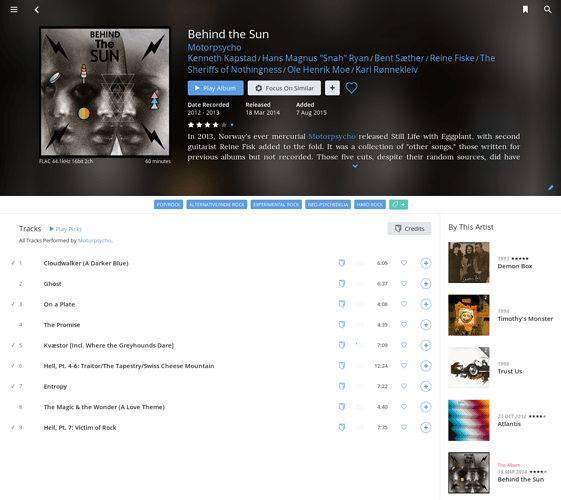 I added the album “Natural History” by Talk Talk and ended up with 3 artists listed I don’t want to see. Am I missing a setting that will just show Talk Talk as the artist?

@cellison
Good find !
I hadn’t noticed this before, but I have found the same entries - my data’s from Discogs where that data doesn’t seem to be mentioned.
And here’s what I see in Roon :-

I’ve posted about this as well. How can I disable “secondary” artist names?

In addition to the two I mentioned, Sufjan Stevens’ 2015 Album Carrie and Lowell has the same issue of also displaying the other performers.

Thanks for the report guys – I can reproduce this issue and I’ve bumped the priority of the ticket in our bug tracker.

We were already tracking this with regards to the Sufjan Stevens album, but obviously this appears to be a bit more widespread than just that one album. We’ll run this down guys, thanks.

Thanks for looking into this. Here are a few other albums that have this issue, which I found by focusing on artists with no images.

Hey guys – we’re still looking into this issue, and I just posted an update here:

Doing this exercise was great as it also allowed me to locate 5-7 EP’s which were identified in my library as some other artist/album from what is actually was.

Mike,
Will someone from Roon be submitting the info that users have already posted about to AllMusic, or do you need us to do it ourselves?

Will someone from Roon be submitting the info that users have already posted about to AllMusic, or do you need us to do it ourselves?

I’m hoping to talk with AllMusic soon about how they’d like us proceed here. If we can help expedite we will, but in the meantime, feel free to report them directly and I’ll follow up here once we talk with our contacts there.