Music Added to NAS Not Updated Automatically in Roon

Thanks guys but I don’t have that option. See here

I honestly don’t know what that is, but this is what my storage looks like. Next to \diskstation\music, you see 3 dots.

What is ‘Mediaward’, where I see Roon Core Kit? 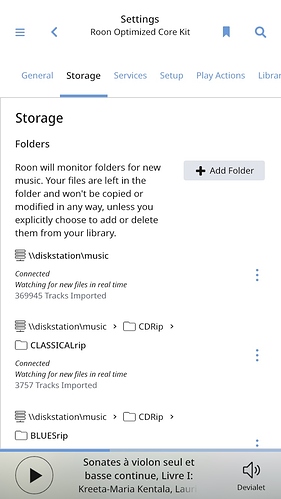 I’ve moved your post and replies to a new thread.

Thanks BlackJack and in Linux I have the SMB share for my NAS mapped to a local folder hence maybe why that is why Roon thinks it will do an immediate scan upon detecting changes.

Thanks Patrick_Van_Osta - Mediaward is the name of my host PC. Also I believe BlackJack may have solved the riddle

Hey there!
I don’t want to bring some sad news, but it’s been reported for a long time, that Roon has issues with storing database on NAS. On top of that, NAS doesn’t provide that fast speed for picking up files and has issues with gapless playing. It’s not that much of Roon limitations, rather than NAS protocols.
I’m not saying storing music for Roon on NAS is a bad choice, all I’m saying there way better options – including internal storages of Roon Servers, SSD and SD card with adapters

Hi, I’ve read that it is possible to install a Roon Core on a Synology NAS, but need help in how to set it up. Can anyone please advise on a fairly easy way to begin? I appreciate any advice! Thanks…

That is certainly not my experience on either count, and I don’t have a particularly zippy NAS (Synology d214play). Gapless works absolutely perfectly and speed has never been an issue (library of 24,000 tracks). The only downside is that it does not automatically pick up new albums added to the storage, but as that’s maybe a couple of times a week it’s certainly no biggie.

The automatic re-scan interval is a workaround in place for the fact that real-time watching mostly fails for network shares. If you mount the network share on OS level and present it to Roon as local storage doesn’t make real-time watching work and as Roon believes that it’s using local storage, the workaround is also not present. So you may have to use the manual re-scan every time to update the library in Roon.

IMHO, Roon works best if you do everything possible to help it work best. I would always install a large enough SSD in my Nucleus, NUC, or computer to house all my music files.

From a technical standpoint size of the library doesn’t matter in this case, what matters is the architecture of the NAS storage - RAID, non-RAID, RAID 0 or RAID 10, is NAS in sole use of Roon, or other system is draining the unit – such as Plex, for instance. On top of that, if your router has issues or had been previously troubled with such protocols as UPNP (even though Roon uses it’s own proprietary RAAT), there is a huge chance of potential issue.

I’m not arguing with the fact, that you system works perfectly and I’m glad it does. The problem is that YMMV from what the majority or at least some about of users currently or used to have. And as I’ve pointed out previously to the link above, there are better and more efficient ways.

I’ve had Roon for several years, and I used a Synology NAS for music storage until sometime last year. The two main issues with the NAS setup were that, as reported, the network share protocol does not propagate NAS updates automatically, and in general slower local music search and retrieval at the start of an album. Since my local collection has a moderate size (1700 albums, 1.1TB) and I have full control over the ins and outs of the NUC running Roon Core, I moved music storage to a 2TB SSD on the NUC. As a Linux geek, I’m happy to download or rip new music to the NAS and then rsync it to the NUC SSD. Not any more convenient than asking for a Roon rescan of the NAS after adding music, but performance is significantly better, and I’m sure I have two copies of everything just in case (I also do cloud backups for the Roon library and all downloaded music, and HD full backups of the NAS to be safer).

There is a degree of ‘it depends’ here. I’m using NAS storage, configured as network share, and Roon picks up changes immediately. Sometimes too immediately. It’s an old drive and it’s slow - when copying in a new album, Roon will occasionally identify a partial album and I end up with tracks split across that and several ‘unidentified’ albums, followed by fun with the merge tool. If I remember in time I’ll disable the storage/copy/re-enable.

Why? Don’t know. Maybe because it’s using an old protocol.

copying in a new album, Roon will occasionally identify a partial album and I end up with tracks split across that and several ‘unidentified’ albums

If you use RAID, NAS splits information between two or more physical HDDs you have, that’s why it might initially show like that.

No RAID here. I think it’s likely that Roon has ‘identified’ the album when only some of the files have arrived, and then gets confused…