Seen this issue a couple times now. Looping (spoiler alert) in @support to figure out what is going on here.

The dac is a Totaldac d1-dual attached directly to the Nucleus+ via USB cable.

The local network is 1Gbps ethernet. Everything is wired with cat6 cables to a Linksys LGS108 switch, which is in turn hooked up via cat6 cable to a Linksys EA7500 router. I have a 1Gbps internet subscription.

I often have a single track in the queue being played over and over again (loop single track). When I’m done with listening, I simply turn off loop by clicking on the toggle button and let the track run its course until it’s done.

I’ve noticed on 2 separate occasions that the track keeps on playing, even though the queue is empty and Roon indicates that nothing is playing. The expected behavior is obviously that my dac does not play the track.

The last time, the track being looped came from Tidal. The first time I dare not say. The queue screen when the issue occurs looks like this: 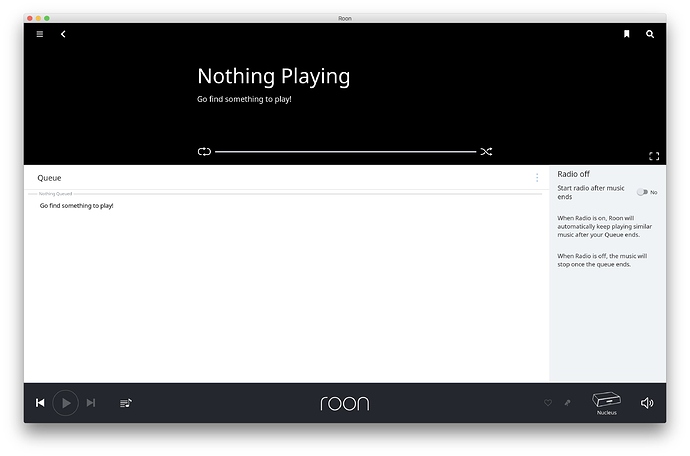 The only way to stop playing the music, is to repopulate the queue with a track and play / stop it.

Hi @Nepherte ---- Thank you for the report and sharing this observation you have made with us. The feedback is always appreciated!

Before responding to your post I wanted to give this a shot on my end to see what I could come up with. So I did the following:

Findings:
I let the same track (“Omniverse” by Greydon Square) play on loop for 3 hours periodically making sure that it was still running. At the three hour mark I clicked the “loop” button off from the “queue” screen as seen above and the track ended as expected with nothing continuing to play afterwards.

Thanks @eric for the follow up. I believe I toggled the loop button shortly (matter of seconds) before the track ended. So it might be some sort of race condition. I’ll see in the next few days if I can reproduce this more consistently.

@support Just to let you know this happened again. I had 1 track (containing 2 parts) in the queue: Arsenal - Saudade (pt. 1 and 2). Somewhere in the beginning of the second part, I turned off loop again. After the track finished, it started playing again. The screen indicated nothing was playing, but I can assure you, it was 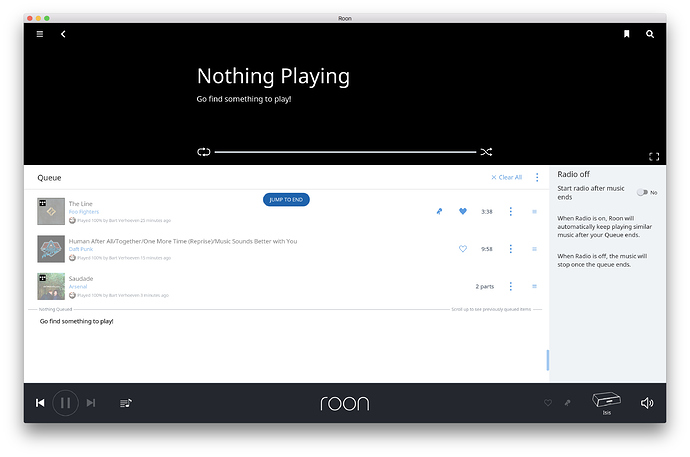 Hi @Nepherte ----- Thank you for the update! The continued feedback is appreciated!

I am going to schedule some time to bang on this a bit to see what I can come up with but wanted to check first to see if you can reproduce this on B334 as well.

@eric: I can confirm this also happens with B334 (forgot to mention I have upgraded). Oe more change related to my setup: the Totaldac is no longer attached directly to the Nucleus+. It is now hooked up to a microRendu.

Thanks for the insight @Nepherte, very appreciated!

As mentioned, I am going to do some quick testing to see what I can come up with on my end. Once I have completed my evaluation I will be sure to share my findings with you asap. Your patience during this process is greatly appreciated!

Hi @Nepherte ---- Thank you for your patience! I have had some time to “bang” on this using the steps/feedback from your previous post and still I am unable to reproduce.

Since your last post have you tried any of the mentioned troubleshooting exercises? Just curious as to what the outcome was.

@eric Thanks for looking into this. I have not had the time yet to look further into this yet (and it doesn’t appear that frequently anyway). My system didn’t get a lot of playtime this week as I just got married

Thanks for reaching out @Nepherte, very appreciated and congrats on the wedding! Wishing you and your partner all the best!