Music just stop playing on the next song. Clicking pause no response. Click next then previous buttons, another song appears but still won’t play. 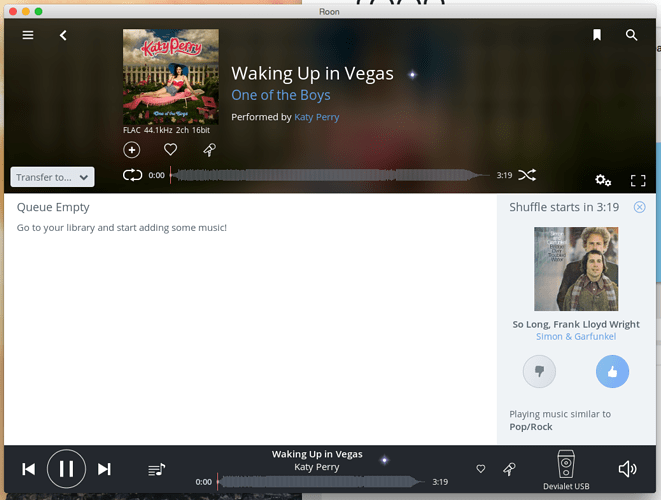 The REMOTE node stops playing after 15 to 20 seconds regardless of the type of music or bit rate. This occurred with Hires music in build 3 but stopped by build 8. But it is now back with build 16 with all music on the remote connection.

Hey @rpadole – what kind of output are you using on the Remote? System Output? Or something else?

I have the same thing occurring playing to a Meridian MC200 endpoint. All of a sudden the music stops playing, irrespective of whether its local or from Tidal. I can move from track to track and still alter volume levels, but no music plays and no movement from the timers.

It works fine if I quite Roon and start it again.

The Remote is using SPEAKERS (in this case Meridian Explorer2 USB DAC). System Output is Disabled.

I’m using Devialet USB which I think is a standard driver.

Any update on this? I’ve just installed Build 29 and I can’t play to Meridian endpoints at all at the moment. Same symptoms as above. Everything fine to the local system output.

@thompo – are you running a Meridian Core on the same network?

We are talking with Meridian and waiting for word on when Roon might be able to run on the same network as Sooloos. For now, you will need to turn off your Meridian System Core in order for Roon to stably stream to Meridian zones.

Switching off the Meridian core has resolved the issue. Interestingly, they have been working together most of the time until the recent Solos update.

Thanks for helping me out

Great, thanks for letting us know!

We’re checking with Meridian to see what changed in the most recent update, as we’ve heard this from a couple of users in the last few days.

Happens with Tidal, CD rips and hi-res audio files. Will play for up to 60 secs and then stop.
Anyone else?

Hi @rpadole – sorry you’re still having issues here. Can you give me a little more information about your network (as described here)?

The symptoms you’re describing are consistent with the network failing to deliver the stream to the remote fast enough, and we had 2 users with similar issues last week resolve the issue with a firmware update to their routers.

It was surprising that router firmware would have that kind of effect, and we’re looking into the issue, but I’d like to rule out a network issue for you first, then we can do some additional troubleshooting.

Thanks @rpadole – looking forward to getting this stable for you soon!

Synology DS713+ connected via 2 bonded 1Gb ports (2000Mbps) to Netgear ProSAFE GS752TP (48port) switch.
The only router utilized is the AT&T provided Motorola NVG589 using s/w ver. 9.1.0h12d34.
That router is connected to the Netgear switch via Cat6e cabling. No WiFi is utilized from the Motorola router.
The REMOTE Roon is connected to the network via CAT6e cabling to the Netgear switch and is running on a Falcon Northwest Tiki with an Intel Haswell-E processor.
The Main Roon installation is running from an MS Surface Pro 3 connected via WiFi to an Aruba Networks IAP 225 using 802.11ac.

Hi @rpadole – I’m still looking into this, but wanted to check in.

Unfortunately, we’ve seen huge variations in performance and stability from these types of cable-company-issued routers, and have traced a number of issues back to their performance. Obviously, we’ll work with you to troubleshoot this issue, but I can tell this class of equipment has caused issues for others, so it may be worth a look.

Other than that I would advise you to look into other networking configurations, even temporarily, to see if things get more stable. While 802.11ac should easily be fast enough to stream (I’m doing it right now), I’m wondering if there’s anyway you might try running your main Roon install wired? I know the Surface doesn’t have an ethernet connection, but again, it would be interesting to know if things are more stable with wifi out of the picture, just for troubleshooting.

A couple other questions for you:

If you’re still having issues @rpadole, send me a PM and we’ll gather some more information. That’s a solid network you have there, so I’m sure we can figure out what’s going on.

Really sorry for the inconvenience!