after my first “Roony” (a zotac zbox nano id65) died, I’d decided to built up my first own Music Server (Roony II)

My requirements: noiseless and suiteabel for the living room.

And here you can see the result (not at the finally Location in the rack): 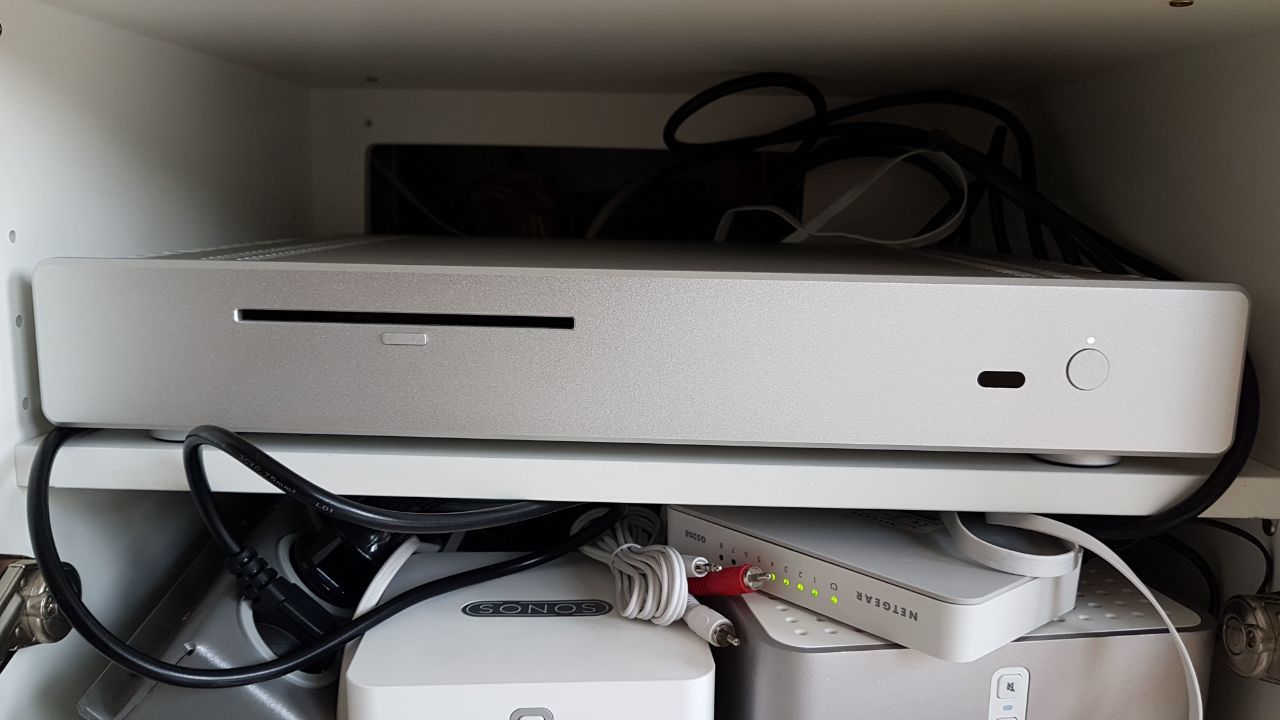 It works very well: totally noiseless and lukewarm while streaming HIRes music. And - yes, I’m a Little bit proud of my work.

Nice, its always better when you do it yourself

I did this a while back and have yet to update it…maybe I should.

Ill kick this off… seeing as some are asking Streacom make some nice fanless cases…but your typical thermal range maxes out around 95W so that limits your CPU choices. Im currently using i5-6500 with FC8 case and pico 150 power supply. Asus H110 Mobo and 16GB ram and I can use Roon 1.3 DSP upsampling to DSD256 at 1.1X without any drops that I have heard - Core and USB ASIO R2R DAC on the same machine. http://www.streacom.com/products/fc8-evo-fanless-chassis/ [image] …

Thank you for moving it to right category

btw: for me it is a Audio Product

That’s a really interesting build @Armin. I think it will be a good match for some forthcoming features in Roon. Multicore processing within a zone and native DSD 512 upsampling. Brian is aiming at increased efficiency to bring DSD 512 to a wider range of hardware than has been the case in the past. I think your build will sit very nicely in that space.

Hi I am quite new in music servers and I am not really a geek in computers but I love to experiments and makes things on my own.
I would like to build a music server as Armin did; I was thinking to buy Fidelizer Nimitra but then analyzing better the offer I think that doing a music server by myself will be in the long run the better choice.

Regarding the HW I was thinking to get::

I followed the indications on Armin but I am not sure regarding the compatibility of the SSD and the motherboard and the case.
Is it ok? I am afraid to order all the components and then get a bad surprice…

Regarding the configuration of the server do I need just to do a windws 7 install and optimize it for audio?
Thank you for your help!
Maurizio

Hi I am quite new in music servers and I am not really a geek in computers but I love to experiments and makes things on my own.

It may be easier to start with NUC7i5BNH with Akasa Newton S7 as described here:

The transplant operation went well, I think. The NUC7i5BNH motherboard is now in the Akasa Newton S7 case. It all seemed straightforward. I used the thermal transfer pads supplied in the Akasa kit - in the video that Marius posted, the guy said that he eventually used thermal paste for better heat transfer properties. That may well be more efficient. The CPU in my Akasa is running warm @ 50 degrees C, but it’s well within operational limits I believe, so I will probably keep it this way. I us…

You can use ROCK - no need for Windows.

Thank you!
I was thinking about get me the Namitra HW (https://www.stereo.net.au/forums/topic/126194-fidelizer-nimitra-audio-server-whats-going-on-here/) from aliexpress (https://www.aliexpress.com/store/product/Mini-PC-Windows-10-Barebone-quad-core-celeron-J1900-HTPC-OpenELEC-Kodi-Supported-windows-linux-Android/109426_32425706564.html?spm=2114.12010612.0.0.KMVjrJ) and the component that Fidelizer installed:

Then install windows 7 or Rock (I don’t know it at all) and install:

There you go! I guess…

…and of course Roon!!

What do you want Asset UPnP for? It’s a DLNA server…

What do you want Asset UPnP for?

Regarding the capabilities of the Celeron-based device I trust you but it seems this Namitra (the same HW) works also as Roon core quite successfully… and you pay for it 1350 $!! While I just spend 300$… so it is very tempting… the rest is just my trial and error and some headache… that I guess is worth 1000 $!! :-)

The minimum requirements for Roon are here. Of course, there are a number of factors that influence hardware requirements, such as the size of your library, and whether you want to use DSP for your Roon endpoints. Personally, I won’t consider anything below an Intel i3. That’s what I started with, but now I’ve built a fanless Roon Core server using an Intel i5, so that I’ve got room for the expected future expansion of my library and system.

whether you want to use DSP for your Roon endpoints

What does it mean?

Actually my library is not really huge and this is just a first step into to audio computing world. Nimitra has got the same processor (Celeron J1900) and has awarned a lot of prices as super audio computing system…
Surely windows it has been optimized for audio performance but you cannot trick HW so I guess it should be enough for the next 5 years, considering I don’t think to have ten times my library… and in any case what I care is how each song is played… the processor must be able to process just digitally at bit rate the song then I jave a DAC and the amplifier/speaker that does the rest…

OK, so it sounds as though DSP is not of interest to you, and with a small library, you’ll probably be OK, but just be aware that the Celeron is below the minimum recommended by the Roon team.

Thank you Geoff for your feedback, actually I am very basic in my knowledge… what services is supposed to offer a DSP?

DSP = Digital Signal Processing. Roon has a DSP engine available in the server, which can be used to manipulate the audio in a variety of ways. Follow the link to read about it.