I was about to buy a NUC but in the end I decided to build a passive cooled HTPC old skool style by assembling all the parts using HDPLEX cases PSUs and a Thin-mITX form factor. It needed to be low power but powerful enough to run Rooserver and run concurrent media programs, have a long life and an option to upgrade everything, also be compact, silent, you could grab it and take to a friends or on holiday. Run off a power brick or an iec wall socket. It needed to have a shed tonne of secure storage and grunt to play high bandwidth audio files, 10bit h.265 video in software (in Linux via VAAPI) if need be, integrated power supply, sit unattended for months, digitally and wirelessly connect to my Devialet, USB audio out would be ok too and space to add an internal USB-powered SPDIF converter.

Total build cost was £720.33. Downside is you need to collate the stuff and build it; the upside is lots: The HDPLEX case is an absolute joy to work with and it’s so well packaged and looks sleek and minimal — NUCs are a bit ugly, functionally: a base 8GB i3 Mac Mini starts at £699 but has half the SSD and does not nor never will have 8TB HDD, its i3 CPU is a M series of the same version —comparable but limited and non-upgradeable, Mini has a fan so is not truly silent. I want to run a fairly stripped back Linux without a desktop running Roonserver, Transmission and just enough x11 to support Kodi 18RC5. Every part of the build is upgradeable and replaceable. with space and power for two more internal hard drives. I don’t want a NAS as I think it’s not that usefulness when rsync sequential (changed files) set up as crontab jobs will do me just fine. 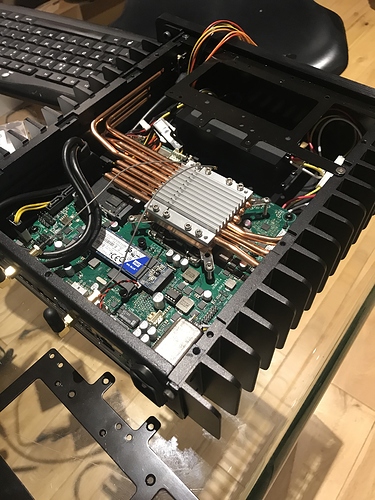 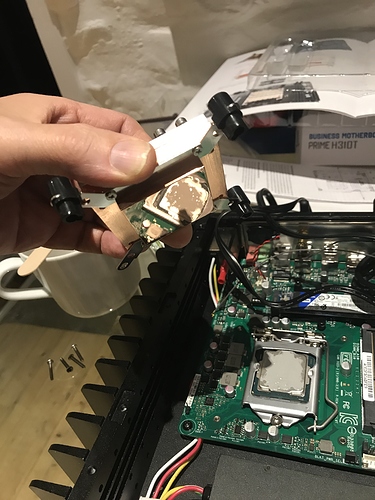 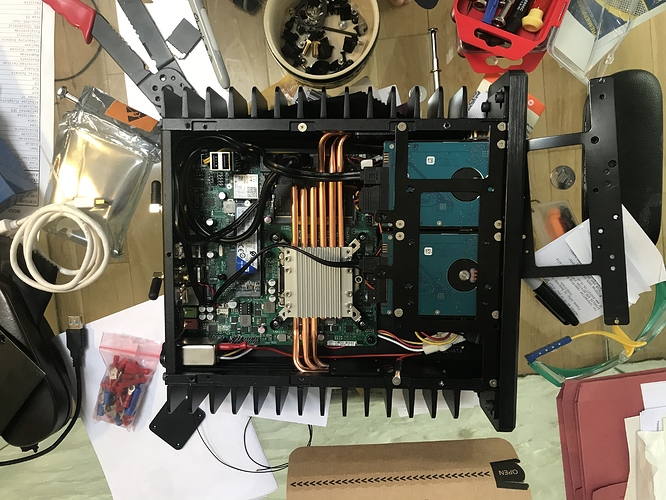 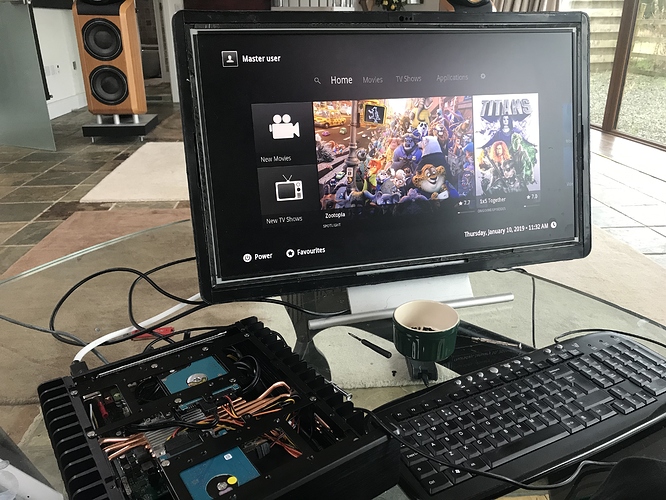 I doubt I will need to do much to this for a very long time… it’s tucked away on a spare shelf under the record player — a shame to hide it really. 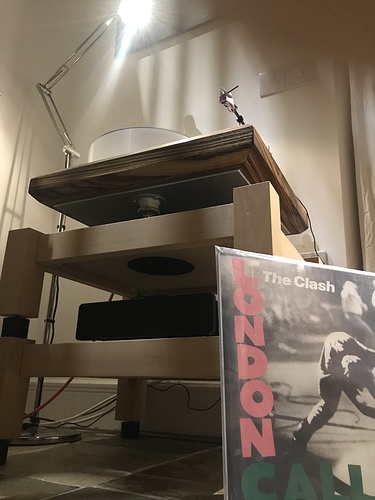 It’s a great feeling when you get the motherboard seated and all the components assembled in the case, and you actually see that motherboard posting graphic!

Many people think building computers is too complex, but I really think it is easier than trying to shop for the perfect one. And usually cheaper, too.

Agreed, I’ve only once bought a preassembled PC.

I don’t think I’ve ever bought a pre-assembled PC. Pre-assembled laptop, yes. Although, I once had a user upgradable Asus laptop which used a desktop processor. The heat pouring out of that badboy was intense.

Anyway, it’s looking great. Did you give Audiolinux, Daphile, or Snakeoil OS a shot for the OS? Or a mainstream distribution?

I haven’t assembled mine yet, but I went the NUC7i7DNHE route, Intel 112Gb 800P SSD for the OS, and an Akasa X7D case. The CPU isn’t upgradable like yours, but it’s fully silent and has long term support from both Intel and Roon, so it should also do well in the closet for a few years. I have to go with a NAS, though, which makes me envious of your non-NAS environment. The Akasa does have space, but not enough space.

Beautiful pictures and the HDPLEX cases are great.

Yes 2.5” models 15mm depth not as problem as clearance to heat sink is fine and not much heat at all is generated… it runs cool…

That looks lovely July, but there’s more chance of me flying to the moon than building it, let alone getting it to do anything.

Are there people who can do the clever stuff for a modest fee?

Yes many towns have a place that builds pcs for you.

I live in a little village called London. On the other side of the village is the metropolis of Tunbridge Wells with a business that sells/makes these things, including a Green thing from the USA which is a grand with an external psu and it looks idiot-proof.
Roon may get my $500 but possibly not the Nucleus £1,500 and their psu is another £600.

Congretulations. It is looking very well.
I have build one myself around 4 years ago, with an i7 and a small SDD card only for the OS. My music is streaming or through a NAS, so I didn’t need the harddrives.
I happily use Audiolinux as OS. The machine is running for 4 years without any issues, very reliable.
You will have great fun with it.

Great build! I cannot tell from the pictures or your text, did you install the PS internally?
Thanks

Yes it’s an 80W slim form PSU fitted to the front of the case under the front HDDs… Though it will also take an external if needed.You can see the edge and corner of it in picture 1 and 2.

btw: what are the stubby, low-profile wi-fi antennas you used?

There are plenty of them on eBay. If you search my posts you’ll see l had some of my roon endpoint headphone stands I built a year or two back using these, they are the same. I just had excess for the the WiFi card. I don’t really use WiFi on the server — but is useful on occasion.

It looks stunning, thanks for sharing the pictures with us

Congrats on the build – looks fantastic!

Yes it’s an 80W slim form PSU fitted to the front of the case under the front HDDs… Though it will also take an external if needed.You can see the edge and corner of it in picture 1 and 2.

Are there an advantages to using the external power supply with this setup?

Hello,
I am thinking of replacing my Mac mini with a custom built HDPlex like you did (great work by the way). A few questions:

I can’t answer the first two questions but I’d really not worry about the noise from HDD issue. If your using onboard audio (unlikely) or a direct core to DAC USB connection it’s theoretically possible but my belief is this is a non issue in reality.