My Roon does not play local files anymore

Speakers of Mac via Roon for Mac.

After weeks of fun playing local files and Qobuz music, suddenly I cannot play local files anymore. It looks like they play but the play time does not move: 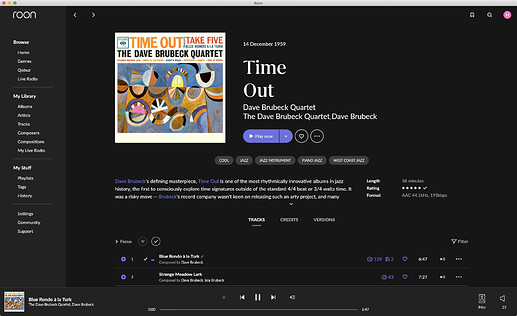 I still can play Qobuz music if I haven’t tried playing local files before that. After I attempt to play local files, nothing plays anymore. I have to quite the Roon app on Mac and start it up to get it playing again.

Roon on Mac can see the local files: I still can browse my local music, but I cannot play it.

Actually I found the problem:

The file share on the NAS where the music files are wasn’t mounted on the Mac. So the music was there (and can be accessed on the NAS) but not from the Mac. When I mounted the share it all worked again.

Two things seem strange to me:

Can you post a screenshot of Roon’s Settings > Storage screen? Thanks. 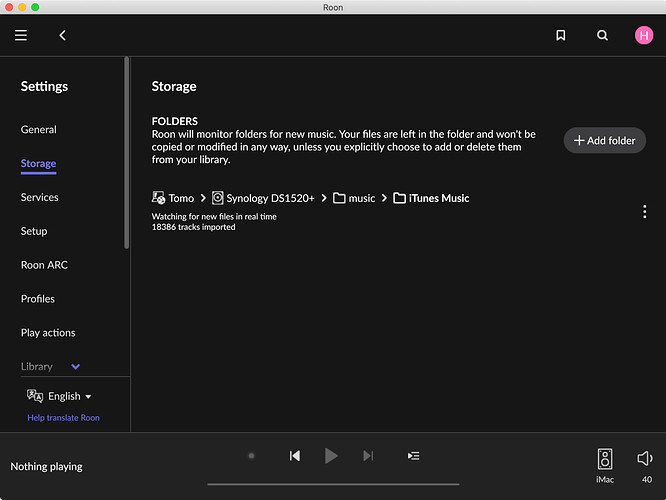 So you have defined the Watched Folder in Roon to be the Synology folder mounted on your Mac, as far as I can see.

Thanks. So you mean I add the Unix path to the music folder as it appears on the NAS itself (something like in my case: /volume1/Welten/iTunes Music/)?

No, that’s not the correct form for a Network Shared Folder. Please have a read of this article:

FAQ: What's the best way to configure my NAS for Roon?

If your media storage or backup location isn't directly connected to your Core machine, you'll need to add that location over the network. Whether you're using a NAS, Windows, or Mac machine for storage, adding these locations is easy as long as ...

Were you able to successfully add the network share using the instructions our moderators linked above? The tech team is on standby if you’re still having issues with local file playback.

It’s not possible to use network shares in Roon with Cores running on DSM7 (and higher). If needed, the share(s) has to be mounted by the OS (DSM7) and setup as local drive in Roon.

Thanks for chiming and sorry that I haven’t responded earlier. Haven’t sorted it out yet. Towards the weekend I will have a read through the FAQ and report back.

The OP said that the Roon Core is on the Synology NAS. If that is the case, why are they using a network share if the music files are on the Synology?

Yes, teh Roon Core is on the NAS and the music files are on the same NAS.

Trouble was the following: When I set up the system (from the Roon app on the Mac) it found teh core on teh NAS but asked me to tell where the music is. And that was the moment wheer – I think – I could only point to the NAS music files as a share on the Mac. Does this make sense?

I will fiddle with it again, but don’t know how to tell the Mac app that everything is on the NAS.

Why is this exactly? Asking because my Synology is currently on DSM6.2 and I was thinking about updating it to DSM 7. Roon is on ROCK if that makes a difference.

I don’t have a NAS to test on, but you should be able to select the directory on the NAS without going through the Mac. That makes zero sense to have to do. You should be able to add a folder from the NAS directly. Remember, the control apps running on a Mac, iPhone, or iPad are remote controlling the Roon Core on the NAS.

Roon is on ROCK if that makes a difference.

It makes a difference in the way that your Core is not running on DSM7 – so your Roon Core is unaffected by the changes Synology made to their OS and App /Store) infrastructure. You may have to ask Synology as for why they made those changes if you want to know it. Others can just guess. My guess: they were no longer willing to allow Apps to change the underlying system at will (potential security risks, makes work harder/impossible for the DSM support team).

I manged to connect the music storage directly to the Core on the NAS. Yipee! So now I can listen on the Mac without having the music files mounted to the Mac.

All good now! Thanks for offering help!

I guess I am chopped liver…