Has anyone had fulfillment problems with the online Mytek Shop?

Exactly two weeks ago today I purchased a balanced XLR to 2 1/4” cable adapter for my Brooklyn Bridge, needed for the top end headphones I was planning on purchasing the next day. My credit card was dinged immediately. Now - exactly two weeks later - the Mytek Shop site only indicates “preparation” as the order status.

I purchased from Mytek, because seeing no inication of order fulfillment issues, like backlog, production delays - or God forbid, waiting for a pair to be built - I thought why not support Mytek, vs. vendors reselling the same adapter, or other vendors making competing products? So I made the purchase. To help Mytek.

I’d hoped to get an email of purchase confirmation, as a record of the purchase. Have received none.

I naturally hoped to see some indication of shipping long before now, but have seen none.

I hoped for a reply from Mytek to either of the two comments/queries I posted in their Order Comments page associated with my order, but have heard nothing.

All I have is a pair of fantastic cans that I can’t plug into my Brooklyn Bridge, no idea when I might actually get the needed adapter, and a credit card that wants payment for an item I’ve never seen, and no idea when I will. Assuming I will ultimately see it.

Had I known this was coming, I’d have certainly purchased from a different source.

Thought I should mention this to the community. Be aware.

You might want to check with the Mytek-Europe website, now operated by HEM, the OEM manufacturer of the original BB. I’m not sure what Mytek.Audio (USA) intention is re the support of legacy products, given the bad blood between the two companies now.

Which cans have you got and are unable to run as single ended?

I was also after their Metropolis adapter and thought it was a bit overpriced at 160 USD I believe? Went on to Google and found cheaper alternatives but can’t comment on quality as I decided to keep running my cans single ended. Read reviews online saying difference is not audible really.

As for Mytek and their EU “counterpart” with whom I had a very pleasant experience to be honest and you may want to reach out to them and check if they stock it.

I was missing a screw (ha, yeah, I was missing a screw LOL) for my Brooklyn DAC so reached out to Mytek EU asked if I could purchase it from them, got a reply within hours saying they’re happy to post it to me for free. They even emailed me to say they’ve posted it and gave me a tracking number.

I know it was only a screw worth peanuts to them, but that’s what I call superb customer service.

That’s a great suggestion. Thank you Paul. I still have other options though.

Corpse Cable makes them and sells them. But they are on holiday for another 5 days. And it looks like they use better wire. And there is a Chinese/Singaporean affair on Amazon that makes them for MUCH less. But I’m tired of waiting. And the final option is to just make some myself. I’m handy with a soldering iron, and have all the high quality Cardas solder, silver wire and stuff already. Just need the terminations.

But now I have one more option. Thank you.

Which cans have you got and are unable to run as single ended?

I’m sorry, I did not mean to imply that my cans could not run single ended. They can. They come with two cables. One, roughly 1 meter long, is single ended, and I’ve been using that to listen to them on my iPad with a DragonFly Cobalt. But I really want to hook them up to my Brooklyn Bridge. The cans come with second cable, a 10 foot balanced, with 4-pin XLR termination. So if I want to use the supplied cable - and I do for a 10 foot run - I need an adapter.

In the interim I used the 10 foot single ended cable that came with my now-deceased Oppo PM-3’s, and it did not sound that great. So I’m anxious for balanced - for such a long cable run - and to avail myself of the “double” amplification (not what it’s called, but you know what I mean) that’s built into the BB. And I’ll bet that the supplied cable is a higher quality than the one that came with my Oppo PM-3’s, at nearly 10 times the cost.

The cans, BTW, are Focal Stellia’s. And with just listening with the Roon App on an iPad with a DragonFly Cobalt, they sound brilliant.

And thanks for the additional endorsement of the “other” Mytek.

No worries and thanks for the comments. If you do get it, let me know if you can hear a difference. Would be curious to have your opinion.

Same one is also on Ali Express

Thanks @Raz. From the looks of it, that’s the same exact outfit I was referring to as the Amazon Chinese/Singaporean outfit that makes them. There’s still a long wait, and I’ve been waiting two weeks now. Hopefully Mytek (US) will get moving soon.

What exactly are you interesting in knowing I can hear the difference in? The difference between what, and what, specifically?

FWIW hearing ANY difference is likely real easy with these cans, as they are absolutely, amazingly detailed.

Corpse Cable makes them and sells them. But they are on holiday for another 5 days. And it looks like they use better wire. And there is a Chinese/Singaporean affair on Amazon that makes them for MUCH less. But I’m tired of waiting. And the final option is to just make some myself. I’m handy with a soldering iron, and have all the high quality Cardas solder, silver wire and stuff already. Just need the terminations.

But now I have one more option. Thank you.

Lodge a dispute with your card provider and purchase the adapter elsewhere.

Thanks. I’ve already determined that AMEX is quite willing to reverse the charge. And as soon as Corpse Cable comes off holiday, if they say they can get one to me quickly, that’s exactly what I will do. Thanks for the suggestion.

Right, sorry. Curious as to whether you hear a difference between listening single ended or with the balanced adapter. I may go that route if you say it’s noticeable.

Great cans you have and have read many reviews. Mine are budget friendly ones - Audeze LCD 2C

Those are no slouches!

If I do, I’ll certainly let you know.

Can highly recommend Forza Audioworks. He’s in Europe (Poland), but ships worldwide.
Matt made me a Mytek adapter for my Manhattan II and it’s great quality, not as stiff as Mytek’s own cable, and about the same price depending on your choice of cable and connectors.
I’m using it with Focal Clear and the stock balanced cable. 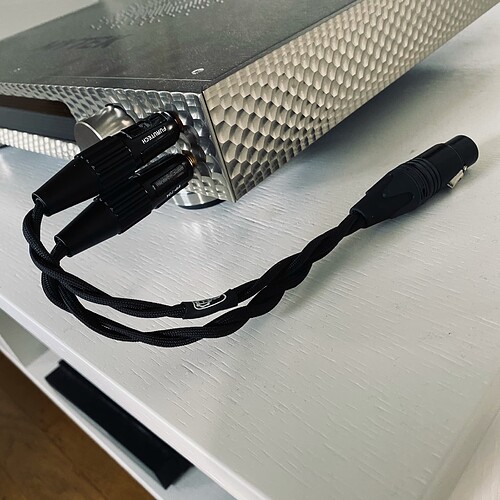 Can highly recommend Forza Audioworks . He’s in Europe (Poland), but ships worldwide.
Matt made me a Mytek adapter for my Manhattan II and it’s great quality, not as stiff as Mytek’s own cable, and about the same price depending on your choice of cable and connectors.
I’m using it with Focal Clear and the stock balanced cable.

That is one good looking cable!

Have you contacted Mytek for an update?

I have left a couple of rather pointed messages in the comment section of the order status page on the Mytek shop website. And I’m sorry to see your cc, because I do not feel that it should be incumbent on a consumer to have to ask a vendor when a product long since purchased will be fulfilled. And that it’s bad for consumers if we give vendors the impression that such information should only be required when the consumer takes the time to chase the information down. No. Proper vendor behavior - IMO - is to keep the customer informed.

Not too much to ask IMO.

To put a coda to this, after three weeks of no action, no communication from Mytek, I got American Express to reverse the charges. Which they were happy to do.

Then I placed an order with Corpse Cable. Really nice people. And they were up front about the fact that they did not have the adapter, but had to build it. But said they would build it quickly. And I’d say they did as it arrived at my house four days after I placed the online order.

Looks to be a bit nicer cable than that offered by Mytek, and with shipping it came out to be a few dollars less too. I would comment on how the cable sounds, but I can’t as any sound I’m hearing is the Corpse Cable adapter plus the Focal balanced cable. And I’ve not heard the Focal balanced cable with any other adapter, or without an adapter. But the combination does sound as good as I had hoped, at first blush.

Good to hear but not a good endorsement for Mytek for any future orders or possible warranty work even.

Glad you’re sorted! But can’t help wondering what’s going on with Mytek, if they stopped communicating with customers. And where’s their new procuctline that was said to be released “this summer”?
Could be a temporary glitch, but today I haven’t been able to reach their website.

Could be a temporary glitch, but today I haven’t been able to reach their website .

Their SSL certificate has apparently expired, without being renewed in time. If your browser will let you past that issue, you’ll see the website is very much still intact. But such a lapse still does not appear to bode well.

I would like to go on record saying I started this thread with the hopes of a couple of outcomes. First, as a warning to the community that things might be a little flakey at Mytek right now. Second, that Mytek might see it and decide to focus a bit more on the customer experience.

But I have nothing but respect for the crazy value of their audio products, and wish them the very best. Their continued viability is both good for them, and IMO good for us; audio consumers.