Complete artist chaos here. Some albums are listed as Neil Young. Others as “Neil Young / Crazy Horse” (these show up under “Neil Young” so not too bad. And then others are identified as “Neil Young & Crazy Horse” and are not found under Neil Young. What’s worse is the album info will reference the previous Neil Young album without naming it (thus no link) and that album is identified under the other “artist” so it is not listed in the chronology. Sigh. Can’t wait for the edit feature to clear this up.

When asked previously about the various Artist Names that his Albums have been attributed to, Neil said that each artist name on EACH album was a creative decision based on the amount of input into the album itself

Net result, some of this albums are deliberately named [on the label] as “Neil Young WITH Crazy Horse” [e.g. Everyone Knows this is Nowhere, Zuma]…while others were Neil Young & Crazy Horse [e.g. Live Rust, Rust Never Sleeps]…while others still were just attributed to “Neil Young” despite the presence of Crazy Horse in whole or part [e.g. Tonight’s the Night]

Oh, I get that re how Neil Young and other artists choose to identify their output. I was pointing out the different ways a “Neil Young & Crazy Horse” album is identified in Roon. My point about that still stands. Roon sorts the albums according to the “artist” , then year, so the “Neil Young & Crazy Horse” albums are sorted three different ways depending on how Roon has identified them. And for ones Roon can’t identify, well, they’re not included at all.

Elvis Costello is another artist where this is a bit of an issue, but not as much. “Elvis Costello & the Attractions” albums are identified only two ways, not three as is the case with NY&CH.

Sorry, but again you are incorrect

In Roon, all Neil Young “solo” albums are identified as exactly that…i.e. Artist = Neil Young [as per his preferred attributions, as well as the label on the disc / LP or side-spine]

For further confirmation, look at the subtle differences between the Artist name EMPHASIS and Font Size in the album label images below

And like I say, ALL Neil Young albums are easily accessible under his Artist designation…so very easy to find

This problem occurs with Jason Isbell, too. “Live from Alabama” is listed under “Jason Isbell & the 400 Unit” but NOT under Jason Isbell.

I have Neil Young and Crazy Horse albums identified as only Neil Young. And other Neil Young albums Roon can’t identify, so they are not accessible under artist description. We need the edit feature regarding metadata. Otherwise some albums are just lost to us in Roon.

All CSNY, Buffalo Springfield and Crazy Horse Albums are easily accessible via the above route… So it would be great if you would refrain from saying that the Albums are “lost to us in Roon”, because it simply isn’t true

I’ve never said that is what I want to do. My point is we need the edit feature so we can correct mistakes Roon has in identifying albums. I totally get the reason for the different identifications, the problem is there are albums Roon does not identify, or misidentifies that does not allow them to appear on the artist’s page. I’ve given examples.

Sorry, but you are incorrect here Ronnie, Zuma is the only Neil Young & Crazy Horse album that does not show up at all under the artist Neil Young. Being that Neil Young is the main artist of every record he puts out they should all fall under his discography, no matter who the backing band.

If you go to e.g. Harvest [a Neil Young “solo” album]…and then go to By this Artist…then Zuma does not appear here…because it is a COLLABORATION with Crazy Horse, as defined and agreed amongst the artists themselves…and therefore Zuma appears under the correct Artist designation of Neil Young & Crazy Horse

Being that Neil Young is the main artist of every record he puts out they should all fall under his discography, no matter who the backing band.

Do you think you should make that distinction or should he??

Consider another easier example…by any definition, an argument could be made that Paul McCartney was a “Main Artist” on The Beatles albums

Therefore, should all The Beatles albums be listed under the “By This Artist” heading when viewing a particular Paul McCartney album??

NO, of course they should not

But, if you go to Artists…click on Paul McCartney…then the Beatles albums will appear there, because Paul McCartney is rightly credited as being a “contributor” to these albums

Not in my library. Zuma does not appear anywhere on the Neil Young page in his main albums, or the appears on section. Please take a screen capture of your library, it could be identifying a different version of the album then mine, i don’t know… and please be a little nicer in some of your posts, you tend to be quite rude to people.

That it a stupid comparison and you know it, you now just want to argue with people for the sake of it which really sucks. 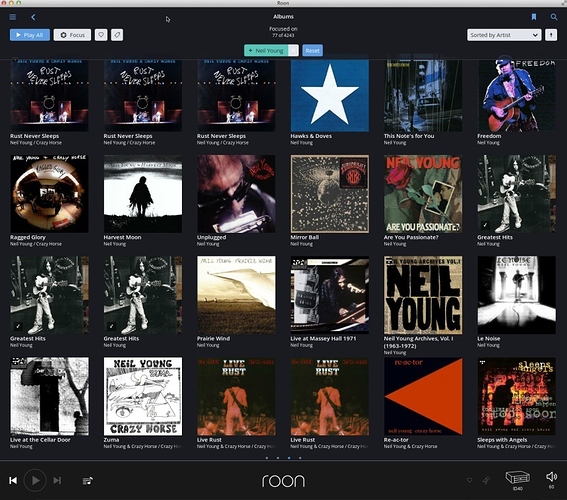 That is not a screen cap of the Neil Young artist page. You typed Neil Young as a tag, there is a difference.

Yes I know the difference, you are taking things so literal it’s funy and you are being very petty.

And again, you’re incorrect…it IS a Screenshot of the Neil Young aritist page…no Tags were used or were necessary

Alright, the page I meant was the first page with his bio and has main albums by release year and has the appears on section too. I don’t want this to get out of control, I love the roon software and come here to get improvements and learn. I hope the same is true for you rather then just telling people they are WRONG because they maybe don’t work with the program the way you do… that is all.