I have a large collection of Neil Young albums, most of which are aac purchased from the apple store. When I look in my Roon library they show as tidal albums. I guess he does not allow streaming of his music anymore so all the tidal albums listed show all songs unavailable. How do I get the roon library to show my albums that are in my library instead of the Tidal versions? I assume Roon is showing these because the Tidal albums are higher quality. Any ideas here?

all the tidal albums listed show all songs unavailable.

Where are you located?
I’m in germany and Tidal has ~40 Neil Young albums. I have checked a few and songs are all available
As Spotify didn’t have Neil Young and I also read his statements, I always thought, he only allow Tidal because of high quality formats.

Hey @Tim_Clardy – can you post a screenshot of what you’re seeing in app?

If you own an AAC copy of an album and have the same album in your TIDAL library, Roon may consider them to be duplicates and group them together, as described here. That also describes how you can remove albums from the set.

I’m surprised the TIDAL copies are showing as unavailable, but a few screenshots would help me understand this a little better. You should be able to just paste them or drag them into your response here. 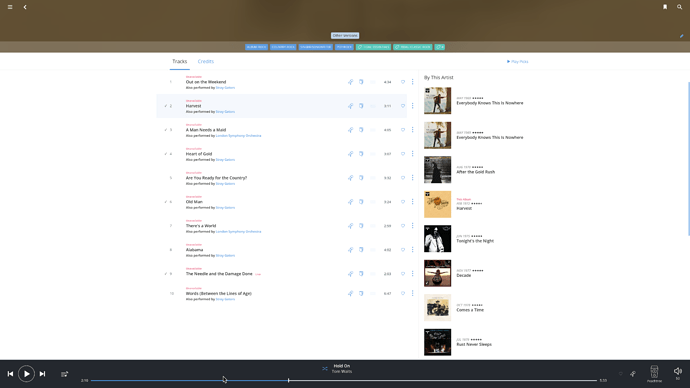 What has happened in the past is that an artist has removed an album and then replaced it on Tidal. This happened to me.

Anyway, if you can check that and let us know.

I tried this and when I clicked view album the tracks were available. But when I go into it from artist or albums they still show unavailable. Very weird.

Ok, that’s what I was expecting.

You’ll need to delete those Tidal albums in your library. Then you can bring up the AAC version again, click Other Versions, select the Tidal version and then Add it to your library.

Be careful that you’re deleting the Tidal version and not the AAC version.

Try it on one album to start and see if it works ok.

Edit: Tim, maybe we should get @mike or @vova to look into this before you have to search out and find all the unavailable albums and see if there’s an easier way.