I’m trying to import my music library into a new (trial) installation of Roon. For this evaluation, my setup is core running on a Macbook Pro, OSX 10.9.5, 2.6 GHz i5, 16 GB ram, SSD. Music library in on an NTFS-format external USB2 drive. Output is to USB DAC.

After loading 36819 tracks importing has stalled. I see a constantly spinning icon and a status of “adding music to library: of 89756 tracks, 0 added, 0 identified”.

Restarting computer & Roon doesn’t have any effect. The tracks that have been loaded can be played, but I can’t find a way to get the remaining tracks added.

Skipped files doesn’t report anything, and ‘clean up library’ doesn’t show anything to clean. What else should I try? 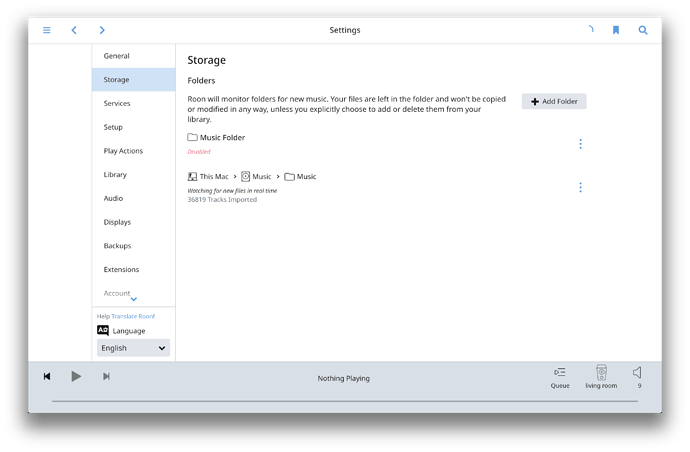 I’d like to enable some diagnostics on your account so we can take a look at what you’re experiencing here. Before I do this, may I ask that you please do the following and make a note of the time you do each:

Some other notes:
I started off with the music collection on an NAS. The drive was mounted as an SMB share.
The initial import stalled.
During this initial import a few files were logged as skipped and three as corrupted. I removed these from the drive.
The import progressed a bit further, then stalled again.
After that I removed the drive from the NAS, rearranged some of the files on the drive, switched it into an external usb enclosure, and edited the location of the watched folder.
A few more files were imported, then it stalled again.
I removed a few folders whose names were alphabetically around the stall point and restarted Roon a few times, left it running overnight, but import still appears to be stalled.
I can still play the files that were imported (other than those that I moved).

How long does this ‘analysis’ usually take? Is there anything else I can do to diagnose the problem?

Apologies for the delay here, Tony. Due to the holidays, the queue for the technical team is a bit longer than is typical.

The primary issue that the diagnostics report showed was that there were many errors related to Live Radio URLs that appeared to be causing issues for Roon. This is unlikely the root cause of your issue, but resolving this issue will help make things more clear in future diagnostics reports.

Can you share a screenshot of My Live Radio? Were there any stations that were manually added by you? Can you show what those URLs are?

I had planned to evaluate Roon over the holidays, so I did some tinkering and managed to get my collection imported. After making a copy of my collection on a FAT formatted drive and reinstalling roon things went much better. Last night I added a few radio stations, and attempted to add some stream URLs that were either invalid or not compatible with roon, so maybe those are the errors that your analysis pulled up? The URLs that I’ve set up seem to work fine.