The “New releases for you” widget time and time again misses out on releases I actively want to be notified of. Most noteworthy examples are the new albums The Car by Arctic Monkeys and What Came Before by Chase & Status. Both artists are in my top 10 of most played artists in my library (no 1 and 7 to be exact). Safe to say if a new album comes out, I would like this to be displayed in this widget.

@noris I see that you’ve moved this topic out of #support. Are you guys going on record that this is not a bug and behaving as intended? If so, what is the use case of the ‘New Releases for You’ widget?

Thanks for the feedback here, I’ve passed this on to our product team.

I’ve moved this out of support because it is not a technical issue that the support team can resolve, but rather the behavior of an aspect of the product, and any changes here would require general overall improvements to NRFY.

We do have some NRFY changes planned which should help improve release recommendations in the future, though I can’t comment on any timelines of when they will be ready. Thanks again for the feedback!

As @noris mentioned there’s work underway on NRFY as we speak. What you’re seeing is partially related to the timing of data packets we receive from our streaming services. Thank you for the opportunity to clarify the cause of what you’re seeing.

@noris @jamie Thanks for clarifying. Glad to hear there’s work underway. NRFY is a feature that I’d be eager to use for the use case I outlined. Looking forward to these improvements

Just a silly question but did you like them as well as play them? The Arctic Monkeys album showed up for me when it was released . I don’t play them to much but I have them liked.

The issue isn’t that I couldn’t find the release in Roon. Like you, it showed up just fine by using the built-in search in Roon, as well as just navigating via the artist’s discography.

The issue is that I didn’t know that the album was released, and I wish / expected that the ‘New releases for you’ widget on the home screen would recommend me the album. If it’s not gonna recommend new releases from my no. 1 and no. 7 played artists, then what is it going to recommend?

In the meantime, Qobuz can be of help!

They have new releases available on their website/Qobuz app every friday.
Even if you are not subscribed, at least you can see what is coming up.
If you are, you can heart new released albums in the Qobuz app, and they will be added to your Library.
If you use Qobuz website, and you heart an album, it. Is added to your Qobuz-My Qobuz albums, but not to your Library (at least in my case it is like this)
Dirk

They have new releases available on their website/Qobuz app every friday.

That is indeed helpful. I am subscribed to Qobuz. That said, It’s a shame I have to leave the Roon app. A viable workaround, if I weren’t so lazy to surf to the Qobuz website.

That’s where it showed up for me. On the home page in new releases. 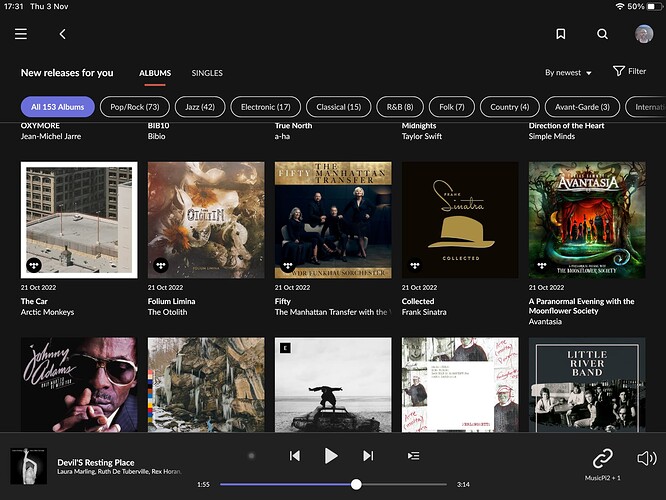 I suppose people get different results at different times under different circumstances. Such is the nature of AI.

There is huge room for improvement with the algorithm for Valence.

As an example, I don’t listened to Taylor Swift, have no albums in my library from her catalog. Yet she shows up in NRFY in both “Newest” and “Relevant”.

The band First Aid Kit, I have all albums from their catalog in my library, listen to them as recently as last last week, and have them “hearted” as a favourite. Yet their latest album Palomino, which is listed in their discography, still hasn’t made an appearance in NRFY. So if I didn’t subscribe to an All Music weekly release newsletter I wouldn’t know that album came out.

Just look at the Qobuz section in Roon it has most of the new releases in there. That’s what I use every week to find new albums, don’t bother with their own app. NRFY is useless as it’s always days if not weeks behind. 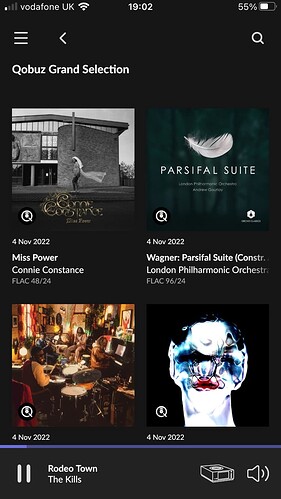