New Releases For You Not Displaying

I subscribe to Tidal and while using the Roon app on my Core machine (Windows 10, i5 8GB RAM) when I click on Overview I see Recently Added but below that is a Featured Artist and then Genres and then Tidal New Albums. See screen shot below. I am asking this because I just started a 14 day trial and received a “tip” about “New Releases for You” but it’s not there. 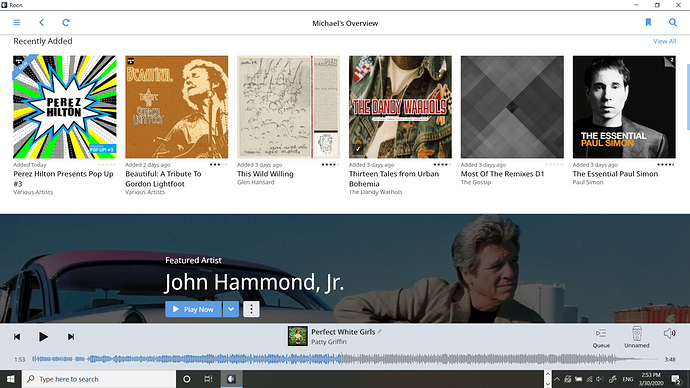 Is there any change if you reboot your Core machine?

Hi, thanks for the response. The only change after rebooting is that there is a different featured artist.

Do you see recommendations in other places? If you go to an album page do you see Recommended For You?

Hi, thanks again for the response. As you can see from the screenshot, no I don’t. 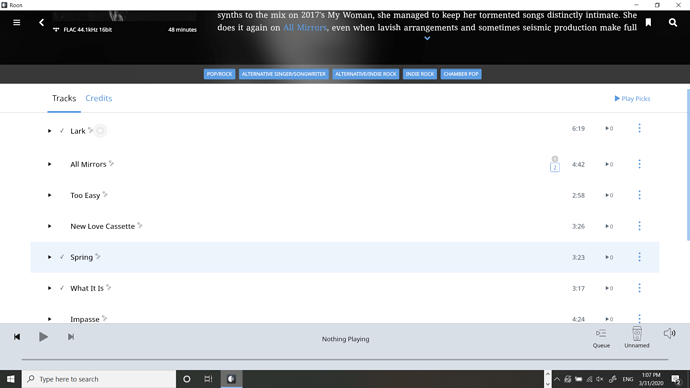 As well, compared to the screenshot you posted I seem to also have other information missing.

Thanks for the screenshot. Here’s what I’d like to try next:

Respond here with this information and I’ll enable diagnostics so the team can take a look at these instances.

Hi Thanks for the response.

I am having another Tidal related album problem. At 8:20 on April 1 I did a search for Ben Harper (the limit to library function was on off). The only albums that appeared were the ones in my library. I did this numerous times, turning “limit to library” on and off. When I open the Tidal app many more Ben Harper albums appear. Is there another setting somewhere I need to change?

I am having all kinds of other Tidal problems in Roon as well: New Releases for You not displaying,shuffle not working on the artist page and Top Tracks not appearing for several artists. 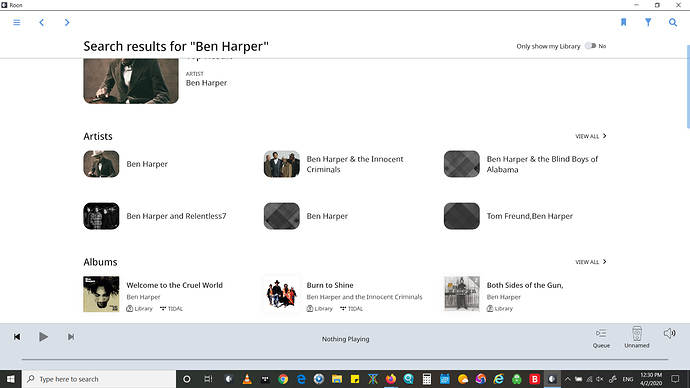 This is what I mean by the artist page 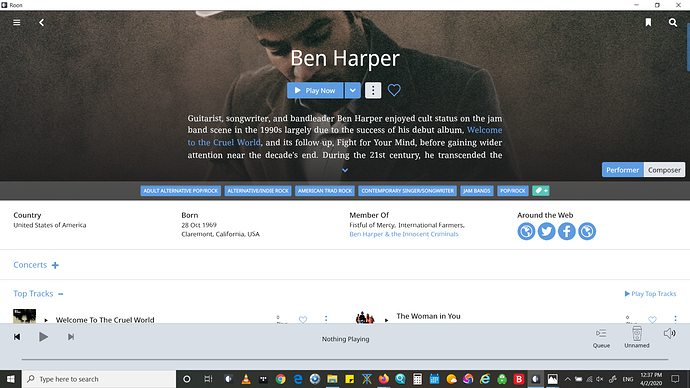 When I scroll down on the artist page this is all I see, the albums in my library 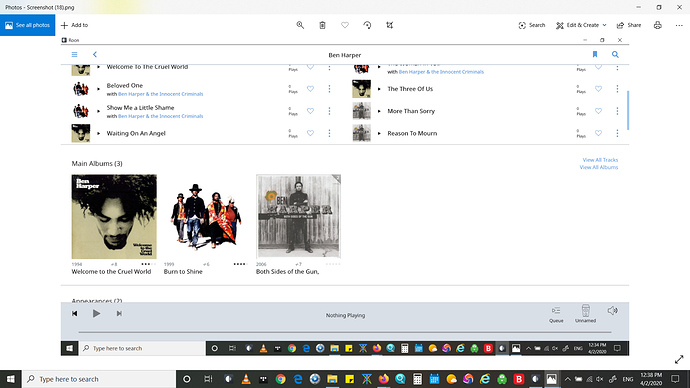 Can you please have a look at the rest of this thread. I am clearly having several problems with Tidal in Roon that others aren’t. Should I reinstall Roon?

New Releases For You not displaying

I’ve passed the diagnostics report over to our QA team to look here. There are some networking errors that I’d like their feedback on, but it’s looking like this might be related to your Core/Network’s ability to communicate properly with our servers.

Shuffle and Roon Radio not working on the artist page

There are a small number of reports similar to what you’re seeing here, and, based on diagnostics report, the errors appear to be similar. We’ve passed a report with data along to the QA team for further investigation on this.

Using the Ben Harper example, can you share some screenshots of what you’re seeing?

Generally, in all of these cases, it’s looking like there are some networking troubles at play involving your Core’s ability to communicate with our servers. This is not something that is affecting the vast majority of our users, so it is likely something specific to your environment that is resulting in these difficulties.

Do you have another machine that you can temporarily use as a Core machine? It would be helpful to know if all devices on the network are affected or if this only impacts the current Core machine.

Hi;
Thanks again for your response. I just changed the core to another machine - i7 2.6GHz 16 GB of RAM. Tidal in Roon is having the same problems it was on my other machine. I have no problems with Tidal when using the Tidal app.

When you say that this is most likely a networking problem, everything else on my network seems to be working just fine so I am not sure what you mean by that. Are you referring to firewall or antivirus software issues?

I forgot to mention that I was mistaken about the album issue on the artist page. Tidal albums or albums not in my library are showing farther down the page.

Are you referring to firewall or antivirus software issues?

It could be antivirus or firewall, or it could be something like a VPN or even VOIP that is causing a interference with the Core’s connection. Since this is happening from multiple Core machines it definitely seems like this might be the case.

An additional test would be to temporarily use hotspot or USB tethering to a mobile device. While this is not an ideal long-term network, this is a quick and easy way to test using a completely different network which will help to verify this theory.

Thanks again for the response. I disconnected my core machine from my network, rebooted it and tethered it via USB to my mobile phone which was also disconnected from my wifi network. Nothing changed. I still do not see New Releases or Recommendations For You in Overview or on the album page and when I click on “play now” on the artist page nothing happens except that I still get a “Roon Radio: Nothing Similar to Play” message. So it doesn’t look like it’s a network problem. But if it was, would the other Roon functions also not work? I still get metadata for my library and focus also works with my library. This seems to be a Tidal specific issue.

I forgot to mention in my last response that on my other core machine where I have the same problems, the only antivirus software and firewall used is Windows Defender. No VPN is used on either machine while using Roon.