New releases in Qobuz are fine but a mess in Tidal

Every Friday new albums are added in both Qobuz and Tidal. in Roon, the Qobuz new albums are added smoothly and shows a correct copy from the mobile/desktop application.
In Tidal, everything is a mess. in the overall “What’s new” tab the latest album is The Weeknd from last week. When diving into the different genre tabs the first one is “Swedish” (yes I live in Sweden :)) and nothing is there. Empty. The next one is “Pop”. The first album which is displayed is The weekend new album from last week and the next one is Halsey from 27th of August, the album after that is Ehyhypen from 12th of October and then, suddenly, Vaultboy EP from 14th of January 2022. In the “Rock” tab there is three new albums from 14th of January and then an album from 1980 shows up and then one from 21st of February 2020.

Why is everything working smooth and logical in Qobuz but not in Tidal within Roon? Outside Roon, both services deliver new albums perfectly well (within iPhone and desktop application ). Am I doing something wrong with my setup?

Thank you very much for taking the time to explain in detail the behavior you’re experiencing. We’re so sorry about the trouble.

Based on what you’re describing, it does narrow down the issue to the communication between TIDAL and Roon only.

As a first step, would you please clear your TIDAL cache? To do so, please:

Thanks for your reply, I have now done that and tried to restart Roon. The problem is still the same though when checking in on Tidal.

One other thing I noticed though is that Roon is much faster now, a remarkable difference

I’m really glad to hear that the steps suggested above have helped, even though not in the way we expected it to.

I know what I am about to say is an uncommon ask, but could you please give it a few more days? After chatting with our team about this, we believe it might be related to some delays in the update of TIDAL lists.

Would you please follow up in a few days (Monday would be a great time, as we’re out of the office on weekends) if the issue isn’t fixed?

Thanks for your answer and I have done some research since last time. It’s a fact that Roon now is much faster responding my commands. So I am curious about the cache, is that something I should do on regular basis? If so - the way to do it seems tricky (if not having the knowledge that you shared with me).

I have now counted the new albums added in my Tidal app outside Roon and it is exactly 100 new albums. The headline says “proposed new albums” to be correct.

Inside Roon and in Tidal, the tab “New albums” contains 13 new albums as of 21th of January.

So in total it’s almost the same now even though I haven’t checked if the titles are the same. Fair enough

One suggestion could be to see all the new albums together in the “New albums”, now its just 13, the rest is spread out in the different tabs.

Thanks a lot for the comprehensive reply. To get a better idea of what exactly might be at play here, would you please share a screenshot from the Roon software on the TIDAL tab and from the TIDAL app itself.

In other words, would you please share a screenshot of the New Albums in TIDAL in Roon? And then, the TIDAL app screen showing the new albums. Let’s focus particularly on the Swedish albums, for example, that are zero in Roon.

Sorry for my late reply. I think that the Swedish tab is gone also in Tidal outside of Roon so we can let that one go

Here is a screenshot from New albums in Tidal inside Roon. Outside Roon on my desktop app it is over 110 albums. 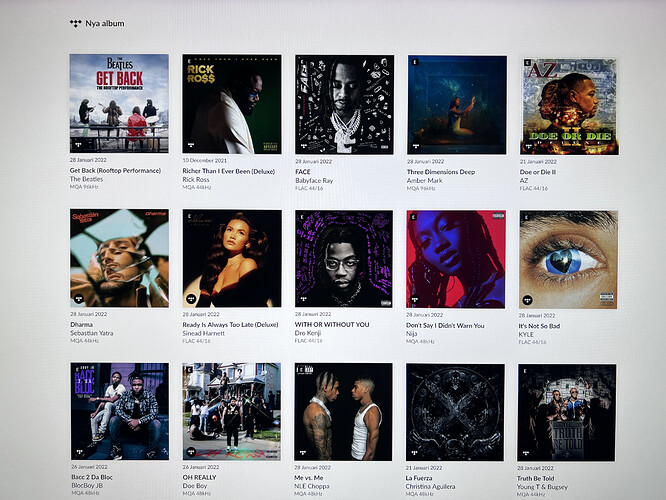 Thanks for that screenshot. If you scroll down, there’s no Show More button, or any other albums displayed? So, Roon is showing 15 albums out of 110 that you have in TIDAL?

Could you please also share a screenshot on what the equivalent screen in TIDAL shows? 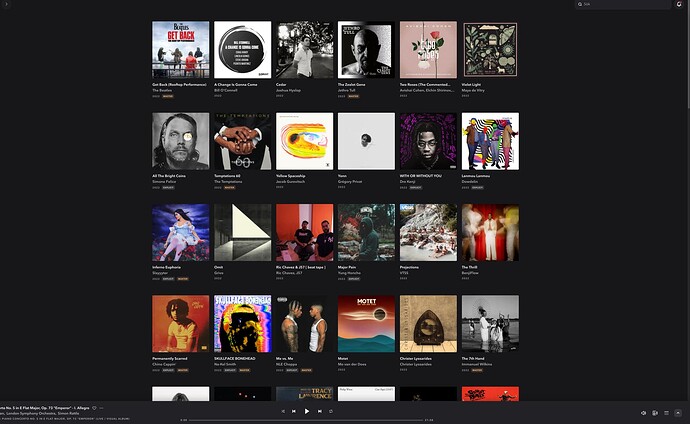 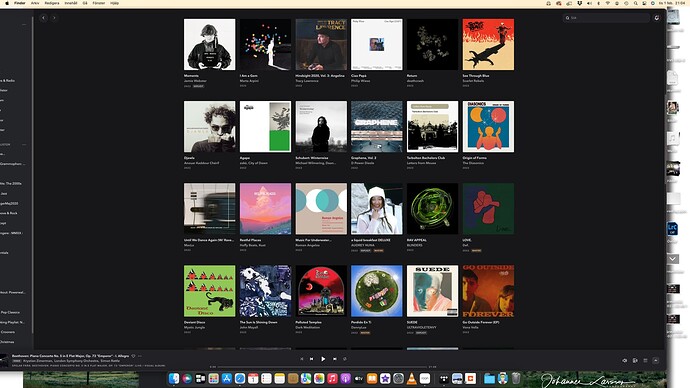 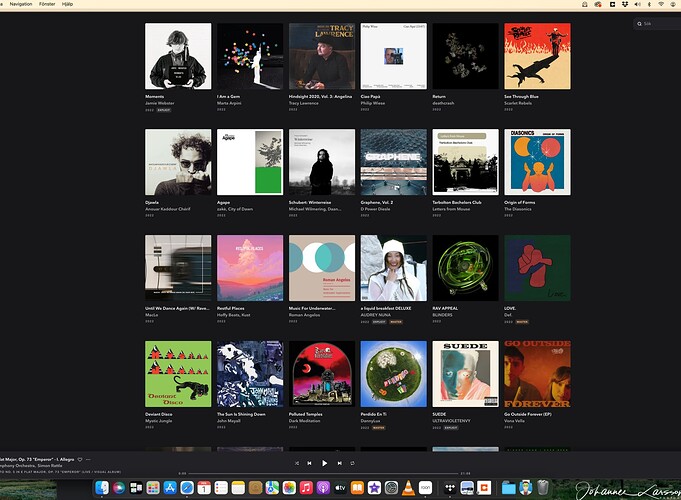 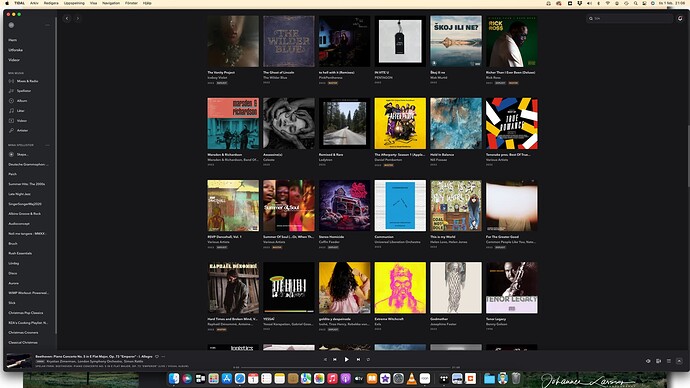 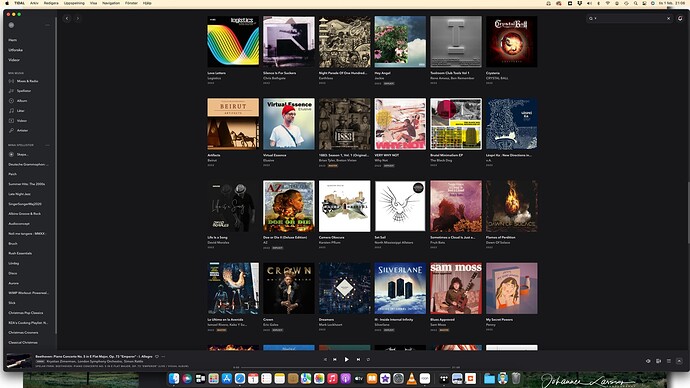 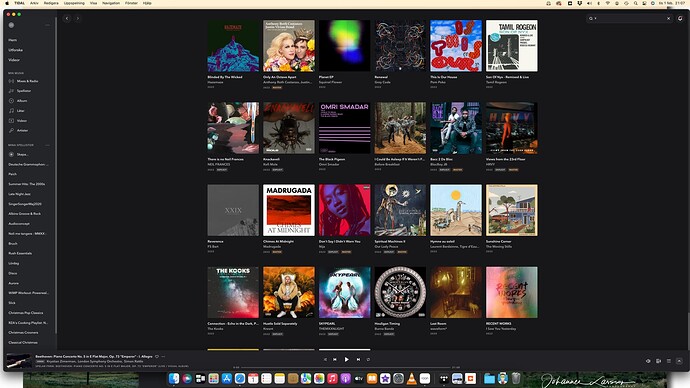 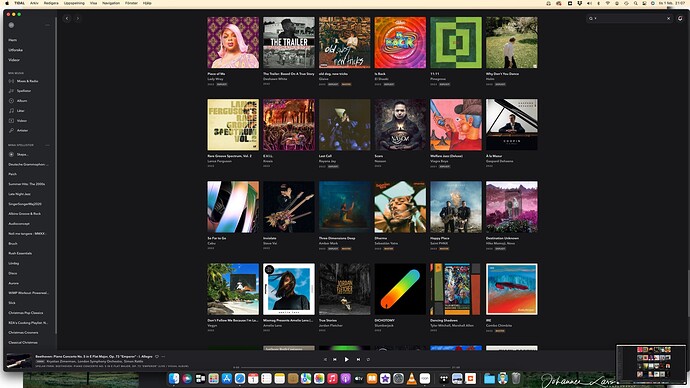 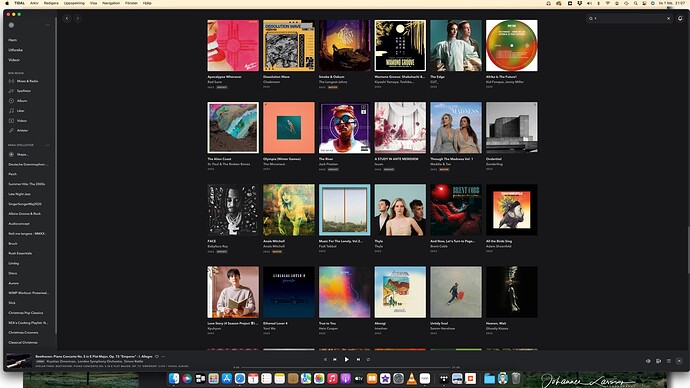 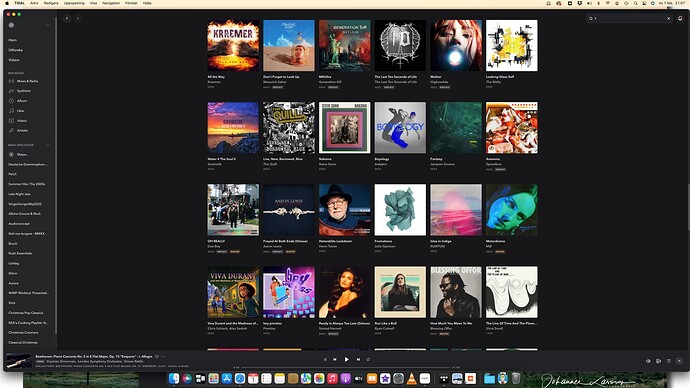