As i am new to roon and multiroom audio, i have a few questions about setting up a multizones playback server.
Unfortunatly i couldnt find the rigth topics here, probably because i dont know the rigth keywords to search for.

I have a Win 2012 server running roon server core with a build-in 7.1. soundcard/chip.
I also have a 8 channel amp, and i would like to setup 4 zones with stereo playback.

Is it possible to use the build-in 7.1 soundcard: f. ex. L/R channel for the kitchen zone, LR/RR for the bath …

I only see the 7.1 soundcard as one output device in the settings panel?

Thank you very much in advance for putting me in the rigth direction.

Yes, probably. Roon DSP has a channel matrix function that can be used for duplicating, rerouting, etc. Give that a try.

First, check that in Device Setup/Channel layout your Soundcard Zone is set to 7.1 channels.

You’ll find the Mix tools in: 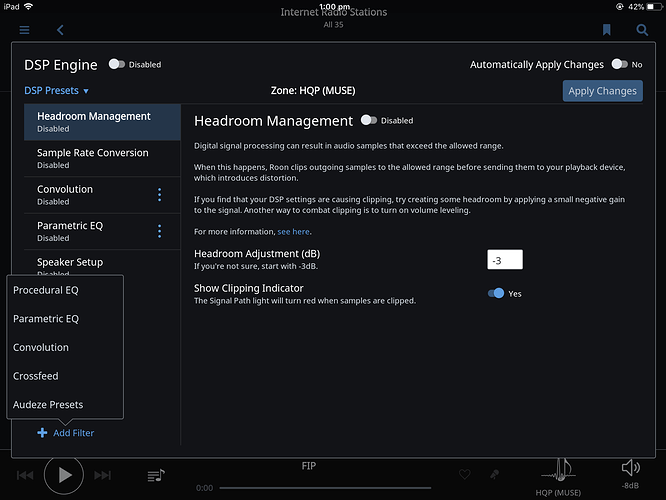 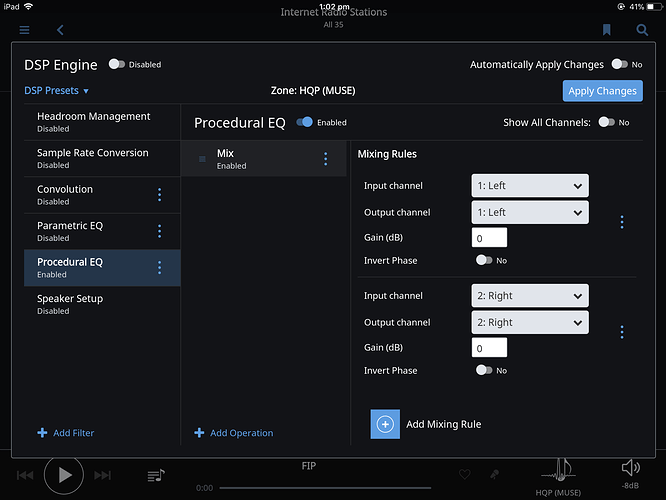 The Mix tool should enable you to map L/R Stereo inputs to desired 7.1 Channel Outputs.

Roon also has its own multi-room capability between compatible Zones.

But, that still is only 1 endpoint or Roon Zone. You would just be sending the same audio stream out to each speaker pair.

Daniel, you are thinking about this from a Roon network perspective. But Steve appears to want to use analog output from his multichannel sound card, then analog input into his multichannel amp, which he would be using as a de facto home distribution amp. In other words, his equipment and wiring would take care of multiple zones – Roon would not be needed for that function.

There’s no way to do this purely within Roon. Roon is built for high quality audio playback, which requires an independent, selectable sample clock for each device. That requirement is at odds with what you are trying to do.

You might be able to work out a solution with an intermediary. Your goal is to get the four devices to present separately to Roon as ASIO or WDM/WASAPI drivers. I know that asio4all can join devices…maybe it can split them too? Not sure. We don’t officially support it

Thank you very much for your quick and helpfull answers.

But, that still is only 1 endpoint or Roon Zone.

Your goal is to get the four devices to present separately to Roon as ASIO or WDM/WASAPI drivers.

But as roon only sees 1 soundcard i only can create one zone.

I will look into asio4all.

Is there a multichannel PCI Card/ USB product that could do the job for my 4 stereo zones.

My server (where roon runs) only has on PCI slot free.

Not that I know which has Roon support. Your best bet is a NAD CL 580. Review thread linked below

Eric, I hadn’t yet bought these units because I wanted to make sure they worked with Roon properly, but based on Avrom’s feedback I did and can report all is working properly and these are great units. Thanks for following up and the great support!

Is there a multichannel PCI Card/ USB product that could do the job for my 4 stereo zones.

It would probably be more cost-effective to get a USB hub + 4 separate stereo USB DACs.

The DACs can be as expensive or cheap as you like. Here’s one for $8. You were planning on using motherboard audio before–I doubt that something like that would be any worse in terms of sound quality.