Hi, I have a 5 year old refurbished laptop with Windows 10, 64 bit. This is connected to a Teddy Pardo DAC.

Error message comes up that there may be a hardware problem.

I have played music from my hard drive through Windows Media Player without any problem.

I have selected USB DAC as the audio zone. No sound. Last night I also enabled. System Output as a zone.

That seemed to work but then the music started to sound like a scratch CD or digital radio with an intermittent signal.

Today no music through Roon.
Slow to open up music folder on laptop.

Can you confirmed that you have all of the latest drivers installed? 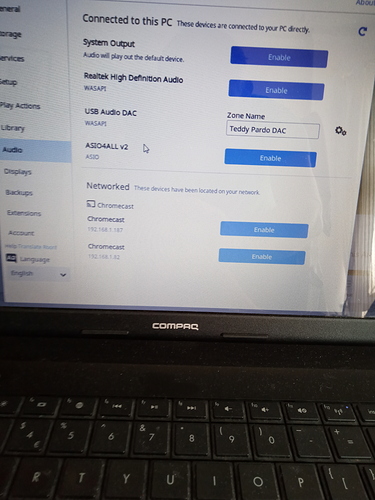 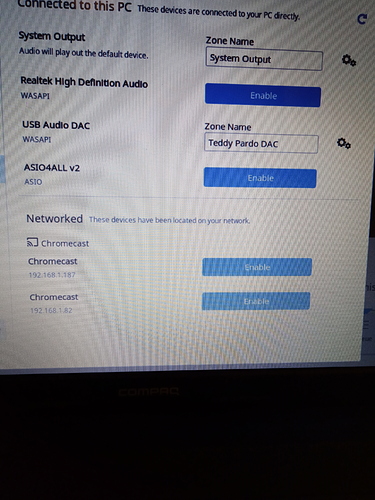 Got some music playing via Qbuz on Roon app. Played an album on hard drive via Winamp OK, but there were a couple of pauses for a split second.

Thank you for sharing those screenshots. You mentioned that Winamp played most of the album ok, but that there were still a couple of pauses.

Can I please ask you to try to reinstall the driver for the DAC and try using a different USB cable for the connection and see if the problem still persists afterwards? I would also try a different USB port on your PC in case that is related.

Does that help with this issue?

Hi,
Thanks for your help.

I have bought a new USB cable and used it to connect the hard drive to a different USB port. I downloaded the driver for my Teddy Pardo DAC this afternoon. I un installed and re installed Roon on my laptop.

I loaded up Roon and played some recently ripped music from my hard drive. It plays but the pauses for a couple of seconds several times during the song. I would not be able to play music to a visitor if it was like this.

I play the same music via Winamp. Same pausing.

I then hook up an old hard drive that has stood still for 2 years. Same pausing of music.

Yesterday I spoke to a guy at a computer repair shop. I think I might be going back…

Thanks for trying a different cable.

I play the same music via Winamp. Same pausing.

If Winamp is displaying similar behavior, there are 3 possible sources for this issue:

You can verify the first aspect by trying the DAC on a different Core PC, if it exhibits the same symptoms we can move on to theory #2/#3.

I would also reach out to the Teddy Pardo support team to see if they can help investigate this issue. Perhaps they have beta drivers for the DAC or are able to run some diagnostics on the DAC remotely.