I have a similar problem like the one described with “tracks from several albums in same folder” here.
I try everything to make Roon know an album that I have created of my own, i.e., in "real world - and of course - in the Roon database there is NO such album and it will never be. However, Roon does everything to identify this “artificial” album and does split my collection created into two albums, I don’t know why…

Things would be so easy if Roon would have a feature “play ALL tracks located in a specific folder”, i.e., if Roon would have a folder view.
Being focused on real world albums etc. alone it is VERY difficult to create a track collection of my own choise, assembled in an artificial album but stored in only ONE folder…

Nothing stopping you creating playlists. Otherwise edit the tags for tracks in a folder with a tag editor and give your compilation an album name

I had already implemented your proposal “edit the tags for tracks in a folder with a tag editor and give your compilation an album name”. But I was not able to see this “artificial” album as ONE ALBUM in Roon. I could not figure out why but Roon does split my album into two different ones…

Perhaps some tracks do contain a VERSION information and your import is set to detect this information? a VERSION metadata tag for example?
Can’t think of anything else, since just tested … as long as albumtitle is the same and album artist tagged to ‘Various Artists’ all works as I would expect this.
if I tag 3 titles VERSION = Remaster I end up with 2 albums.
And I end up with multiple if I do not tag album artists being the same for all.
I’d say roon does it the same way most other software does.

In order to do what you want to do, you will have to edit the tags of the individual songs so that they look like 1 album by Various Artists.

To this end, all the tracks need to be in the same directory that is named the album you are calling it - example “TEST ALBUM”; in the tracks’ tags, you need the Album Name to be your album name you need the tracks to be sequentially numbered and the disk tag to be 1, and you need the album artist to be “Various Artists”.

Just made a compilation album in Roon, see below: 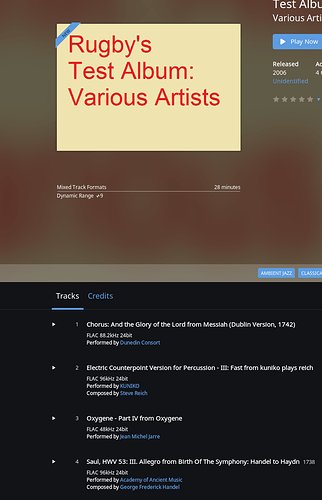 Thanks for your suggestions.
I tagged all the files as proposed by you and by @Rugby. Album folder has the same name as the album itself, All tags are numbered sequentially and have #disc=1. Album artist is “various Artists”.
The only thing I cannot edit is the “VERSION” tag because none of my tag editors will display it.
Therefore I disabled all version detection information during import in Roon settings.
However, I still end up with two albums. Nothing has changed

Could you send 2 screenshots from 1 title of each resulting album?
3 dots on the track then file tags. Perhaps something springs to mind when seing the actual embedded information.
Unsure if you use Mac or Windows, in case of Windows I’d suggest looking at the tracks using mp3tag which also handles flac and would allow you to correct any embedded data incl. VERSION if being present.

Thanks for looking at my topic!
This “problem” is really Roon specific: I just imported my album into JRiver MC24 and into Audirvana+ for Windows - both players will display the album as ONLY ONE album, as expected.

Roon File Tags for a representative of the FIRST album: 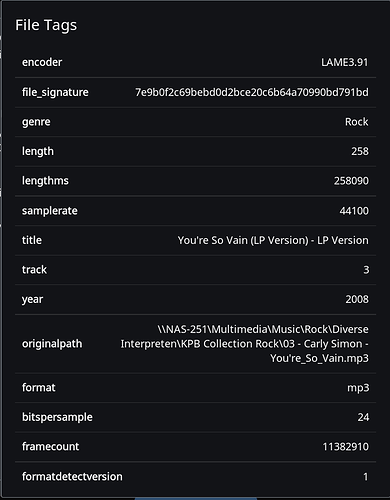 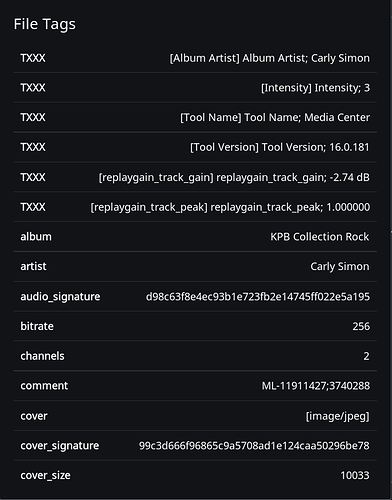 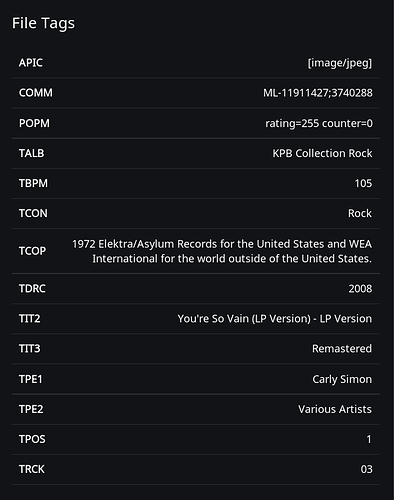 File Tags for a representative of the SECOND album: 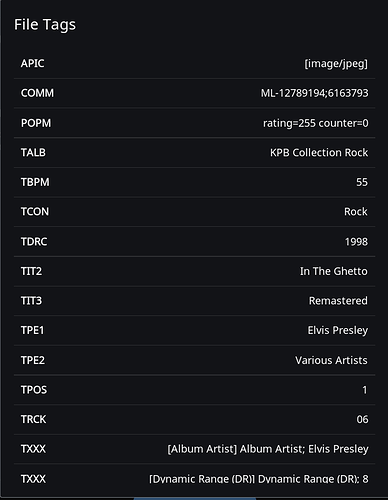 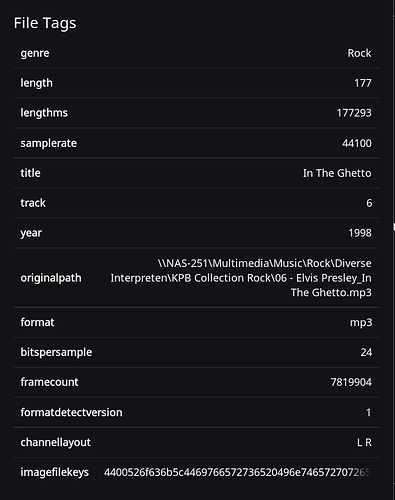 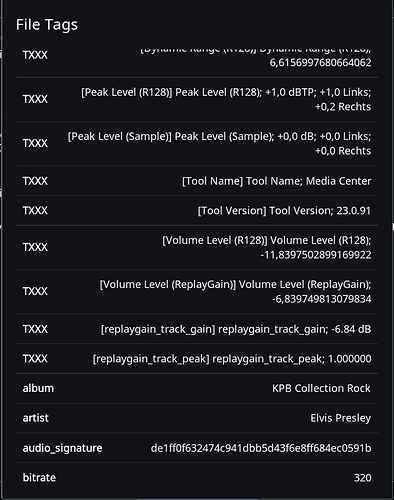 Perhaps this information will give you some hints for the album split.

BTW: I just have de-installed MP3tag for Windows because I could not find the VERSON tag in its tag colum collection… but that’s another story.

Hmm … TPE2 is set correctly … would roon split upon different TDRC values?
I must admit I’m not that familar with mp3 id3v2.x tags nowadays simply because I survived that plague around 4 years ago, simply wiping them all in a rush for the gods sake. Audio was poor and metadata concepts fail so often I gave up with it.

But I did a quick test.
Took 2 files, placed them into a newly created folder within the folder roon watches.
And even differnt dates result in both tracks being part of 1 album.
Thus it really only seems to depend upon albumtitle and albumartist I’d say.
Which is stupid enough since if I have 2 albums with the same title but with differnt releasedates it’s anything but 1 album. I would rate this a bug.

I do run out of ideas.
What happens if you rename the title of the first track by removing “(LP Version)” ?

Indeed, creating a playlist that assembles all titles from my compilation seems to be the only way right now. I could not convince Roon to take all my titles as being from the same album, no matter what tagging effort I made…

Perhaps if we knew how this portion of the Roon process really worked, it would be easy to set up a custom album.

Wonder who would know?

I fully agree with you.
(Our) Roon life could be so easy if I just could tell Roon *with only 1 single checkbox or button": Just take my files from my album as they are - no further Roon intelligence is requested during this step - every information should be taken from my file metadata. That’s it.
However, there are so many possible (clever) adjustments inside Roon to assist and to guide this process that your question still remains: WHO has really the full picture needed to understand what’s going on in detail when importing a private file collection…

A quick story related to your last post: last weekend, I set about the task of determining how Roon manipulates/concatenates/munges tag data into what appears on its screen, particularly Artists, Album Artist, Primary Artists, Ensembles, and Conductors. I wanted to see if I could ever tag an album that would not need tweaking once imported into Roon. (It hasn’t happened yet; 3500 albums and counting).

Thus far, I’ve “broken my pick.” About the time I’d figure out that “this changes that”, up would pop an exception. To complicate matters further, Roon occasionally ignores tag changes, as if things weren’t mysterious enough!

So WHO indeed has the full picture!?

It’s not 1 button, but you certainly can. I leave most of my Opera CDs “un-indentified” which means that Roon only uses my Tags; because I like how Roon sorts my tagged Opera into Acts/Scenes which it looses when it is Roon identified. 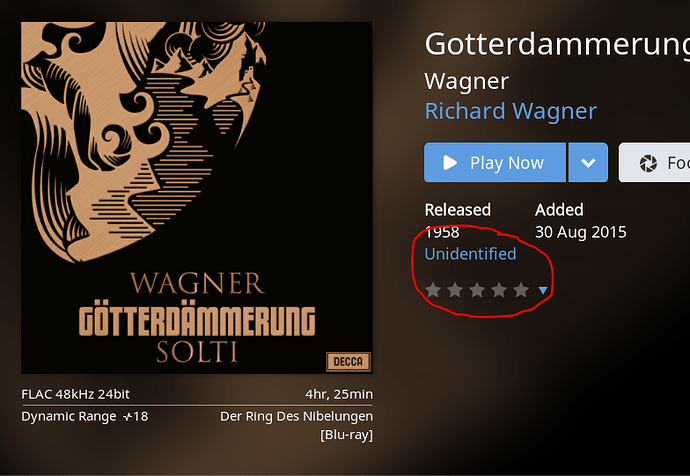 Yes it’s true: You CAN create compilation albums that show up as you might have expected.
I myself succeeded in a few cases too. But other attemps did fail and I still do not know why.

For example, today I have imported an album from a ripped CD. It could be identified by Roon and everything looked fine. But when it came to replacing two of the 16 bit titles with Qobuz 24 bit songs I ended up with two albums. Both albums have the same title, same cover, etc. One contains the two 24 bit HiRes songs, the other album contains the 16 bit CD songs.
I’ve tried everything possible with different tag editors to merge the two albums and to force Roon to only take my own file tags (driving Roon into the “unidenfied” direction as you mentioned): No chance! Roon has its own magic.
Creating personal “compilations” with Roon still remains a “Magical Mystery Tour”. But again - there might be a method to create the structure you really wanted - but definitely it will be not an easy one!

So, at the end I guess sometimes Roon simply is a little bit “too clever” - doing everything to satisfy its own philosophy instead of satisfying its clients…

But when it came to replacing two of the 16 bit titles with Qobuz 24 bit songs I ended up with two albums. Both albums have the same title, same cover, etc. One contains the two 24 bit HiRes songs, the other album contains the 16 bit CD songs.

I’ll bet there’s something subtly different in the metadata of the files. That’s usually the reason why Roon will split out files into a separate album.

I have to say that I’ve been able to make my own compilation albums without issue, but I keep metadata to the bare minimum required. Using dbPoweramp as the tag editor.

I couldn’t see but has the OP tried “merging” the two albums in roon? This has occasionally happened to me and that has fixed it.

It is a pain because roon will complain about duplicates and then you have to renumber both discs to “1” and renumber a lot of tracks as well.