Not possible to merge artists when Roon has no meta-data for one of them?

Is anyone having this issue? I am coming across this problem in two cases:

Case 1:
German or other non-English spelling of classical artists is extremely common, probably the majority case with public metadata from mega-labels such as Deutsches Grammophon. But it is essentially the same problem with major labels like Erato from France or BIS from Sweden. Here are two extremely common examples of arguably the world’s most preeminent orchestras:

I cannot merge Berlin Philharmoniker with Berlin Philharmonic Orchestra because as far as I can see Roon has no metadata, for Berlin Philharmoniker. I have tried a few random tests for German and non-English spellings of some of the worlds most famous ensembles. It is not an isolated example. The end result is that I often find myself stepping out of the Roon environment into the Windows directory structure to hand-locate albums I know I have but Roon misses. Of course, I can always change my own tags to English spellings when this happens (all the time), but it is all very hit and miss and effects every corner of my library and is a bit impractical.

Case 2
I am also finding a very similar problem where there are two German or non-Englsh names for the same artist but the word order is reversed. So for example:

“Staatskapelle Dresden” is the correct form. But Roon instead uses “Dresden Staatskapelle” which is some kind of anglicised version that reverses the word order to approximate English grammar. The problem is that most libraries would be tagged with the first form.

In both cases although Roon can display the German forms or can be groomed to do so, Roon provides no hyperlink for the German forms so I assume it has no metatdata. But the knock-on effect is I cannot see how to merge the two versions. Am I missing something? I have tried ‘filters’ but they do not seem to work if Roon has no meta-data but maybe there is a simple way of merging I have missed?

Also. A very similar thing happens in English as well.

All the most preeminent English composers and artists eventually end up with a title. This is again extremely common. For example, the famous EMI recording of Elgar’s Cello concerto (Jaqueline du Pre).

I don’t really understand what the purpose of such a link would be or what possible meaning this one off collaboration is supposed to have? What makes sense to me is that there should be 3 separate hyperlinks for the 3 separate artists.

What I am surprised by is there is a hyperlink for a titled mega ‘synthetic’ artist:

I don’t really understand what the purpose of such a link would be or what possible meaning this one off collaboration is supposed to have? What makes sense to me is that there should be 3 separate hyperlinks for the 3 separate artists.

These merged links occur because the metadata sources that Roon uses have got it wrong. You can use the Album and Artist editors in Roon to correct this in your library. Long term, Roon is hoping to address this issue:

This Tidal album has merged Daniel and Martha into one artist. Please can they be separated? [image]

How did you merge Vienna Philharmonic Orchestra and Wiener Philharmoniker? I cannot merge them because I cannot bring them both up in a search or a filter so that I can actually highlight them both and perform the merge?

Thanks Paolo but I said it a bit wrong. Maybe someone has some inspiration?

In my case if I go to Artists and put in “philharmoni” in the filter, all that comes up are Artists for which roon has metadata. For example, I have more than 80 of these strange ‘merged’ artist strings which have some kind of “philharmoni” component. There are even landing pages for these non-Artists (with no content). Also “Vienna Philharmonic Orchestra” comes up, it is hyperlinked and it has a landing page.

But the problem is that "Wiener Philharmoniker which is an artist, does not come up in this filter, does not come up in a search and yet has an un-hyperlinked reference plastered all over the library in literally dozens if not hundreds of places. I am probably completely wrong but I get the impression that only Artists with metadata can be searched for or filtered for which means the “Wiener Philharmoniker” I have cannot be merged with another version of the artist for which there is meta-data.

Maybe someone has had similar?

And thinking about it, perhaps the reason why you have an explicit “Wiener Philharmoniker” entry is because at least one of your albums with this orchestra has not been identified by Roon, so Roon has used the metadata from the tracks. And if one of these tracks has “Wiener Philharmoniker” as an artist, then Roon has used this metadata to create an Artist entry in its database.

which is actually confusing as “Wiener Philharmonic” never shows as a (suggested) search result: you have to pick “Vienna Philharmonic”

a much better option would be having both “Vienna” and “Wiener”, then Roon showing all albums from both whichever one picks

And if I search for just “Wiener”, it will return the above results, plus additional artists and performers associated with Vienna/Wien: 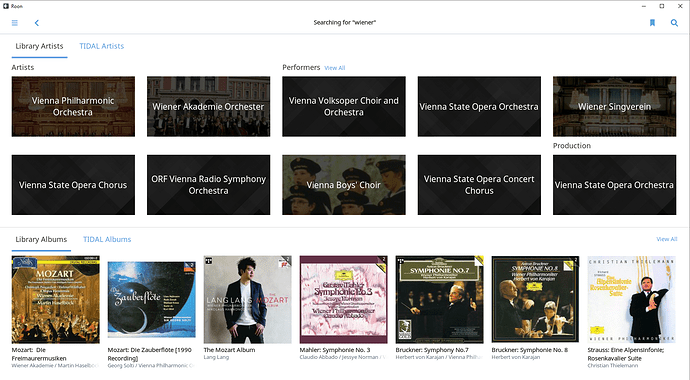 but in a few years I won’t remember that I joined “Vienna” and “Wiener” and I’ll get mad trying to figure out why, searching for “Wiener”, it will never show unless I pick “Vienna”

(not to mention I had to pick “Vienna” as main artist just because “Wiener”, which actually is the correct name, has no metadata

I’m clearly missing something here, because I don’t see what the problem is. If you’ve merged the artists, it doesn’t matter whether you search for “Wiener” or “Vienna” because both search terms will work and give the same results.

when searching for “Wiener”, “Wiener” will never show as a “search criteria” (the one you pick to have results displayed)

you have to pick “Vienna”, then results for both “Wiener” and “Vienna” will show 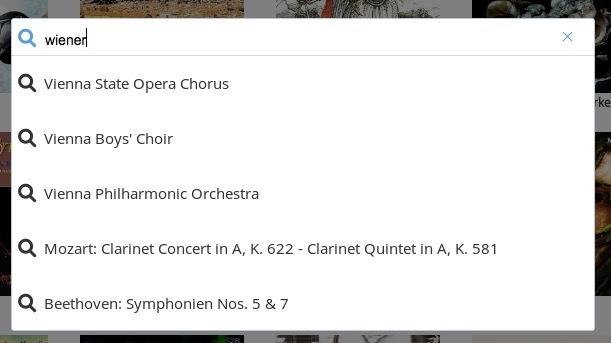 Are you sure? Perhaps you’re using a different search from me:

exactly: can’t see “Wiener Philharmoniker” in your search either

as I wrote, in a few years I won’t remember merging “Vienna Philhramonic Orchestra” and “Wiener Philharmoniker” and I’ll get mad. Same if a friend searches my music library without knowning I merged those

But the whole point is that you don’t need to remember that Wiener Philharmoniker is the same as the Vienna Philharmonic Orchestra - Roon does that for you, and whichever terms you use will produce the same results. I still don’t see the problem.

I still don’t understand you. Searching for Wiener Philharmoniker produces results… It leads somewhere, not nowhere. Are you saying that when that search produces entries for “Vienna Philharmonic Orchestra” that you don’t know that this is the same orchestra?

Geoff… imagine searching, in a dictionary, for a term which has different “forms” (one less and one more common)