Not to pile on, but what's your BIGGEST 1.8 pet peeve?

For me, it’s that you can no longer see whether a track/album has been added to a playlist.

I have a giant “Dinner party jazz” playlist (hundreds of mellow jazz tracks), and I add albums/tracks all the time. Viewing the album in 1.7 there’d be a subhead for any track that tells what playlists it’s in. Now, nothing.

Duplicate tracks in playlists is now going to be pretty common, i reckon.

So, hopefully they can bring back the playlist labels, or at least alert me if I’m adding a duplicate track. (The latter will probably be tricky, as each track has a unique ID, whether it’s tidal or qobuz or local, and the bitrate, and which pressing/release, etc… so it’ll only be able to tell if you’re adding the exact file.)

Seriously, all software upgrades go through growing pains. I have been involved with many.

But playlist visibility just seems like such a specific, valuable, critical product feature they decided to do away with, and I’m not sure why.

But playlist visibility just seems like such a specific, valuable, critical product feature they decided to do away with, and I’m not sure why.

I hadn’t spotted that one, but I agree, that’s annoying.

My biggest pet peeve is they sold us on that marketing garbage from the emails and demos over the past week. NONE of those new “Valence views” appear for me in any UI. Hell, I have stockpiles of the artists used in the screenshots, and none of them match what’s advertised.

I’d feel a little let down by that, but the UI bugs are everywhere. Scrolling on iOS devices has this subtle lag and jump that literally causes me headaches. The features we were given no heads up on being gutted are now gutted (tagging in particular). Inconsistencies like burying the bookmarks a level deeper so it’s not visible on a phone. Completely inconsistent with the rest of the UI’s on other devices. Launch the app to Home and see “HELLO” in big white font with black space everywhere and none of the dashboard panels in view. It’s mindblowingly bad. Worse than that the performance of simply changing views is TERRIBLE. Takes 10-15s to load my Miles Davis page.

This version was supposed to increase connections, but Roon still isn’t fixing simple bugs in search that they’ve known about for years. For example, filtering for “1994.12.01” for a live album returns NOTHING. They’ve had this bug for 2 years and done nothing to fix it but want to brag about how good search is. Ha!

Basically nothing about the advertised release other than the general appearance matches what I was sold all of last week and updated to. With bugs outstanding for years and this release introducing a plethora of performance and UI issues while taking away recommended albums, making a great tagging feature into a completely amateur one… just so disappointed.

I expect none of the major complaints get fixed for months if ever given bugs not being fixed for years already. It’s just an astoundingly bad attention to quality, and makes me think Roon doesn’t even have a QA leader in their company.

Biggest peeve: the increase in size of albums and artists on their respective pages. I quite like the new visuals elsewhere, but as I spend quite a bit of time perusing the main pages, particularly the albums page, this is definitely a major peeve.

Lots of small ones too, but listing those wouldn’t answer your question.

My biggest pet peeve is people piling on and lack of appreciation for the Roon team. I am confident Roon will get it sorted. Hope they are not too demoralized by the communities response and know that many are deeply appreciative of what they have created.

+1 on the missing track subheds that listed playlist(s) the track’s in. Miss that one already. Are others missing the vertical scroll in playlists?

Roon app for Windows 10 still mouse-scrolls backward. Down is up, up is down.

The thread title. It’s a classic use of the word BUT. You actually mean the opposite of whatever comes before it. Often used subconsciously, it’s a useful insight into the way people are really thinking.

A bit like ‘the right honourable genetleman’ as used by our politicians in the UK. Which basically means 'you t***er!

The changes to the placement and sizes of things.

Why is the album title GIGANTIC (and in an ugly font) and the rest of the text so tiny?

Pat Metheny has an album called “Day Trip” (incredible music & sound quality, BTW) and Roon splits “Day” and “Trip” onto two lines? And then there’s a world of empty space to the right of that. What the hell is that?! It’s weird and doesn’t seem to serve any purpose, which is true of a lot of the changes in 1.8.

Things that are functional are smaller and harder to read or reach or are gone altogether, while things that matter less or not at all are huge. And did I mention the vast amounts of empty space?? Plus lots of things are asymmetrical. I won’t bother to list more examples because there are so many and other users have been over them several times.

It’s difficult to imagine who thought these changes were a good idea.

I miss the alphabet letters on bottom, to allow me to quickly go to a specific artist…its missing on version 1.8, so for my large library, I need to scroll thru a lot of artists to get to where I want to go. Hope they bring that back…a b c d e f g h i…if I want to go to Sade, can’t just click on the ‘s’, and get closer to what I want anymore

Not having settings for album cover sizes on “My Albums”. On 15" laptop I get max of 10 visible at a time. Used to get many more.

This one is a big one for me, too.

Missing the alphabet bar at the bottom of My Albums that facilitated jumping to a particular range of albums rather than having to scroll through a gazillion titles.

The entire approach, where tags aren’t added to albums, rather, albums are added to tags, is something I simply don’t understand.

Tagging needs to be fixed. Apart from that I really like 1.8 so far.

My biggest pet peeve is that the Queue button was reduced in size and was moved away from its spot in the lower left portion of the screen (within thumbs reach on a tablet) to a crowded place in the center near the play buttons. If anything, it should have been made LARGER and more visible. Am I the only one here who makes changes to the queue?

I miss the alphabet letters on bottom, to allow me to quickly go to a specific artist…its missing on version 1.8, so for my large library, I need to scroll thru a lot of artists to get to where I want to go. Hope they bring that back…a b c d e f g h i…if I want to go to Sade, can’t just click on the ‘s’, and get closer to what I want anymore

@Bob_Princenthal and @Greg_Thompson and @John_Toole – I was annoyed by this, too, but then discovered that using the Filter at the top of the view allowed me to type in the desired artist quickly and Roon then shows all albums by that artist (all the ones in my library, at least). So far, seems to work well, and I think it’s faster than first selecting “S” then “A” then “D” then “E”, and it takes me right to only the albums by that artist, rather than to the beginning of that section of my library.

For example (and this works for me on iPad as well): 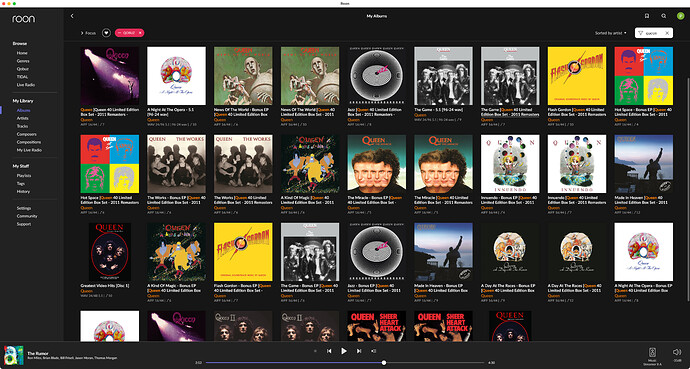 Hope that’s helpful. (Won’t help of course if what one really wants is just to get to the “S” section of the library).

That it took more than a year of waiting for us to get a version of ROON with LESS functionality.