Hi to everybody,
I recently bought an Intel based mini PC i710710U with fanless housing as a Roon server and a linear power supply for it. My issue is that there is no way to make the computer starts when it’s connected to the LPSU, it works with the default switched PSU only. I’ve tried with two different plug and power cables and no results. The output voltage is the correct one (19V/up to 7A.) The LPSU lit on but not the computer.
Any idea/advice will be much appreciated. Thanks.

Must be a power button somewhere on the Intel minipc

Only reference I could find was to internal power and reset buttons.

What model of LPSU is it?
Do you have any way to measure the output voltage at the actual connector plug (could be a faulty DC lead or wrong polarity)? Measuring under load would be preferred.
Is the DC plug itself the correct type to fit the NUC input skt? The plug should look identical in size to the one on the stock NUC SMPS.

The issues have to revolve around voltage and current. Although a NUC can run off as little as 12v (and I’ve been on this forum advocating that in the past based on the machines I’ve used) you are better using a 19v supply for the later NUCs. Later NUCs are also more current hungry in the boot up phase so with a borderline PSU the NUC won’t see the right conditions to boot successfully.

Thank you very much to all who has replied to my help message (Henry, Tony, TheHammer and Wizardofoz.) Each reply gives me some clues and helps to find out what’s going on with it.

Trying to reply to all of you at the same time, I would say that first I’ll try to test the output voltage with a multimeter measure it under load and see if it’s a polarity issue. Perhaps it’s due to it.
I’ve tested two different power cables, both with the right diameter (5.5 mm outer 2.5 mm inner) so I’d discard a power cable issue.

Taking in mind that you will have already deduced that I’m not a genius in electronics, I’d also discard a NUC malfunction because it perfectly works with the PSU supplied with it.

I ordered the LPSU with the same specs as the switched one supplied with the unit (attached shot.)
Well… thanks to all one again and I let you know if I achieve to make it works. 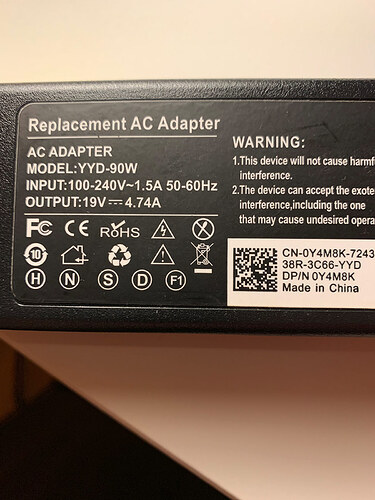 For that processor, it is commonly specified with a 120W PSU, not 90W. However, you have it working with the 90W, so probably not the issue. Can your LPSU supply the 7A@19V? If it can only supply 7A@12V you may have an issue. The LPSU may reduce the available current at higher output voltages, leading to a shutdown of the output voltage at startup as the NUC demands a high switch on current.

Thanks, Tony for staying here.

In fact, there is one data I didn’t mention before and it’s that LPSU supports up to 200 W power transformer. Since I am quite lost in that matter, please be so kind to take a look at the complete specs I have about the unit. Perhaps they will be useful to you to help me.

Product description
Introduction:
All-discrete topology.
Single-pass, series regulator design. No IC (integrated circuits) are used. This allows complete design control over all operating points and parameters for superior performance. Low noise, high PSRR.
Use of EMI filters, this version is mainly used in PC class, sustained peak 10A (1 hour), Continuous operating current should not exceed 7X24H 7A (depending on the ambient temperature may be) the main consideration cooling efficiency.
A constant-current source feeds a zener diode as a stable voltage reference. A low-pass filter (with a corner frequency of 1.6Hz) prevents zener noise from being introduced into the error amplifier. This is an effective yet lower-cost alternative to expensive voltage reference ICs. The low-pass filter also provides a soft-start characteristic.
The output noise (unloaded) is less than 13µV at 24VDC output (measured using a Tangent LNMP (low-noise measurement preamplifier) and a Fluke
187 50000-count DMM in ACmV mode). The output noise is even less when the output voltage is lower. This is much better than the noise of an IC regulator based PSU tested under identical conditions.
The error amplifier is a discrete implementation of an opamp with a high open-loop gain of 102.5dB. The voltage supply to the error amplifier is isolated with capacitance multipliers to boost its PSRR (power supply rejection ratio). This greatly improves the line regulation performance of the PSU.
A long-tailed pair differential amplifier with current mirror and constant current source forms the first stage of the error amplifier. The second stage is the voltage amplification stage (VAS), also with constant current source load. The 3rd stage is comprised of the ower MOSFET output devices configured as a source follower.
High-current MOSFET pass transistors, Two paralleled high-current, highly reliable MOSFETs (rated at 18A each) serve as the “pass” transistor. The high current rating provides a very high safety headroom against overcurrent damage.
The use of paralleled MOSFETs divides the heat dissipation, simplifying thermal management. Onboard heatsinks can be used which would allow this PSU to supply up to 1A continuous (with much higher peak currents). More sustained currents are possible by using larger, offboard heatsinks.
The negative temperature coefficient of MOSFETs prevents damaging thermal-runaway conditions that may plague conventional BJT devices, No current-limiting.
Main purpose:
◆ Upgrade XMOS CM6631 TE8802L etc. USB interface DC power supply
◆ A variety of USB-powered digital equipment, charging your mobile phone
◆ A variety of digital devices such as amp/ DAC/HIFI audio player
Size: Width 212mm * High 90mm * Deep 257mm
Transformer Power : 200VA
Weight: About 6.5kg
GX16-2 PIN Plug Polarity: “1+”, “2-”
DC Plug Polarity: Internal"+", External"-"
DC Plug size: Outer diameter 5.5mm, Internal diameter 2.5 mm

Thanks but there is still no listing of output voltage against current. 200VA is just the maximum input power. It is the output voltage and current that is important.
For 120W capability for the NUC you would need outputs of either:
12V@10A
Or
19V@6.5A

Any voltage inbetween is fine provided that the current is sufficient to deliver 120W.

Note that these figures are the maximum the NUC will need. Most of the time it will probably consume quite a bit less. My 7i7 NUC is barely warm to the touch so I estimate it is consuming 40-50W or so most of the time.

Many thanks, Tony. I really appreciate your effort and time, hopefully, I’ll finally make it works. If it’s so, I’ll let you know.

I searched the product description and found that it is copy and pasted to different products with different voltages, some at 12V only.

See if you can check whether your LPS does output 19V, and the polarity.

Return it if you can.

Hi to everyone,
After your contribution to helping me, I think that I owe you an explanation.
Finally, I could make it works. The seller told me that I should try to remove off the CMOS battery inside, on the motherboard. Well… as simple as that. Now is working fine. After that reply, I also asked him what the battery does but he hasn’t replied yet.
Thanks a lot to all of you.

I find it surprising, but if it works for you, then that’s good.

The CMOS battery keeps the BIOS setup data and clock running even if the motherboard is powered off.

Without the battery, you’d better keep the PC powered up at all times, which is appropriate for Roon Core anyway. This assumes, however, the LPS is safe to use 7x24.

You are right, it’s a surprising and strange case.

After doing more tests, the situation has changed and the issue is a real mystery, to me at least.

Just as a curiosity, this is the situation right now.

I’ve had to re-install the battery because if not I’ve to log in on Roon, Tidal, and Qobuz each time. Yes, with the battery it works too but only if the LPSU is switched on and connecting the computer through the rear plug (5.5 x 2.5mm.) Mystery. If I try doing it conventionally, I mean hitting the computer’s power-on button, it doesn’t startup. So, if I want to power off the LPSU when not working, which would be as it should be, to make it works I’ve to hook up manually the rear connector. I know, it seems a witch’s tale because I can’t find any explanation for that, but it is what it is.

The only way to achieve it works normally is by leaving the LPSU switched on 24/7 and I don’t know if it would be safe. If I do so, I can switch on/off the computer by the power button. What a mess!

I’m not to give up. I’ll take the computer to a technician and we’ll see if he’s able to find out what’s going on.

I’ll take the computer to a technician and we’ll see if he’s able to find out what’s going on.

If you need to pay for that and he’s not someone who can diagnose a power supply, it’d probably be going to be a further waste of money.

If the original NUC power supply works normally, but your LPS causes these strange behaviors, it’s clear the LPS is the culprit.

Thanks for your advice, Peter.
Finally, I didn’t take it to the technician. It’s working fine except for the way to connect it. I have to hook the connector (5.5 x 2.5 mm) by the rear panel and then switch it on by the on/off front button. I know, quite strange but it’s mandatory.
This small effort deserves by far the improvement in sound quality. There is a much more big sound stage, substantially better, and the micro details are clearly more defined as well as the voices. I would never go back to the switched PSU.
In fact, I think that it must be the computer which has a strange behaviour since it’s feeding well other devices, I’ve tested it.
Well, this is it. Thanks so much to each one who wrote to help me.

Hey @JJFT , I’ve been following your thread silently so far not being sure what you’re after, really.
Think I finally got it, and actually always wanted to ask if there isn’t a BIOS setting for restarting on power restore, so it would boot up on switching on your LPS’ AC-side.
Is that what you’re after, or am I still not seeing the forest for the trees?

The only way to achieve it works normally is by leaving the LPSU switched on 24/7 and I don’t know if it would be safe. If I do so, I can switch on/off the computer by the power button. What a mess!

If you feel your LPS isn’t safe to be powered on 24/7 then please get a different LPS. An LPS can’t tell whether you are in the room with it or in your bed or on vacation. I’ve had a 12V 100VA Zero Zone powering a 7i5 NUC that’s been on straight for pretty much four years, except for the occasional re-arrange, clean out, etc. That’s how they (should) work.

Thank you for your post, Charles.
It’s reassuring to know that you’ve used an LPSU ZeroZone for so long working 24/7. Mine is also from the same brand so, for my convenience, I’ll try to leave it powered on. By the way, after these four years, did you change yours to a better one or does it still working fine? Thanks again.